Trip Report:
- After a great week of training I figured Sunday would be a good day for a challenging hike over Garfield, Galehead, South Twin, and North Twin.
- Left Five Corners at 6:15am, Garfield 9am, Galehead 10:45am, South Twin 11:45am, North Twin 12:20pm, Gale River Trailhead 3pm, finished 4:15pm. Temps 5-15 degrees, good views of Pemi Wilderness from Garfield, socked in the rest of the day, breezy on South Twin summit and very cold!
- The Gale River Road is closed in the winter so I started the hike out at 'Five Corners' off US-3 in the dark. I'm not a big fan of road walks but it was a pretty short and quick 1.5 miles over the newly constructed bridges on the Gale River Road to the Garfield trailhead.
- The Garfield Trail was well broken out and the trail ascends gradually with no steep spots.  There are no views along the way but it's a picturesque hike in the snow laden woods.  The only downside to this trail is the semi-annoying switchbacks as the trail gains the ridge.
- Views from Garfield's summit were pretty cool, there was a purplish early morning glow over hovering over the Pemigewasset Wilderness.  I didn't hang around for long because of the frigid temps and what might lay ahead of me on the dreaded Garfield Ridge Trail!
- Going into this hike I had psyched myself up for a trail-breaking sufferfest along the ridge to the Gale River Trail junction. Luckily by some miracle for the first time in weeks there would be no major trail-breaking today!
- The previous day two brave souls (Jeff and Karine) broke trail to the Gale River junction and what's even more impressive is they stayed exactly on trail the entire time which takes some super skills.
- However, the hike to the Galehead Hut was still annoying as ever with numerous PUDS (pointless up and downs), high snow levels, and snow bombs falling from every branch along the way.
- Once past the Gale River Trail junction I was thrilled because the trails would be all broken and packed the rest of the day.
- When I reached the Galehead Hut it was off to the awesomely boring summit of Galehead.  I carefully avoided dead end bushwhacks I made my way to and then up the frost trail where most branches were at face level because of the snow depths. I avoided getting my eyes poked out but got whacked in the face a few times.
- At the summit I put on some dry layers, refueled, and took a picture of the buried summit cairn and got the hell out of there!
- Next was the steep ascent up the Twinway to South Twin, usually I book it to see how fast I can hike the 0.8 miles but today I played it safe and just went at a steady pace all the way up to the breezy low visibility summit of South Twin.  I didn't linger long on the South Twin summit, it was really cold so I hurried over to the North Twin Spur Trail and quickly descended back into the woods and out of the wind.
- I finally ran into the first hiker of the day just before reaching the North Twin summit where of course there were no views.
- The hike back over to South Twin wasn't to exciting but the descent down the Twinway to the hut sure was as it was a slip-slide-speedfest complete with controlled and uncontrolled "white-washes."
- The highlight along the 4.0 miles down the Gale River Trail was the first snowbridge over the Gale River, which If you're zoning out you'd never know your walking over the river.
- Now came the final 3 miles on the Gale River Road back to the car, yes I'm a bit delayed as I could have just headed right instead of left and cut half the mileage off back to Five Corners. I was pretty beat up and cold but it was time to suck it up! I passed a ranger on a snowmobile and got passed by a dozen snowmobilers including a few that pretty much ran me off the road!
- I made it back to the car a little before dark and immediately stuffed thousands of calories of yummy in my face! 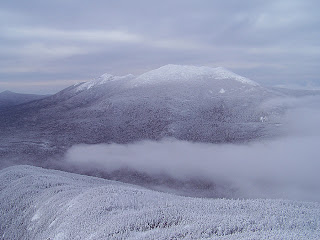 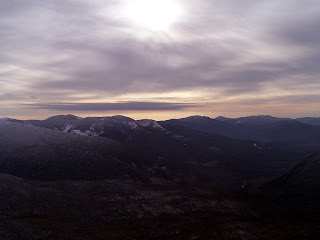 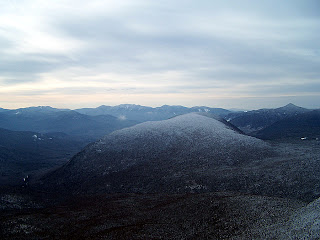 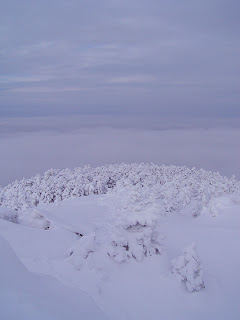