Trip Report:
- After my last two trips with friends it was time to head back up to the White Mountains for a much needed solo hike and what better hike to do than an out-and-back of Zealand, West Bond, Bond, and Bondcliff Mountains!
- On trail at 7am, Zealand 9:30am, West Bond 10:45am, Bond 11:15am, Bondcliff 11:50am, finished 4:30pm. Temps in the high 20’s low 30’s, no wind, in the clouds up to 4,500 feet, in and out of the clouds with undercast above making for unique views.
- It was still pretty dark when I hit the trail but since the Zealand Trail is pretty tame it wasn’t a problem and I made good time eventhough the trail was a wet and muddy mess with a few spots dusted in snow.
- I stopped in at the Zealand Falls Hut around 8am and it was packed with a couple of parents and two dozen “tweeners” cooking up pancakes. I received odd looks from the kids as I was re-organizing my gear to get ready for the ascent. The parents offered me money and beer to carry their kids back to the parking lot ($2 a piece)! Apparently the heavy rains from the day before made for hellish flooded spots on the Zealand Trail.
- The hike up the Twinway was in rougher shape than I expected, chopped up frozen snow and ice making for slow going until I wisely put on my microspikes and zoomed up with no problems at all.
- It was very cold and the views were socked in and I thought the day was going to be short lived as I was planning on turning around at the Bondcliff Trail junction if the clouds didn’t move out and as I got closer and closer to treeline I was still in a grey depressing viewless trek.
- However once I reached the Alpine Zone I was welcomed with hiking above, in, and out of the clouds with kick ass views!
- I was making really good time (and warming up pretty good) when I reached the summit of West Bond and had some pretty cool views. After leaving West Bond I ran into the first hiker of the day, which was nice as I was starting to think I was all alone up there!
- Next stop was Mount Bond where I enjoyed incredible views of Mount Washington in a sea of white undercast as well as West Bond, Lincoln, Lafayette, and South Twin popping up above the clouds as well.
- I headed down to Bondcliff hoping the clouds would clear below 4,500 feet, unfortunately that did not happen as it stayed socked in. I came across a hiker doing a two day Pemi traverse, he was headed for the Garfield Ridge Campsite. I refueled and warmed up on Bondcliff and while I was relaxing I saw a dog about 30 feet away emerge from the clouds check me out from afar and then disappear back into the clouds, I heard his or her owner but couldn’t see them!
- The hike back up to Mount Bond was sluggish as I hit my first wall of the day, but luckily once I popped back up out of the clouds I was re-energized from the views from Mount Bond where I came across two more hikers who had hiked in through the awful conditions the day before and stayed at the Guyot campsite.
- The hike back to the Twinway junction was a pain as the snow is all chopped up in places. There was a couple at the Twinway/Bondcliff Trail junction heading over to Guyot who had hiked in the day before to the Thirteen Falls Tentsite who said the water crossings deep in the Pemi Wilderness were pretty sketchy the previous day.
- Now I entered back into the clouds and started the long slog back to the car without any views. Along the Way I ran into “Big” Earl and Sue, who I have ran into before on a previous hike or two. They were doing the Zealand-Bonds Traverse out to Lincoln Woods. Hopefully the views were still opened up above 4,500 feet for them so they could get a pretty cool sunset!
- On the way out I stopped in at Zealand hut to take a quick break, unlike this morning there wasn’t a soul around and it was wicked quiet!
- The last couple of miles was rough as I was starting to feel tired and cold but it’s relatively flat so it went by fast. It started to snow very lightly as I reached the car making for a perfect ending to a pretty awesome hike! 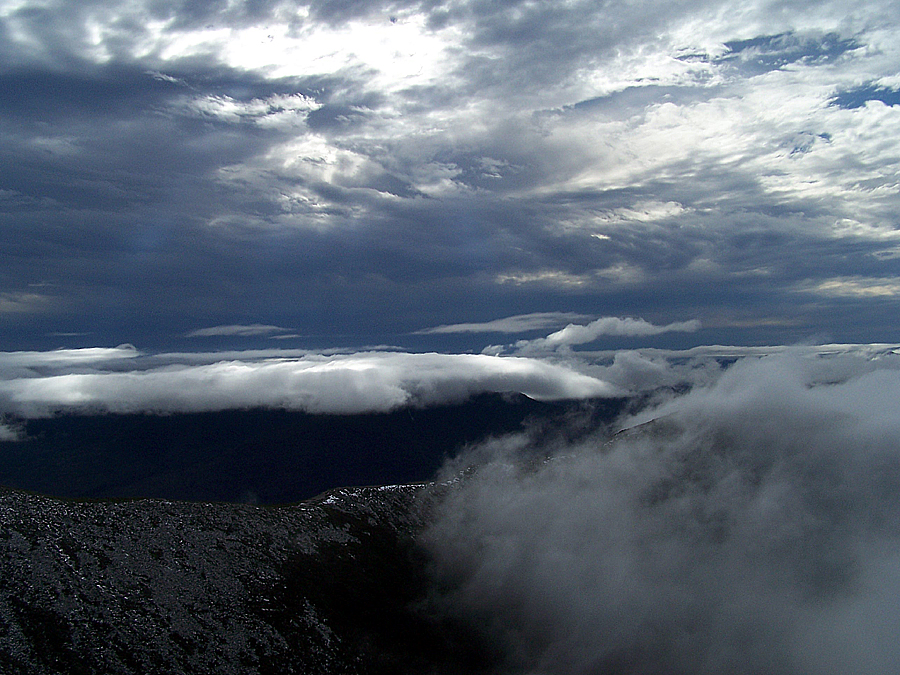 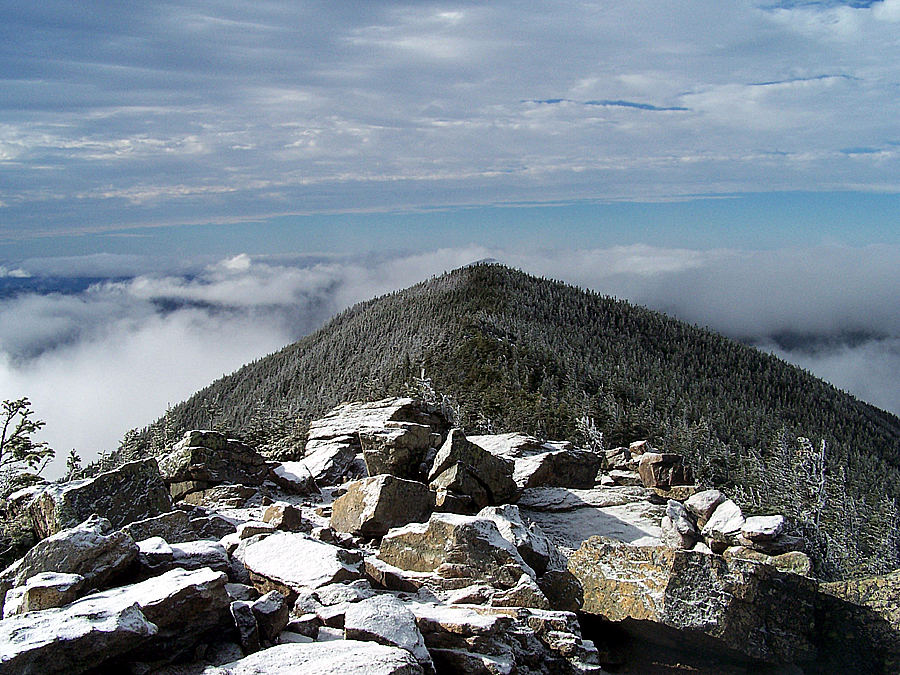 West Bond with Lincoln
and Lafayette in the Distance 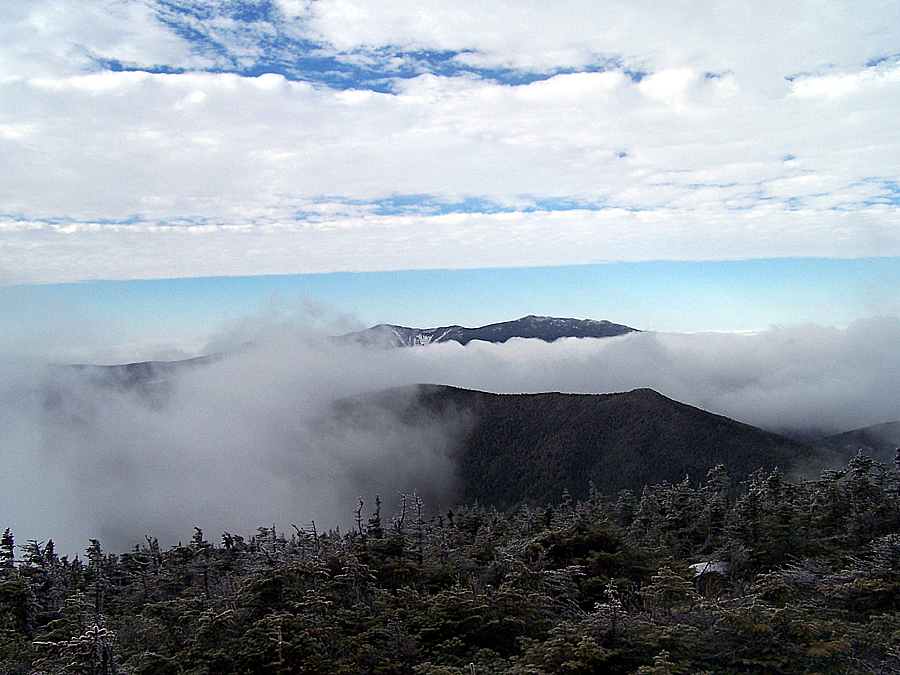 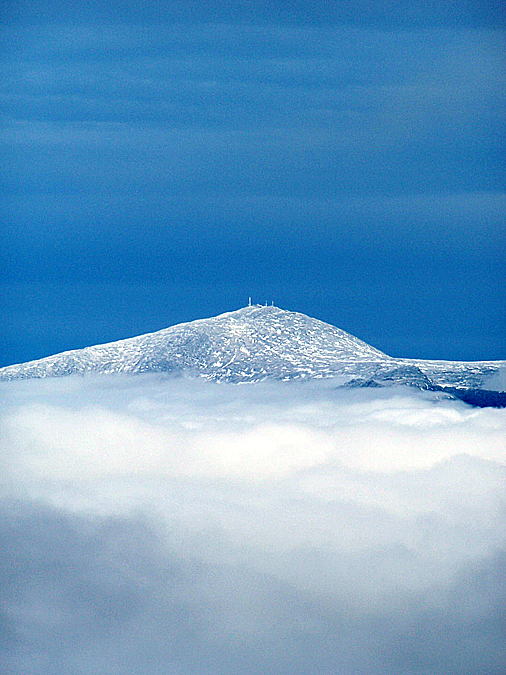 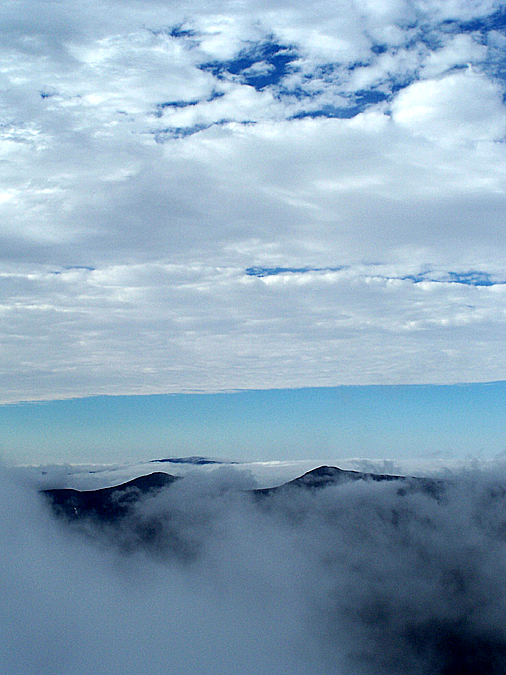 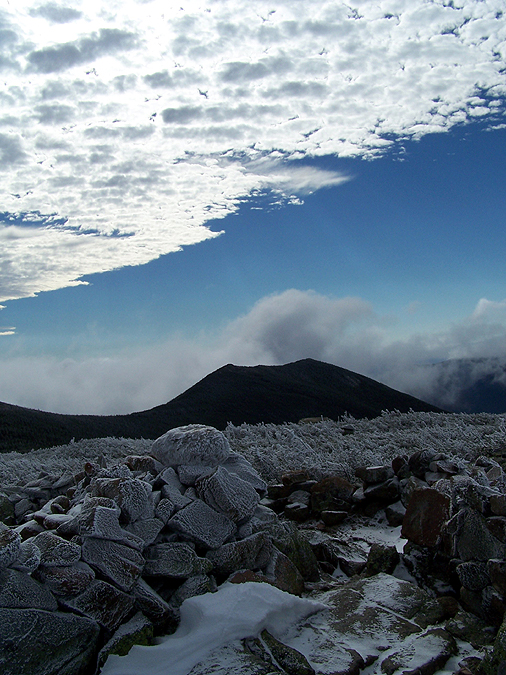 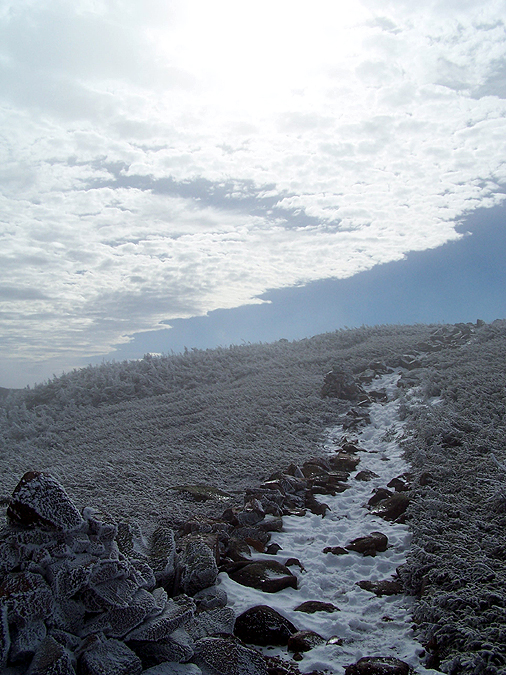