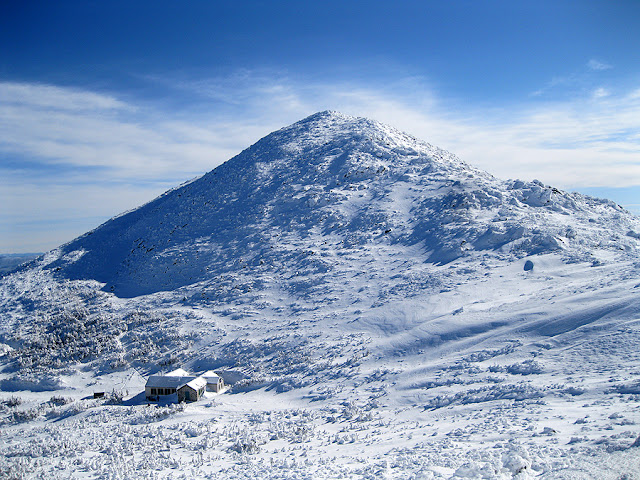 Mount Madison is the northern most mountain in the Presidential Range offering great views into the Madison and Great Gulf Wilderness, south to Mount Washington, North into Maine, and West into Vermont from it's jagged rocky summit.  Madison Springs Hut is located just .5 miles south of the Summit in a col between the summits of Madison and Mount JQ Adams which is a sub peak of Mount Adams.  Weather above treeline on Mount Madison can be just as extreme as Mount Washington so caution should be taken while planning a hike.  Many trails that lead to Mount Madison and Adams can be accessed from the Appalachia Parking Area on Route 2 just a few miles south of the town of Gorham.

-Valley Way: 4.2 miles, 4,100 elevation gain (via Osgood Trail). Located at the Appalachia trailhead is the most direct and easiest route to Madison Springs hut just a half mile below the summit.  The trail doesn't offer many views since it's below treeline until a few hundred feet from the hut.  The trail has moderate grades, only gets slightly steep in a few short bursts, and has the best footing of any trails ascending the northern presidentials.  Once to the hut take the Osgood Trail (located just before and behind the hut) a half mile to the summit.  The Osgood Trail is above treeline, ascends steeply strait up at first then bends up and around the summit ridge until making it's way to the narrow summit of Mount Madison.

-Watson Path: 4.1 miles, 4,100 elevation gain (via Valley Way and The Brookside). The Watson Path affords great views while hiking above treeline to the Mount Madison's summit.  Above treeline the trails is very rough, steep, doesn't have the best footing, and usually is in direct line of the north/north westerly winds.  In bad weather conditions it is not recomended to ascend Mount Madison by using Watson Path as it can be very dangerous.  One should seriously take note of the yellow sign just before reaching treeline ***The area ahead has the worst weather in America. Many have died there from exposure even in the summer. Turn back now if the weather is bad***

-Howker Ridge Trail: 4.5 miles, 4,450 elevation gain (via Osgood Trail) This trailhead can be found on Dolly Copp Road at the Randolph East parking area.  This trail can also be accessed from Appalacia via Maple Walk and Sylvan Way adding another 1.0 mile to the trip.  The Howker Ridge Trail has decent to rough footing in different parts of the trail, while only moderately steep it does have a few up and downs as it ascends along the ridge and it's four tiny peaks called the "Howks."  The Howker Ridge Trail has some pretty excellent views from higher elevations and is lightly traveled compared to Watson Path and Valley Way.

-Osgood Trail: 5.1 miles to Madison Summit, 5.6 miles to Madison Springs Hut, 4,050 elevation gain (via Great Gulf Trail) The Osgood Trail is part of the Appalachain Trail from the Osgood Cutoff to it's terminus at the Madison Spring Hut.  The trail is well blazed and maintained the whole way and has moderate to steep grades with some rough footing.  The Osgood Trail runs above treeline for the last 1.7 miles and caution should be taken if weather conditions are bad as high winds pounds the exposed trail.

April 19th, 2015:  Up Airline, down Gulfside, up Osgood Trail, down Watson Path and Valley Way

September 10th, 2011: Up Great Gulf and Six Husbands Trail to Jefferson, across Gulfside Trail, up Osgood Trail over summit of Madison and back down and out via Great Gulf Trail

May 30th, 2010: Up Great Gulf and Six Husbands Trail to Jefferson, across Gulfside Trail to Adams, down Star Lake Trail, Osgood Trail over summit of Madison and back down and out via Great Gulf Trail

March 27th, 2010: Up Valley Way, up and down Madison via Osgood Trail, up and down Adams via Airline & Lowe's Path, across Gulfside Trail, up Jefferson Loop Trail and back

September 19th, 2009: Up Castle Trail, across Gulfside Trail, to Madison Summit via Star Lake Trail and up Osgood Trail, down Howker Ridge Trail