Cold but Comfortable on Owl's Head

Trip Report:
- Owl's Head gets a bad rep by most peak-baggers, which is unfortunate because there is a lot of history that surrounds the lovable lump located in the heart of the Pemigewasset Wilderness.  I always try and hike up or around Owl's Head at least once a year, however, I had yet to venture up to the summit this year so on Saturday I decided it was time to squeeze in a hike of Owlie before year's end.
- I started hiking at 7:30AM and would not see anyone else until almost five hours and eleven miles later, well on my way back to the trailhead.
- Once the snow blankets the mountains, Owl Head is mostly hiked by using two bushwhacks, Black Pond and Brutus.  While I prefer the snow-free trail approach, the Black Pond Bushwhack avoids two major water crossings on the Lincoln Brook Trail, which makes it a safe hike during the winter months.  The Brutus Bushwhack avoids the Owl's Head Slide, and like the Black Pond whack, the Brutus is a much safer approach.
- It was a cold hike over seven miles to the base of Owl's Head, temperatures were in low teens for most of my hike, but it was easy to stay warm since there was no wind until reaching 3,000 feet and even then it was easy to deal with.
- The trails and bushwhacks were all broken out which made my day very easy, the only place where there was any drifting was between the old summit and the new summit and it was only a few hundred feet of it.
- I enjoyed the hike along Lincoln Brook very much on this quiet Saturday, and then loved the steep burst up to the ridge about a quarter mile south of the official summit.  It's not often now-a-days to hike a 4,000 footer with no other hikers around on a weekend, but I had the mountain all to myself and was very grateful for this.
- Up on the summit the temps were in the single digits so I did not stick around long.  After snapping a picture, I turned around and made my way back down taking more pictures along the way.  Once back on the old railroad grade of the Lincoln Brook Trail I made good time back to the Black Pond Bushwhack, finally seeing two other hikers about a mile before the whack.
- Once on the Black Pond Bushwhack and Black Pond Trail, I didn't see any hikers again making for a nice hike back to a tourist trail, the Lincoln Woods Trail.  Over the last two miles back to the car I saw some hikers, a couple of cross country skiers, and a few people in jeans who looked very cold and not too happy!
- Once back at the car I changed into comfortable clothes and drove back north to Gorham, making it home in time to see Whitney before she left for work and spent the rest of the day and night relaxing with Sarge! :) 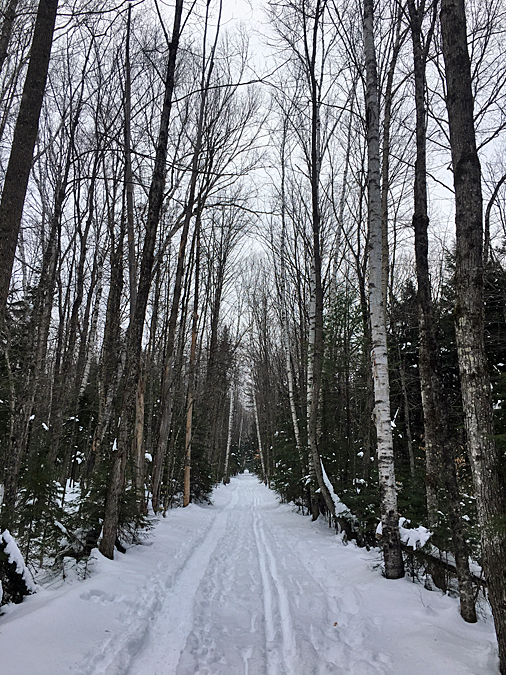 Hiking along the Lincoln Woods Trail 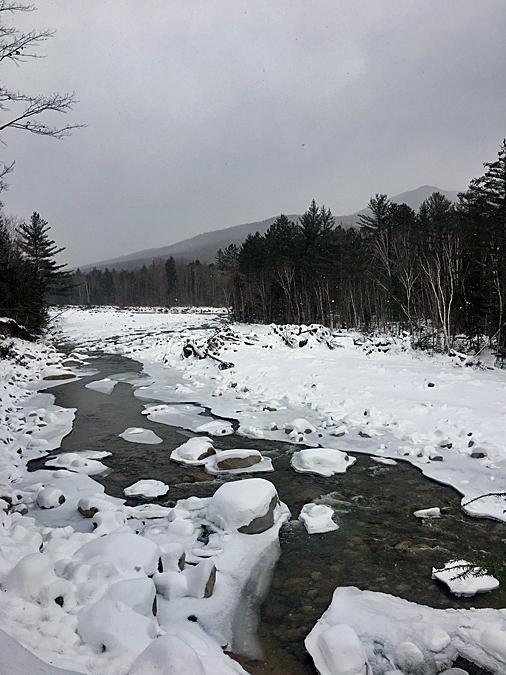 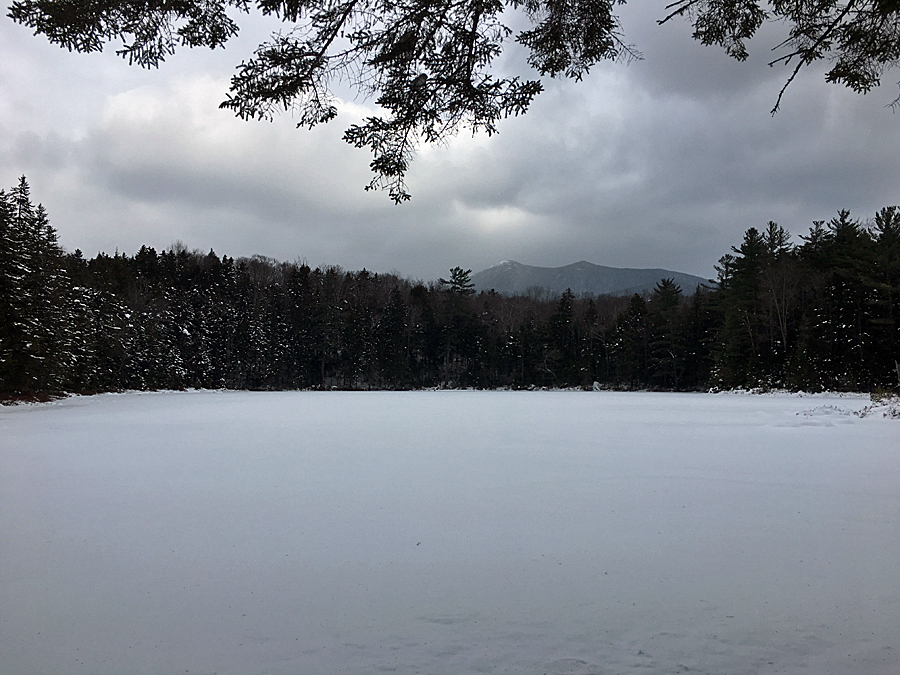 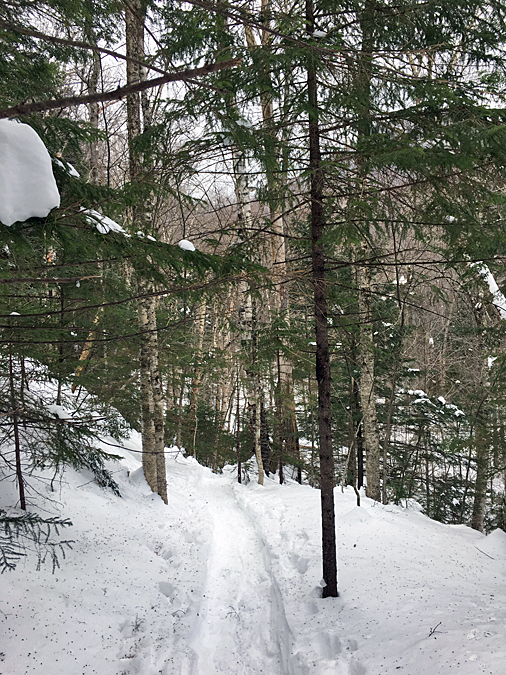 Black Pond Bushwhack, this part is over a well defined old logging skidder road, near the Lincoln Brook Trail 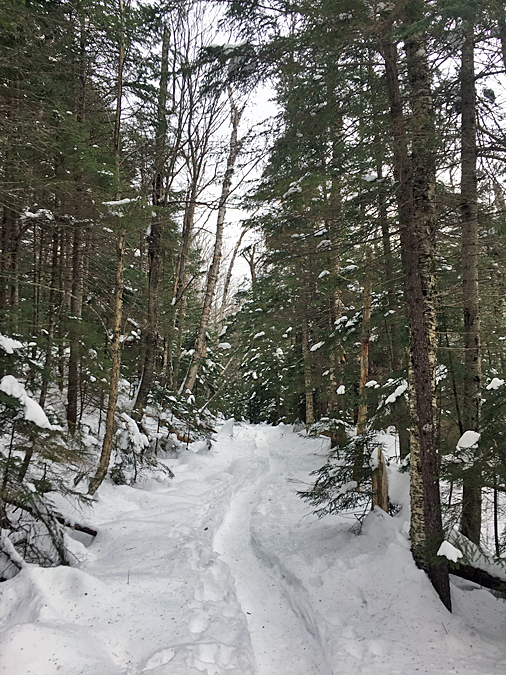 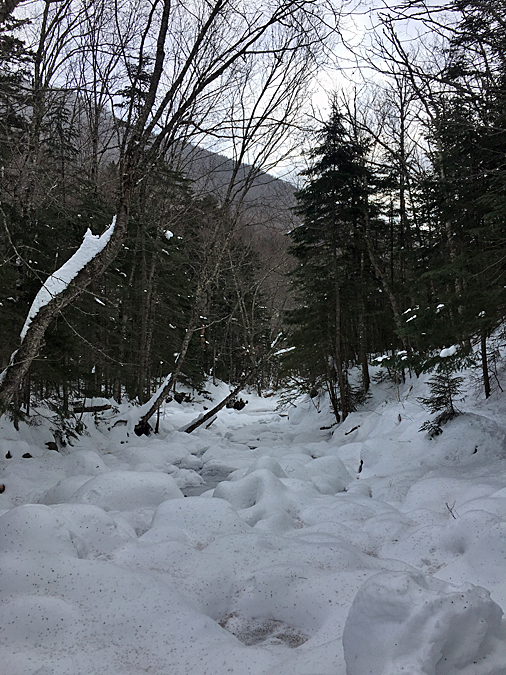 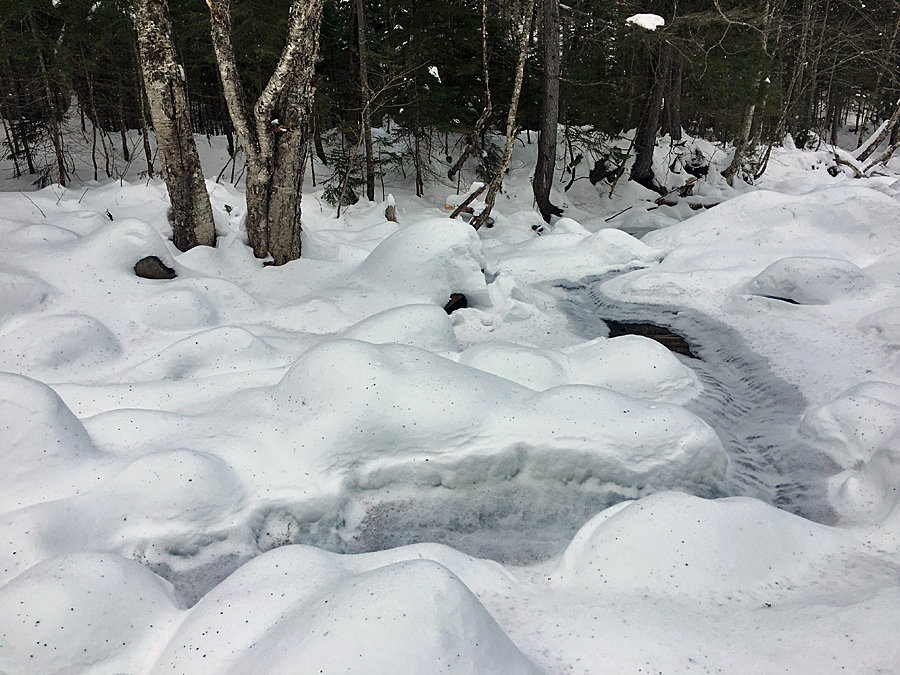 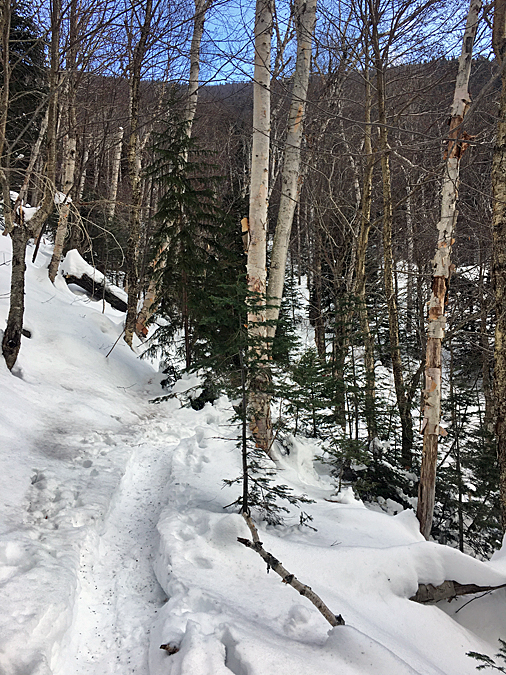 Brutus Bushwhack, the first few tenths of a mile travel along this old logging skidder road 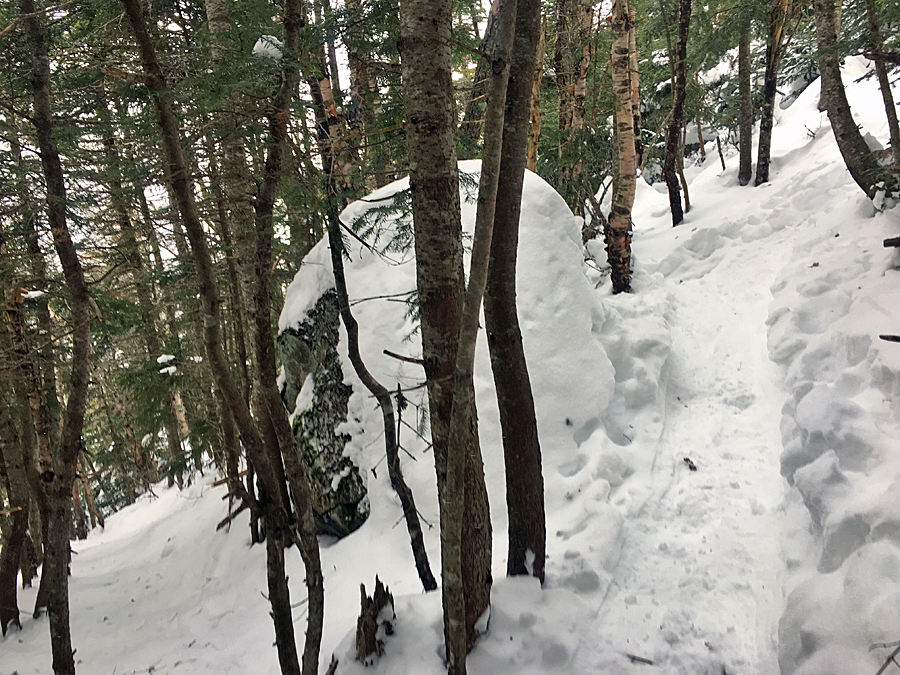 "Brutus Rock" The end of the bushwhack comes out at this rock where it joins the Owl's Head Path, heading up and to the right.  You also can see where the trail heads downhill to the left in the picture, over unbroken snow 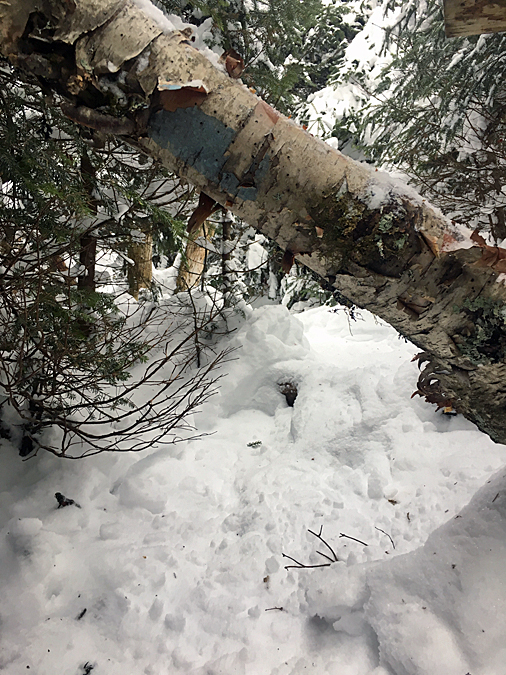 Very rare blaze on Owl's Head Path, not too many of these left. 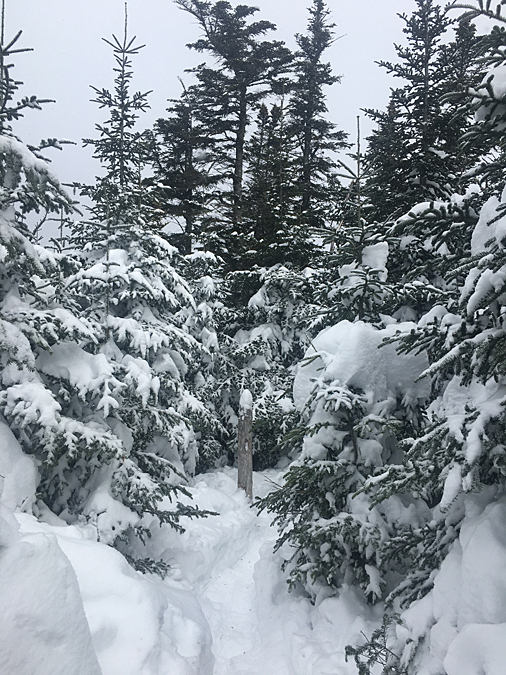 On top of the ridge making my way to the summit.  Winter wonderland! 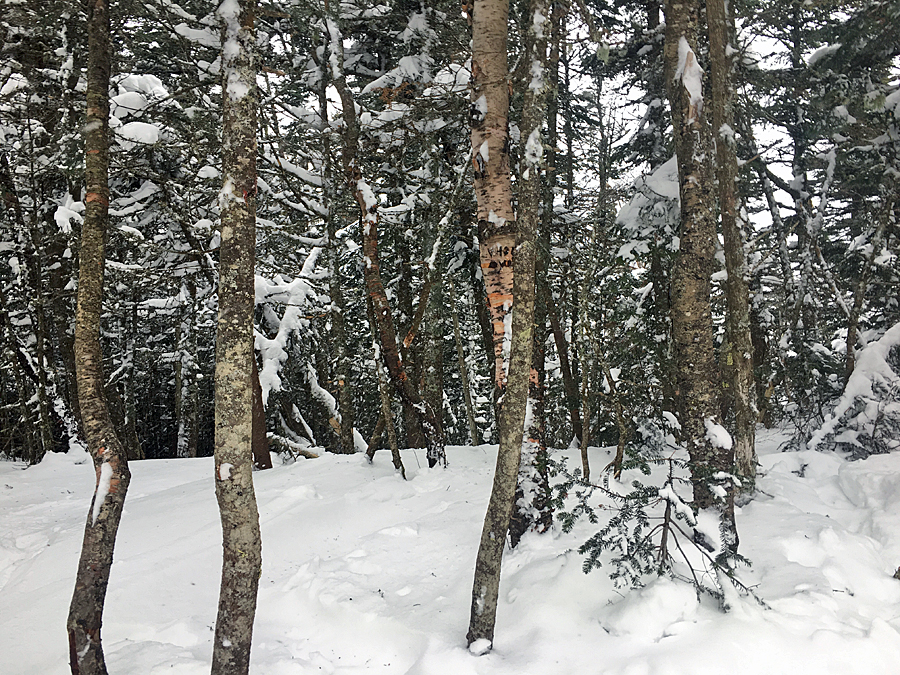 The summit of Owlie, not too exciting! 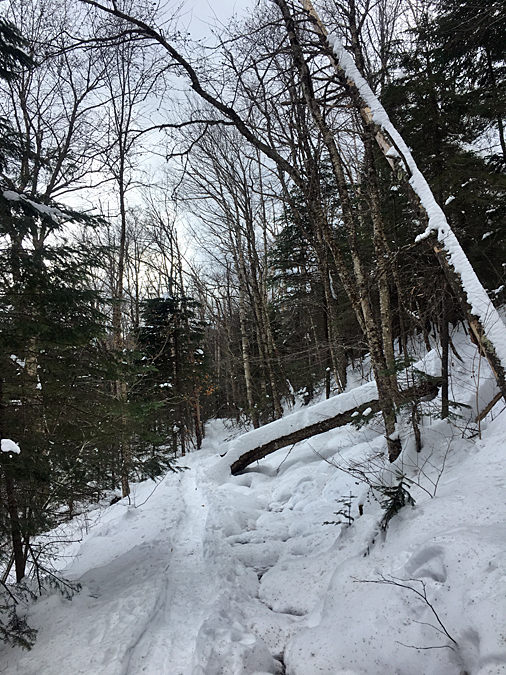 Hiking back out along the Lincoln Brook Trail, actually this is over a short abandoned stretch, the actually trail is above twenty feet up to the right.

Three way junction.  To the left, the Lincoln Brook Trail heads to the brook and crosses it.  To the right is the Black Pond Bushwhack.  And not broken out is the Fisherman's Path, another bushwhack which would head just right of center in this pic and parallel the brook coming out at Franconia Falls Trail. 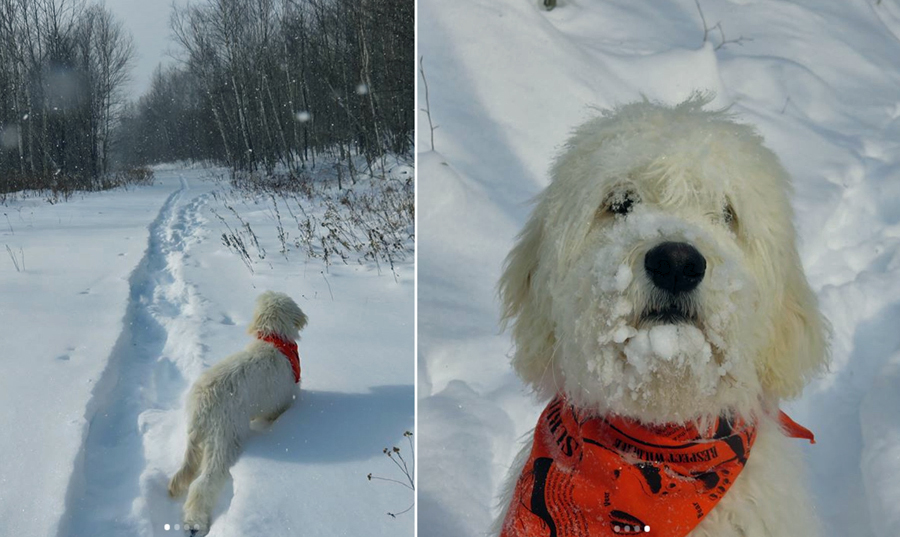 Sarge spent the day with Whitney, he loves the snow, he's a snow monster! :)
Posted by Chris Dailey at 8:15 PM