Calm Before The Storm . . . Isolation

Trip Report:
- December is already off to a much better start hiking wise than just a year ago, and with a storm on the way over Sunday night through Monday afternoon conditions will be outstanding for snowshoe hiking throughout the 4,000 footers of the White Mountains.  Basically, come Tuesday morning it'll be time for some tough/fun trail breaking, something that was sorely missed last winter.
- Before the storm came in I drove through Pinkham Notch to get a morning hike into the Engine Hill Birch glades.  My original plan was to just roam around and explore the glades and turn around, but when I reached the split for the glade whack there was a nice track already laid out so I decided to follow that for awhile.
-  Last April I ventured through the glades doing a little exploring and was hoping to go a little higher this time to see if there were more glades.  Luckily enough, the tracks I was following went higher than my April route and before long I ran into a nice group of six who were leading the way.  After talking to them for a moment the group continued on and  I cut through the woods but unfortunately there were no extra glades to be found.  When I reached a drainage I descended to a glade I was familiar with and angled my way down to the Isolation Trail.  The whack portion of the hike had the best snow conditions of the day and made for a nice snowshoe hike.
-  Once back on the trail it is a pretty easy two-and-a-halfish miles to the summit.  The trail never gets steep so it's not too much of a grind.  However, there still was not enough snow to submerge all parts of the trail and I was punching through some frozen mud and water spots before and after the last water crossing of the Rocky Branch, my trail running snowshoes took a beating until getting above 3,500 feet.
-  The last mile is along the Davis Path and there was plenty of snow up there and I was able to get back into a nice grove all the way to the summit where I had some decent views, albeit Washington was socked in.  I could definitely tell a storm was slowly making its way over the mountains so after taking a few pictures I scooted my way back down Davis Path and Isolation Trail.  I ran into the group again just past the primitive tentsite a few tenths of a mile below Davis Path and briefly chatted with Steve 'Spot' and John "C', nice to see you and your group out there.
- When I jumped on the Engine Hill Bushwhack I veered off my previous tracks at the drainage and stayed on a more familiar line for a couple tenths of a mile with the intention of dropping to a lower glade following it until intersecting the previous track about a quarter mile from the Rocky Branch Trail.  However, I misfired and angled just a bit higher and missed the start of those glades (see image below to see what I was aiming for).  Once I knew I missed my entry point I angled back uphill and hooked onto the groups tracks a half mile from the Rocky Branch Trail.
- From here I motored back to the trail and descended to the Rocky Branch parking lot making it out around 1:45PM and home by 2PM.
- Now bring on the snow :) 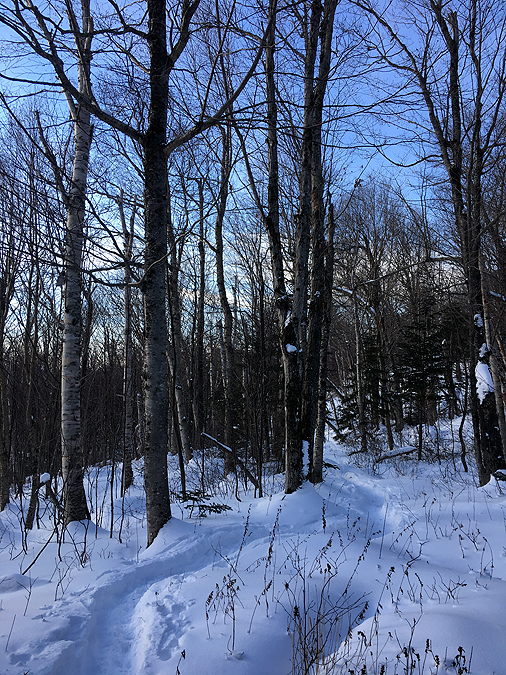 After a steady two mile climb the Rocky Branch Trail pops out along the shoulder of a hill.  From here the trail has gentle rolling grades for the next mile to the Engine Hill Bushwhack split 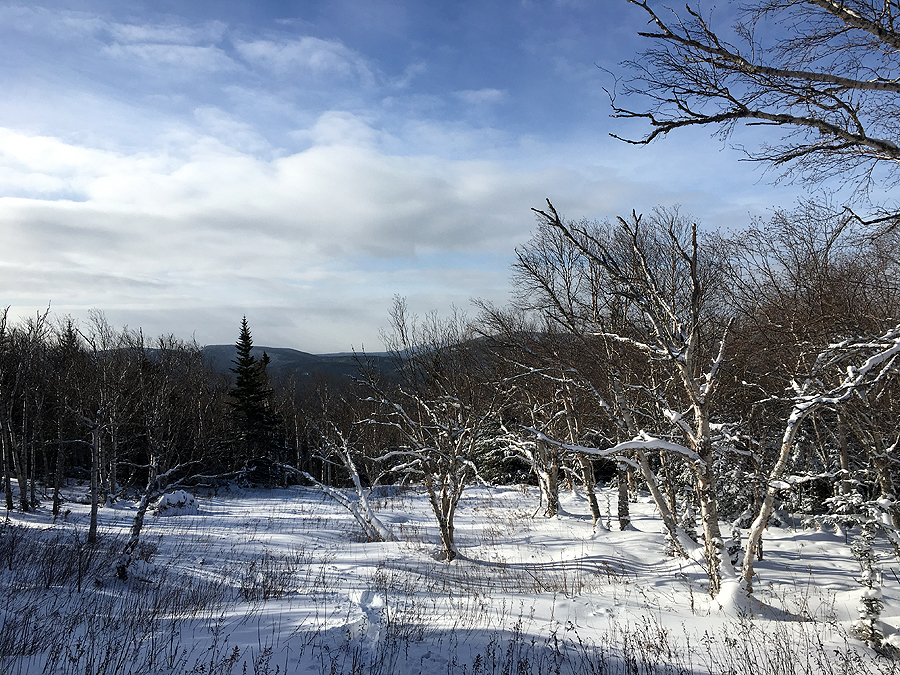 Heading through the whack portion of the hike.  After tomorrow's storm the remaining underbrush will be completely buried making this spot even more beautiful 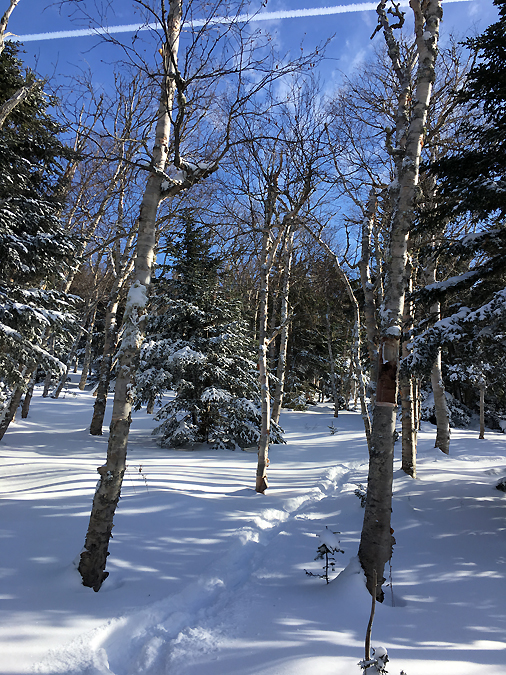 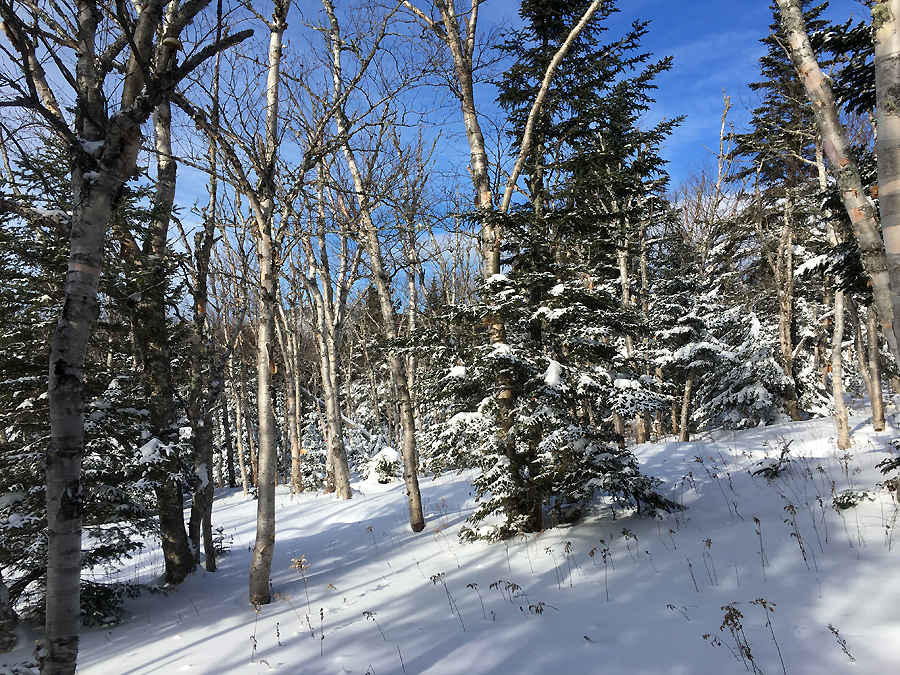 Making my way through the glades 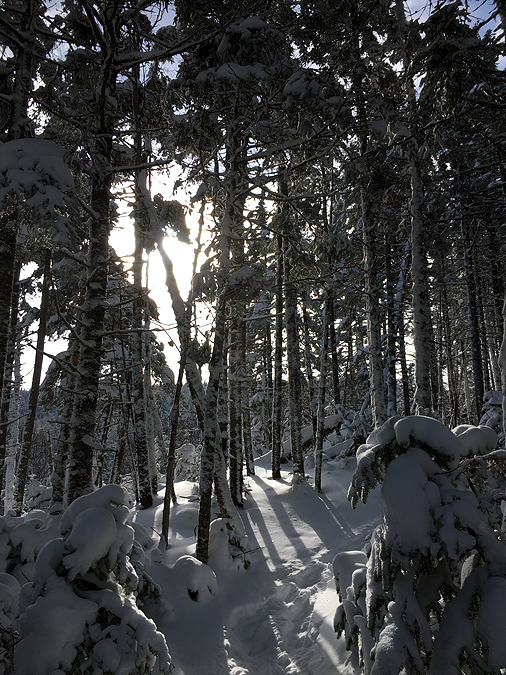 Heading up the Isolation Trail (East) 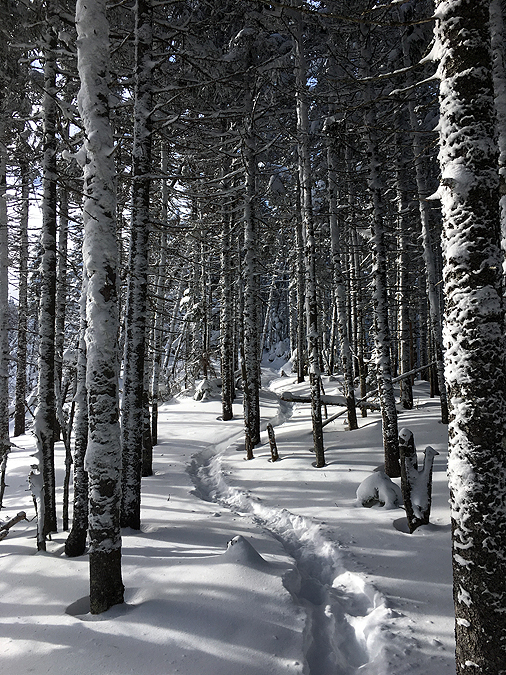 Always love this little spot, it's right before the primitive tentsite, the pine is always blasted with windswept snow 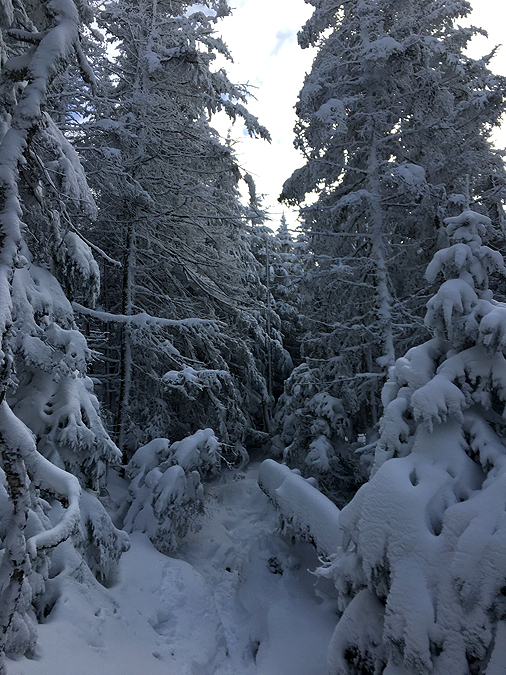 Rolling along the Davis Path 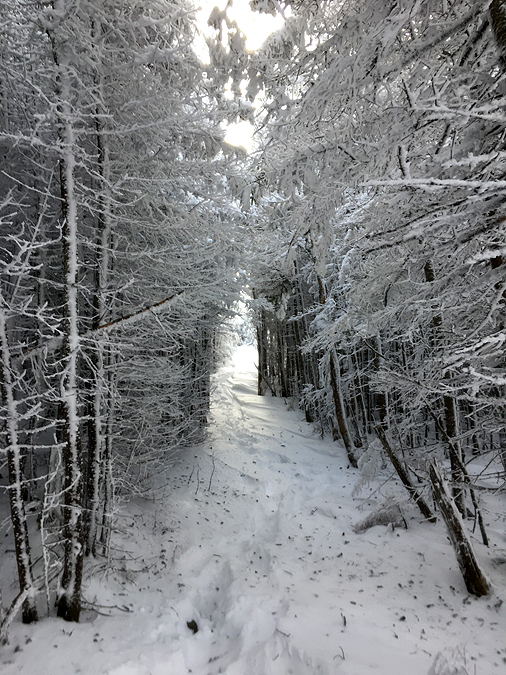 This spot always gets drifted in, luckily it's very short! 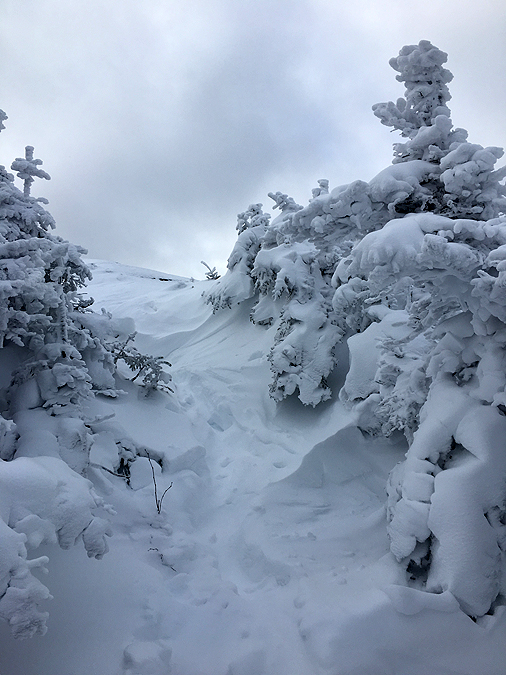 Making my way to the summit 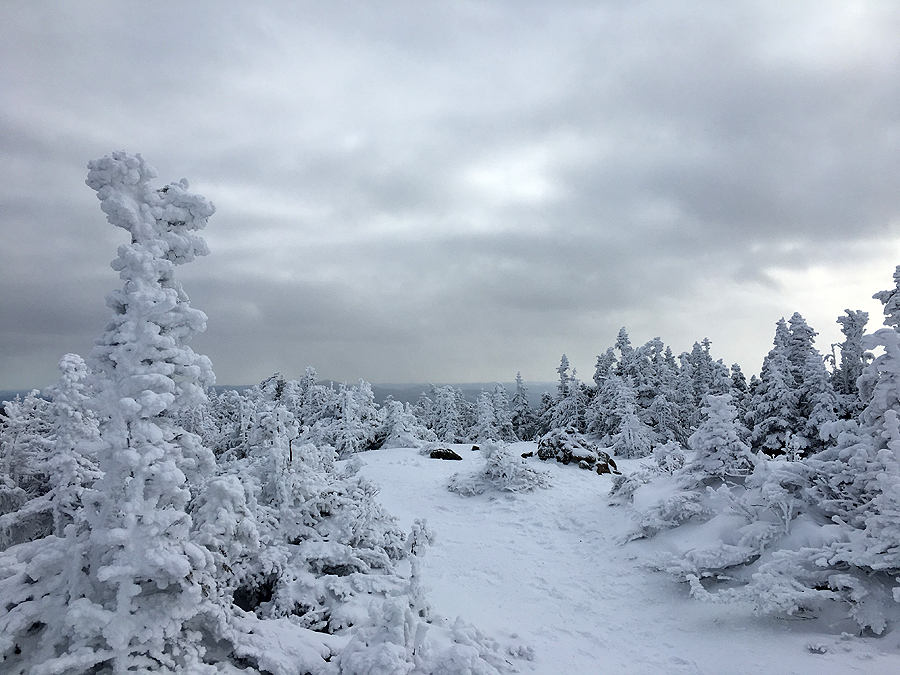 What a view!  Pano of Eisenhower through Bootty Spur 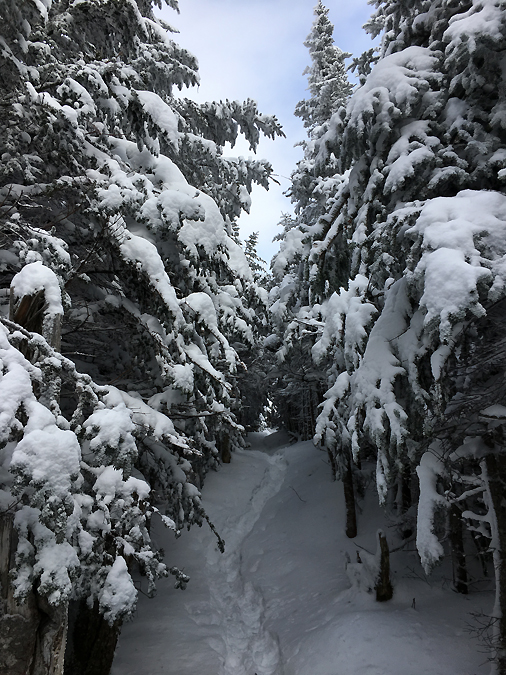 Heading back down the Davis Path 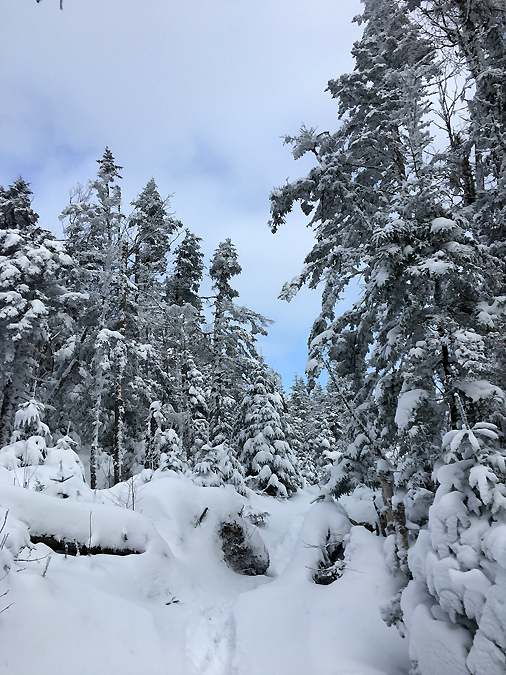 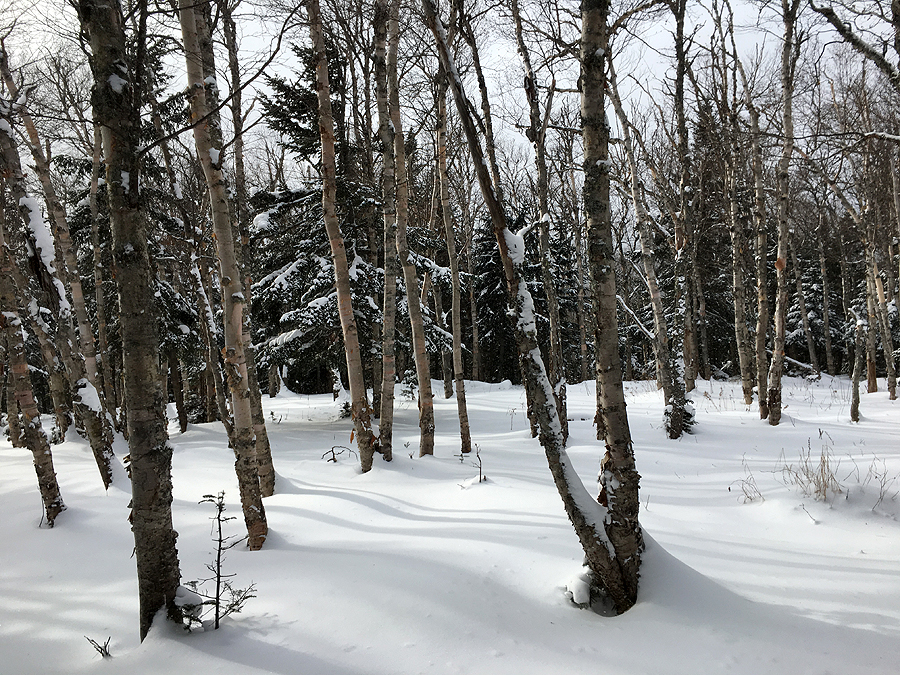 Unbroken glades.  It's a lot of fun to wander through here :) 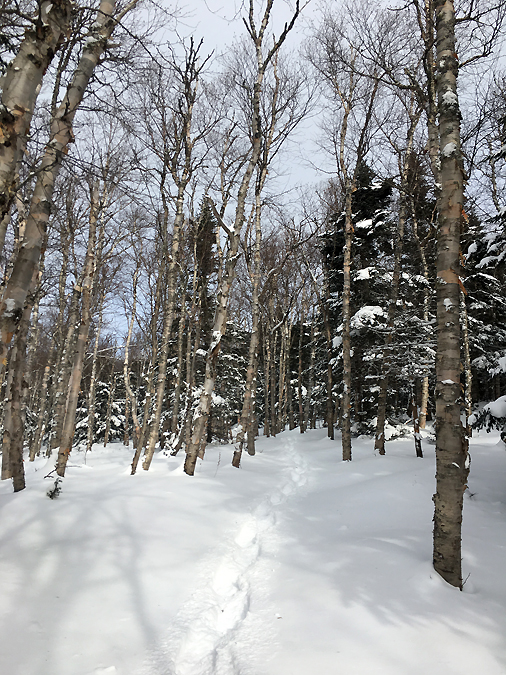 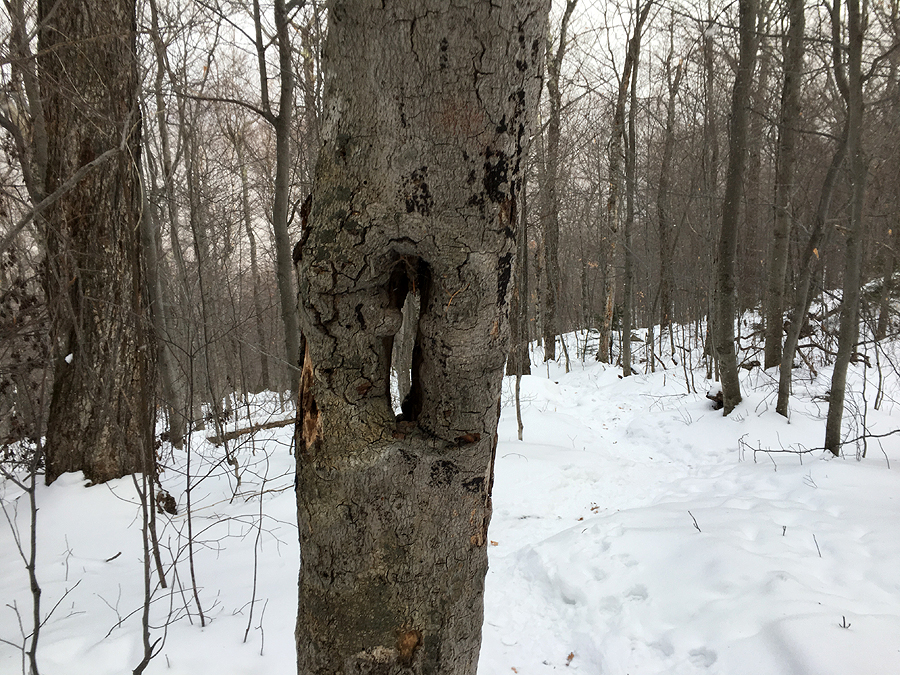 On the way out I spot this unique tree which I had never noticed before. 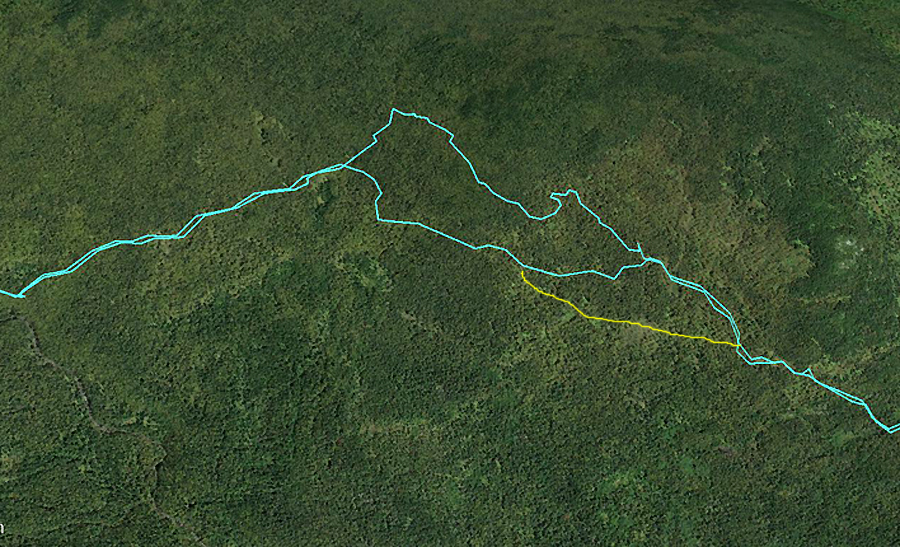 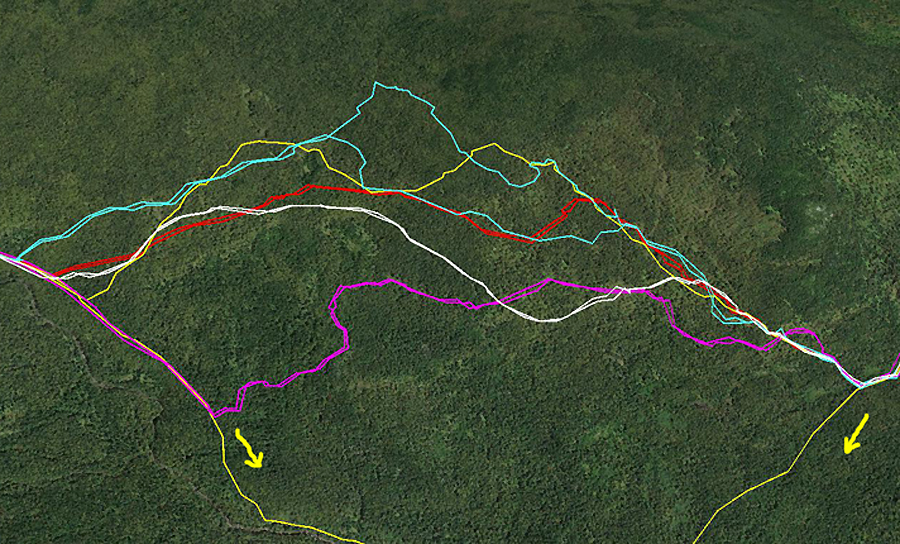 Now it's time for some fun!  The yellow route is from April, on the way out I stayed to the trail, notice how out of the way it goes...all the way off screen!  The purple route is a route Whitney and I followed in 2015, not one of my favorites, went low too fast and missed some kick ass glades.  The White and Red are two of my more favorite lines and both hit some nice glades.  Blue route was from today, notice it went higher, just where I wanted to go but no extra glades up there. 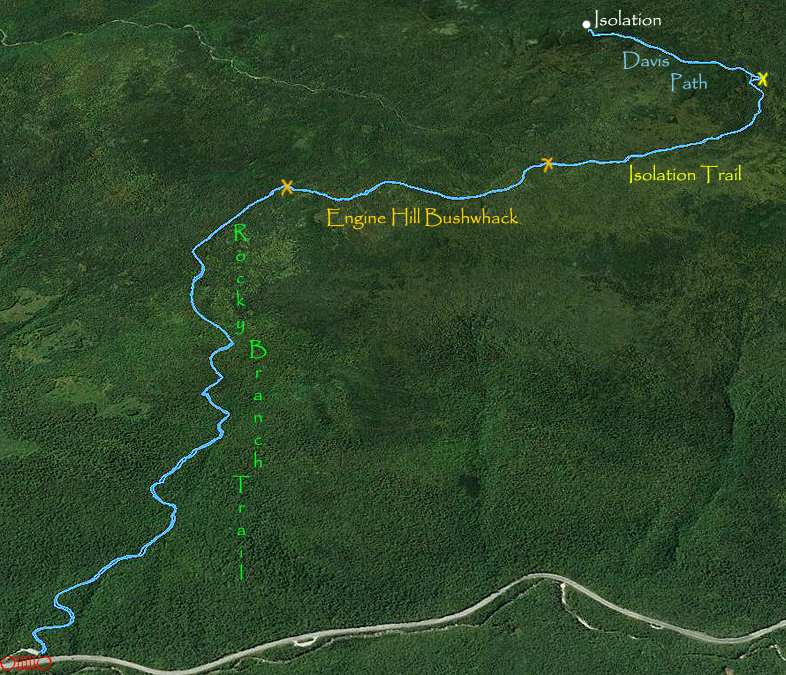 Map of a route (Jan. 2016) to show perspective on the trail and whack parts
Posted by Chris Dailey at 4:11 PM