Trip Report
-  On Saturday morning I wanted to hike, but with a quick moving snowstorm coming through I didn't want to drive far after finishing my hike, so I drove five miles down the road to the Nineteen-Mile Brook Trailhead to do a little snowshoeing.
- My original plan was to head up to Carter Notch Hut or Zeta Pass depending on the conditions.  I was looking to break trail and wanted to get in a good workout.  However, the Nineteen-Mile Brook Trail was average at best with a lot of rocks still hiding under the snow making for that awful grinding noise against the snowshoes.  It was pretty quiet on the trail as I saw two guys at the parking lot and then a group of eight about a half mile in.
- Once I reached the Carter Dome Trail junction I hooked onto the Carter Dome Trail where trail conditions got instantly better, the rocks hiding under the snow became few and far between and by the time I reached the main water crossing and the seven switchbacks it was good trail breaking, just what I was looking for!
- The Carter Dome Trail is a rarity in the White Mountains for a trail that ascends to a 4,000 footer, it has numerous switchbacks, seven of them!  It's not too thrilling most months of the year to hike it, but once the snow blankets the trail it becomes a winter wonderland and a beautiful trail to ascend and break trail.  The snow depths kept increasing as I gained the ridge and the trail breaking was on the easier side as it was through fluffy powder.
- At Zeta Pass I banged a left on the Appalachian Trail (north), I still wanted a little more of a work out so I headed to South Carter's summit which is just under a mile away.  The grade from Zeta Pass to South Carter summit is easy to moderate which made the solo trail breaking enjoyable.  Snow depths where between eight and twelve inches with higher wind drifted spots.
- The wind started howling the higher I went but with the pines all blanketed in snow I was protected from the worst blasts for the most part.  By the time I reached the summit just after 10AM the snowstorm picked up in intensity and made for a fun hike back down to Zeta Pass.
- Right before reaching Zeta Pass I bumped into the two guys I saw at the parking lot, about ten minutes later I saw the hiking group, and then further down the Carter Dome Trail I saw two other pairs of hikers.
- Once back on the Nineteen-Mile Brook Trail I took off my snowshoes and barebooted back to the car so I would not grind up the bottom of my new snowshoes.  Over the summer I picked up the Tubbs Flex VRT, replacing my Tubbs Flex Alp.  I like them just as much as my old Alps, especially the binding, which is easy to use and makes for a snug and secure fit.  I'll still use my old Alps when the conditions are a little bony, and I'll use my Dion trail running snowshoes when everything is packed to the max.
-  After bouncing my way back to the trailhead, I cleaned off the Jeep, froze my fingers up pretty good doing that, and drove up the now snow covered NH 16 back to Gorham, making it home in time for lunch.
- After last year's record low snow and warm temps, it's looking like Winter in the White Mountains is back! 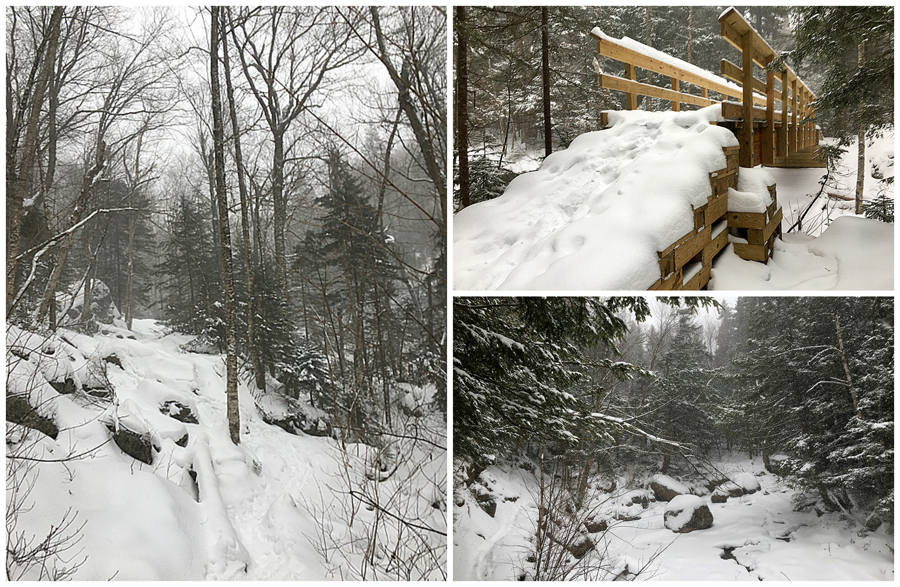 Heading up the Nineteen-Mile Brook Trail.  Another foot of snow and this will be great snowshoeing from here on out! 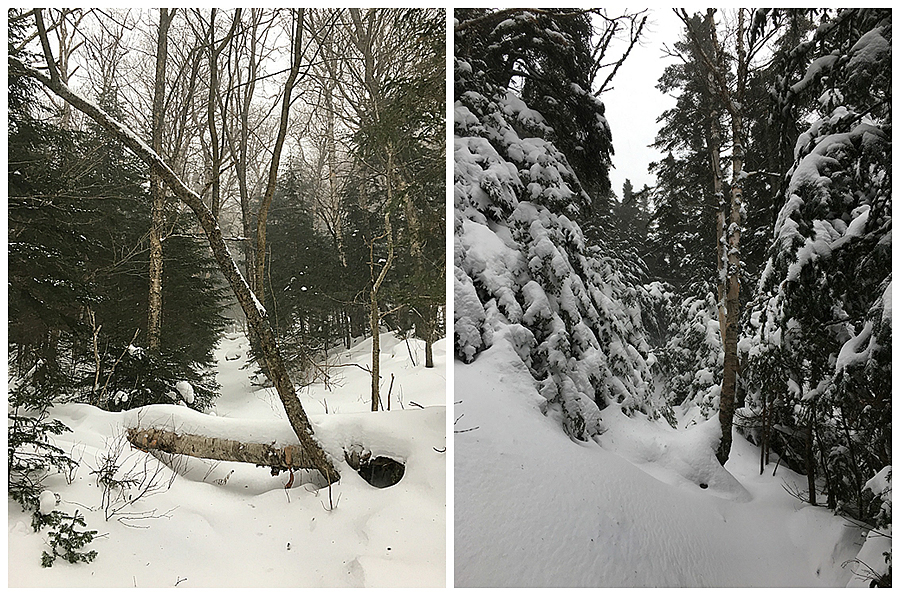 Morning on the Carter Dome Trail.  Early hiker gets to lay tracks! 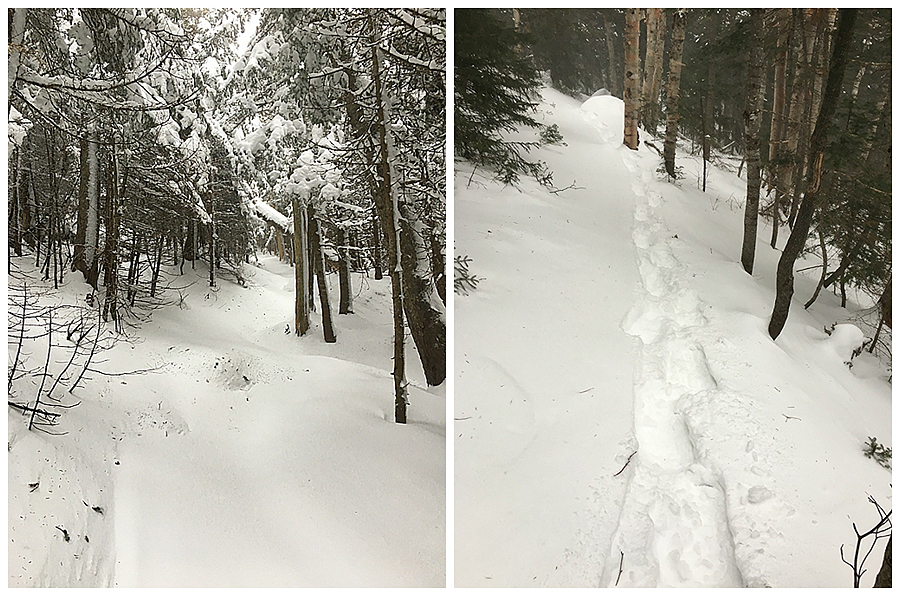 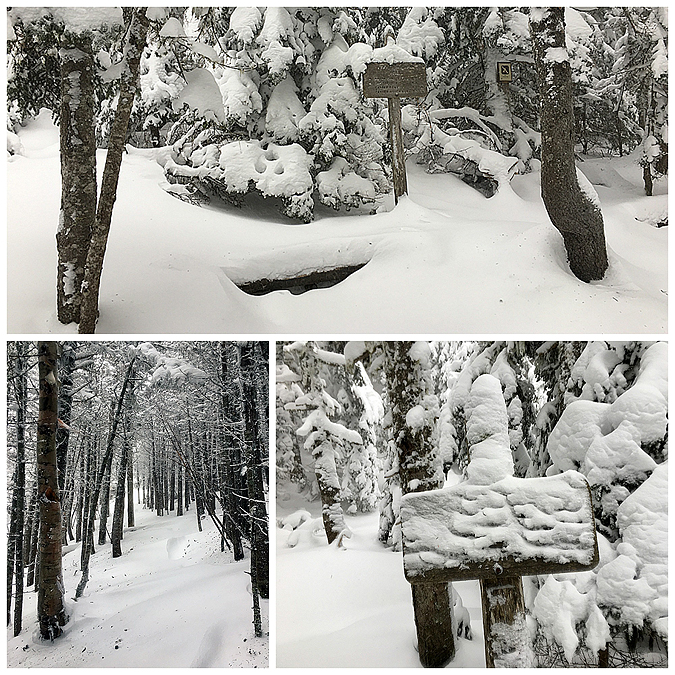 Arriving at Zeta Pass and heading north on the A.T. 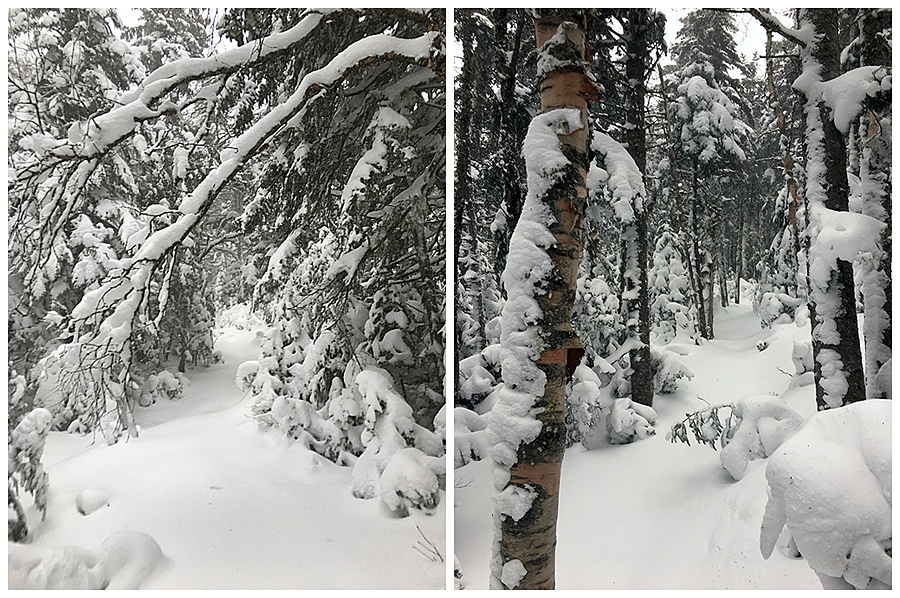 Winter Wonderland on the Appalachian Trail 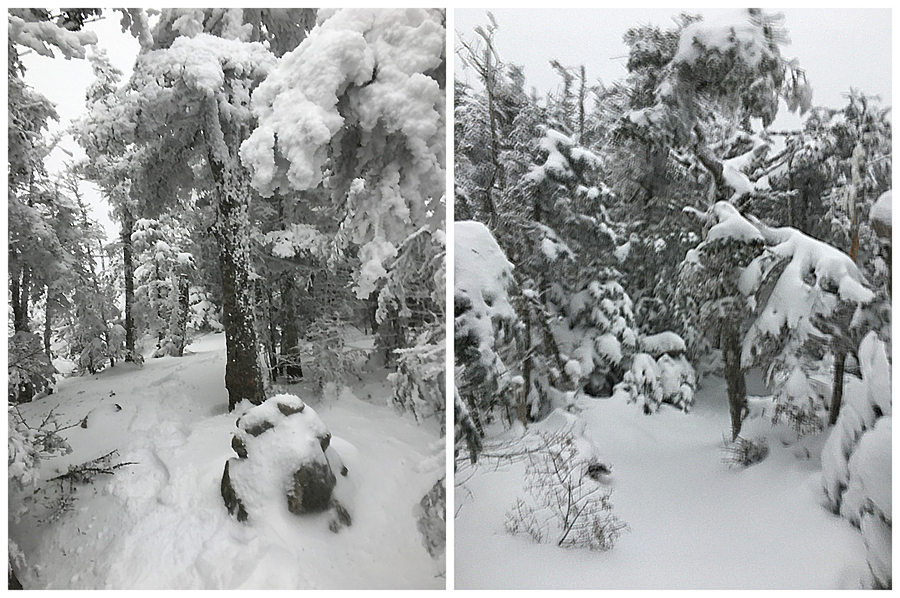 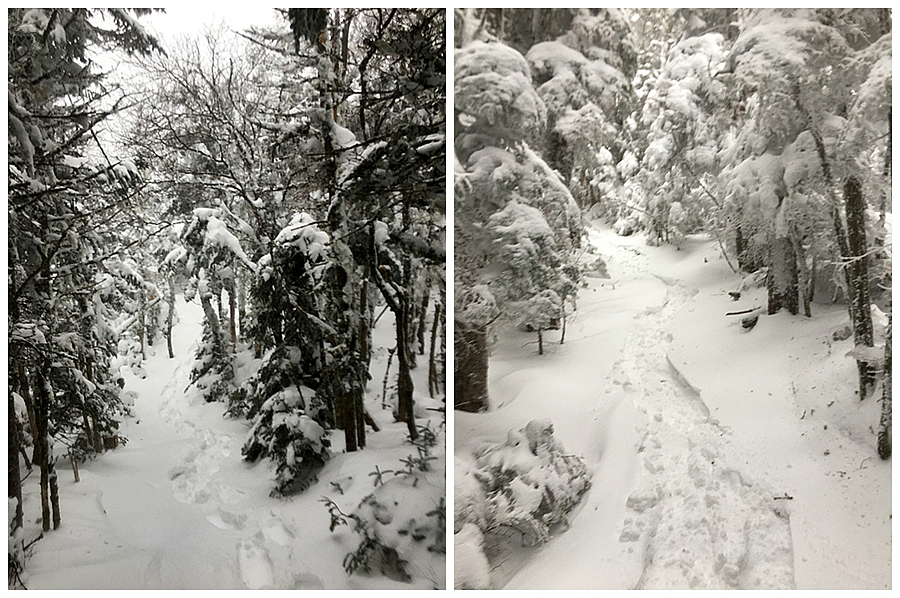 Heading back to Zeta Pass 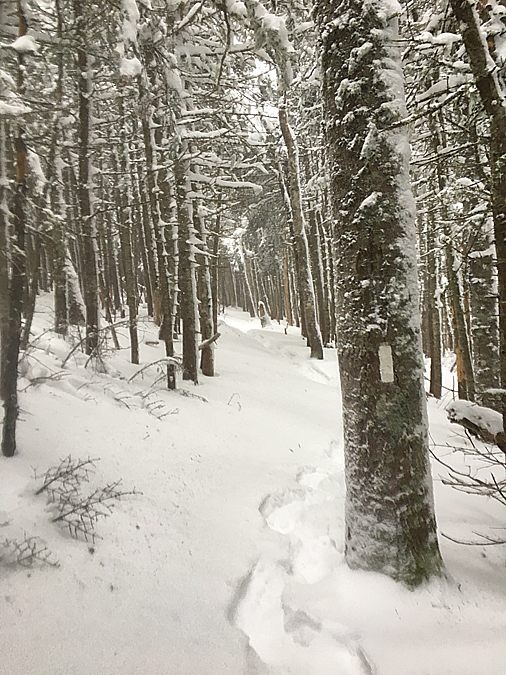 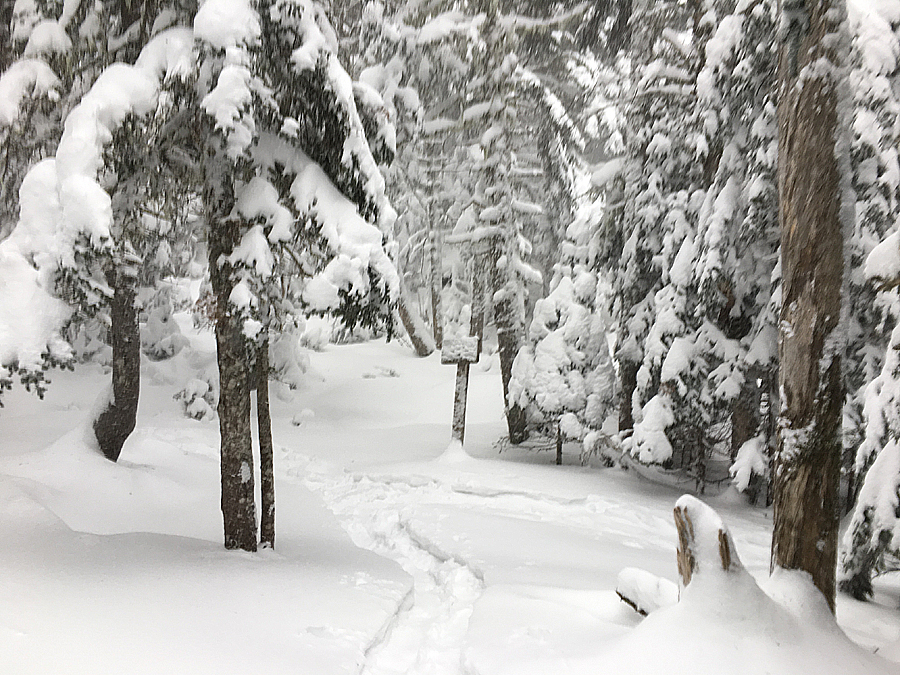 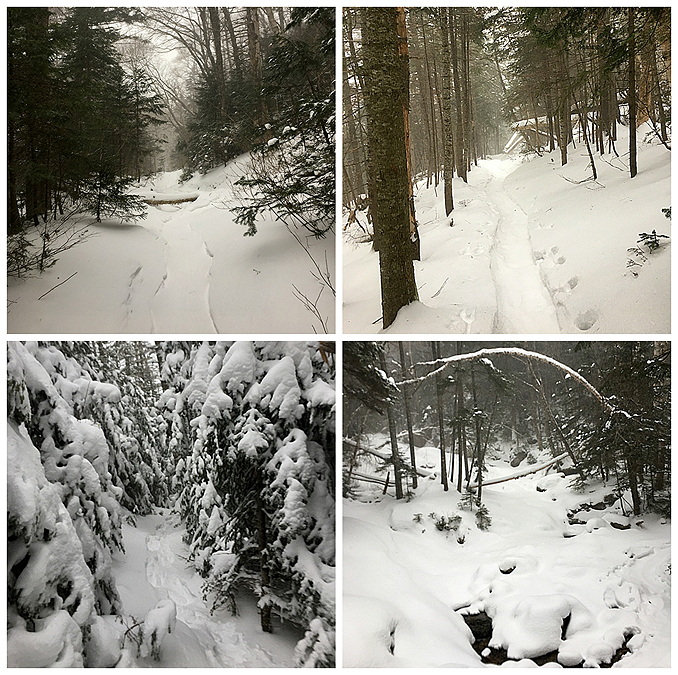 Descending back down the Carter Dome Trail 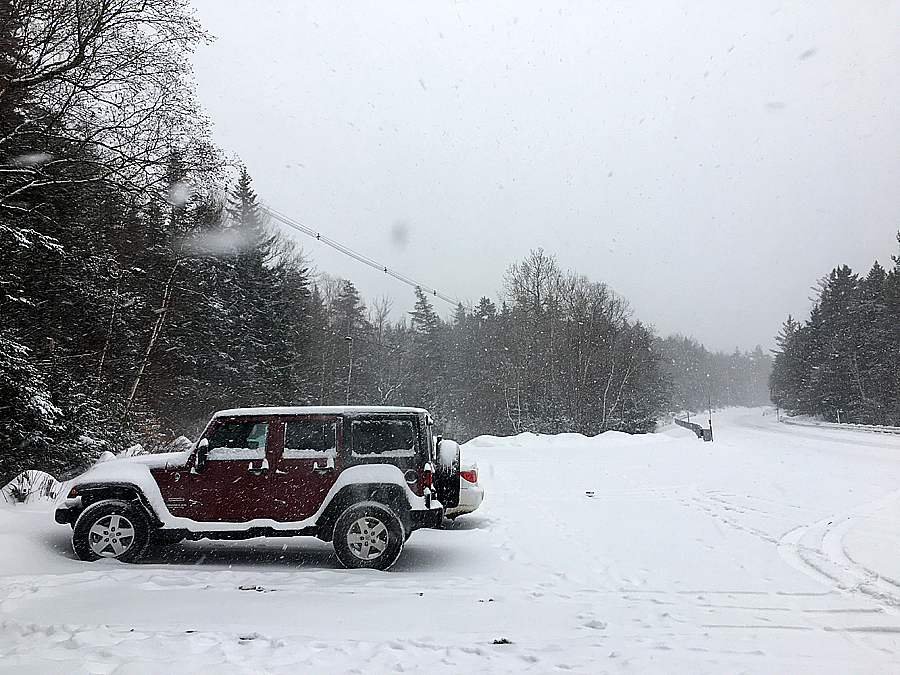