Trip Report:
- With frigid temps forecast for Saturday I thought I'd play it safe and stay below treeline and out of the wind and hike everyone's favorite mountain Owl's Head!
- I was excited to get back to Owl's Head, having only been there once before in the summer and this time I'd get to hike the Black Pond Bushwhack and Brutus "Brutie" Bushwhack (named after a newfie dog! (Click here for more about Brutus) to the summit of "Owlie."
- On Trail at 7:30am, ditched hike 11ish, unditched hike 11:30ish, summited no idea!  Finished 7:15pm. Temps in low single digits maybe even zero or below at 4,000 feet. No wind in the woods lots and lots of new snow.
- The first 2.6 miles along the Lincoln Woods Trail wasn't as smooth as I had hoped for, there was a XC ski track but no snowshoe track, so eventhough I really wanted to walk on the ski tracks I broke some minor snow of about 6 inches or snow in the middle of the trail until I had had enough and walked on the ski tracks for the last few hundred feet to the Black Pond Trail junction.
- Luckily the black Pond Trail and the bushwhack were easy to follow and it was broken out pretty good. The Black Pond Bushwhack was more annoying and went a little higher than I thought it would be but I was happy because it was broken out.
- When I reached the Lincoln Brook Trail things got interesting, within ten minutes the snowshoe tracks came to an abrupt end. Ahead of me lay an unbroken faint trail (except for the moose who post-holed for a half mile). It was very very slow going but I continued along the banks of the Lincoln Brook for a while and crossing it twice over snow-bridges that made for and amazing site hiking across a river six feet above it on snow!
- Once past the last crossing it was time to start the Brutus Bushwhack...this ended badly as wherever I went it was just to steep and the snow was brutal as I kept sliding back and falling up to my waist in drifts. I made it about twenty-five feet up and realized I had no idea where I was supposed to go and that this was a stupid idea.
- Next I went back to the Lincoln Brook Trail and tried to head to the Owl's head Path to try my luck up the slide (another brain-dead idea). I made it about one hundred feet before snow-depths increased to 3 feet and I decided I had to turn around and go home.
- I started hiking back out for a half hour or so and I kept looking up at the bright "Bluebird" skies and started cursing myself..."Look up at the blue sky, what the hell were you thinking? Who the hell hikes this stupid no-views mountain when you have a clear 100 miles of visibility, I don't care how cold it is you could have hiked up Garfield or Jackson in no time and got kick ass views BUT NO you're here freezing your ass off in the middle of nowhere...way to go IDIOT!"...I could also hear my dad saying "You're a sh!thead"
- So I was bummed out beaten up and pretty upset when out of nowhere a miracle in the form of eight strong hikers came heading my way to salvage the day!  Among them were Bob & Gerri who I had hiked with this past summer! So to the end of the line I went and joined in with them to knock off Owl's Head no matter how exhausted I was.
- With nine people packing down the trail to the Brutus Bushwhack it made things much smoother until it was time to head up the steep western slopes off Owl's Head. Eventhough there were nine of us it still was a slog to break trail up to the top and I was in rough shape from my earlier hiking but I was warm so I knew I could make it.
- Two other hikers caught up to us and we now had eleven breaking trail as we gained the ridge and made our way past the old summit and over to the new summit. We stoped to refuel and warm up for a couple of minutes, I put on some dry clothes but froze my fingers up worse than I ever had before.
- Luckily about twenty minutes into our descent I was in the clear and knew my fingers would be fine, but what a strange and unpleasant feeling especially in my pinky's, it felt as if they weren't there for ten minutes!
- The hike back down to the Lincoln Brook Trail was fast as we all slipped and slided our way back down taking some gnarly falls in the snow enjoying the quick descent.
- We ran into one of the friendliest dogs ever (Thor) who was running up and down the trail and jumping into snow drifts and having a blast!
- Once back on the Lincoln Brook Trail it was time to start the long hike out over pretty boring terrain, night was quickly falling upon us as we donned headlamps for the Black Pond Bushwhack and the Black Pond Trail, the mile along the Black Pond Trail was the worst stretch for me, I had just had it and was out of gas.
- Now came time for the 2.6 miles Lincoln WoodsTrail sufferfest. It was the same as it ever was but the good news is when you're with eight others sharing in the misery it makes it go a little better and faster!
- Back at the car I changed out of my frozen clothes and started the long drive back to RI finally warming up 100% when I hit Boston!
- It was such a wild day and I was thankful that I ran into everyone when I did, they saved the day for me and made this a hike I'll never forget, thanks everyone! 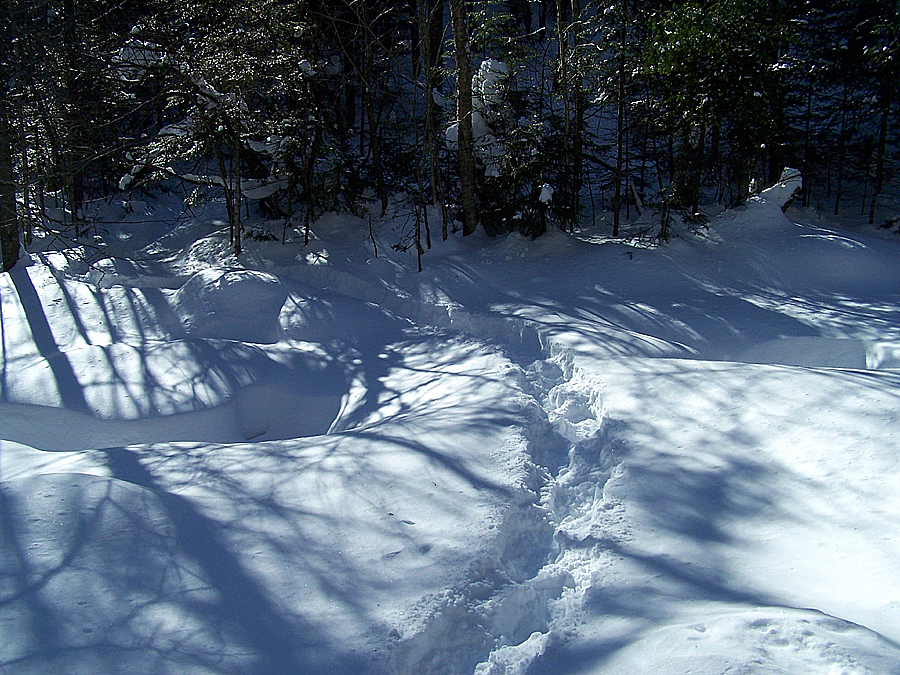 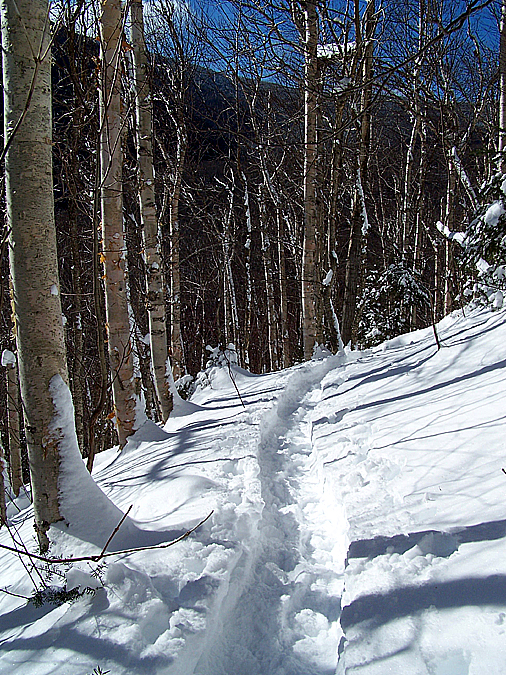 Breaking out the Brutus Bushwhack 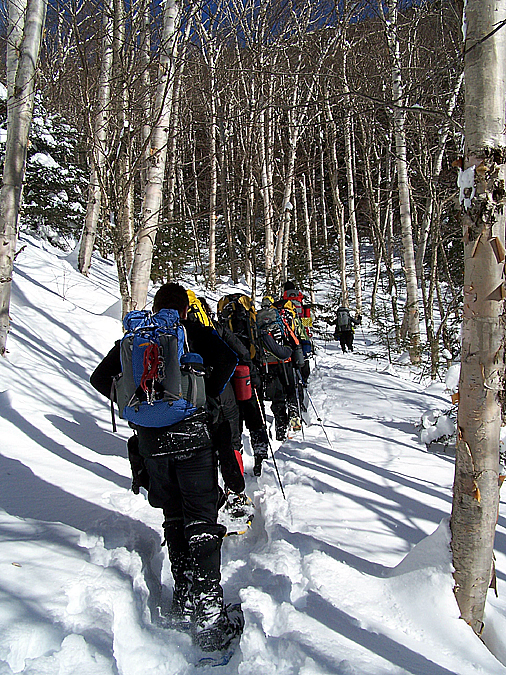 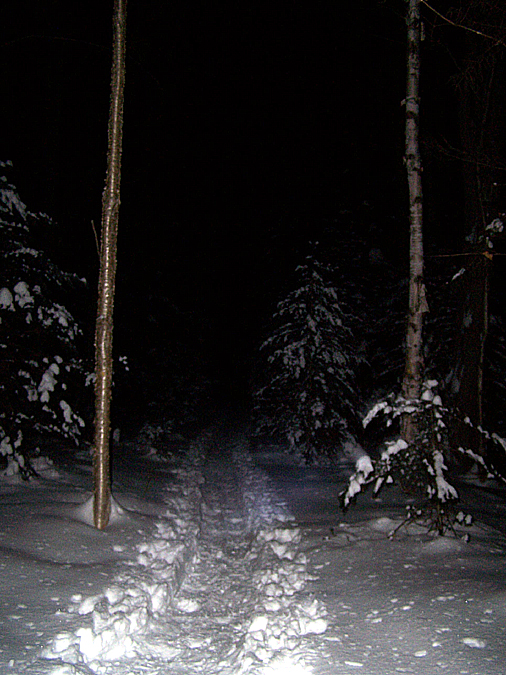