Trip Report:
- Every four season hiker was especially happy this Thanksgiving as a storm dumped up to and over a foot of the white stuff on Wednesday in the White Mountain.  Initially, I was hoping to break out the Bonds, but the weather called for in the clouds, and if I was going to break trail to the Bonds I wanted views.  Luckily, my friends Kyle and Denise were heading to the Kinsman Ridge via a lighter used route for this time of year
- We started around 7:45 a.m. from the Basin and hooked onto the Basin-Cascades Trail to the Cascade Brook Trail and eventually onto the Kinsman Pond Trail.  The snow made the woods look like a winter wonderland and the cascades were half frozen making for a very picturesque hike for the first mile or so.  The snow depth made it tricky to figure out the best traction to wear.  We wore our snowshoes but there were places where it hindered our speed since the rocks and roots were hiding underneath the snow.  If we had put on micro-spikes we still would have had issues, just different ones like ankle twisting/slipping.  It made for a very tedious ascent up to the ridge, especially the middle and upper section of the Kinsman Pond Trail which travels through a sluggish brook in spots.
-  Other than that the hike was great, it was snowing lightly during the ascent up to the ridge and we were shielded from the wind except when we paralleled the Kinsman Pond, which looked ghostly.  At the shelter Kyle and I took a break to change into dry layers, refuel, and wait for Denise.  When Denise reached us she decided it would be best to head down, she was red-lining (hiking all the trails in the White Mountain Guide) and didn't need to tag the summits.  I suggested the Fn' Jimmy to Lonesome Lake to the Pemi Trail or bike path.  Kyle and I then charged up North Kinsman where we caught up to three happy hikers who had come up from Lafayette Place.  We zoomed past them and broke trail to North Kinsman, where Kyle had to turn around so he could make it to work on time.  I continued on, the snow was the deepest here but the trail breaking was easy as it was light and covered most of the annoying rocks or roots enough that I didn't stumbled over them.  It felt good to break trail and I hope to do this a lot this upcoming winter.
- For the descent I headed down Fn' Jimmy to the hut, Lonesome Lake to the campground, and walked the bike path.  On the descent I changed out of my snowshoes at Kinsman Junction which was a mixed bag, my spikes kept balling up with snow and I couldn't get into a good grove with the rocks and roots not buried yet.  I still made good time down to the campground, though, and most importantly stayed warm.
- The walk back along the bike path was nice as the snow fell and the sun tried to come out.  Along the way I heard my name yelled across the river, it was Denise, she was on the Pemi Trail!  Another red-line that she needed, so she hooked onto that instead of the bike path.  I continued back to the Basin and made a U-Turn onto the Pemi Trail and met Denise and we hiked out together.
-  I haven't been on the Kinsmans since April of 2013, so it was nice to get back up there even if there were no views.  Needless to say winter is here to stay in the Whites so bundle up!
FYI, I scratched up my camera lens so I'm taking pics with my Apple phone.  They have an auto-enhance feature which sharpens the image, also some pictures came out B&W by hitting a button accidently, I have no idea why a few came out looking blue and gloomy but whatever, enjoy! 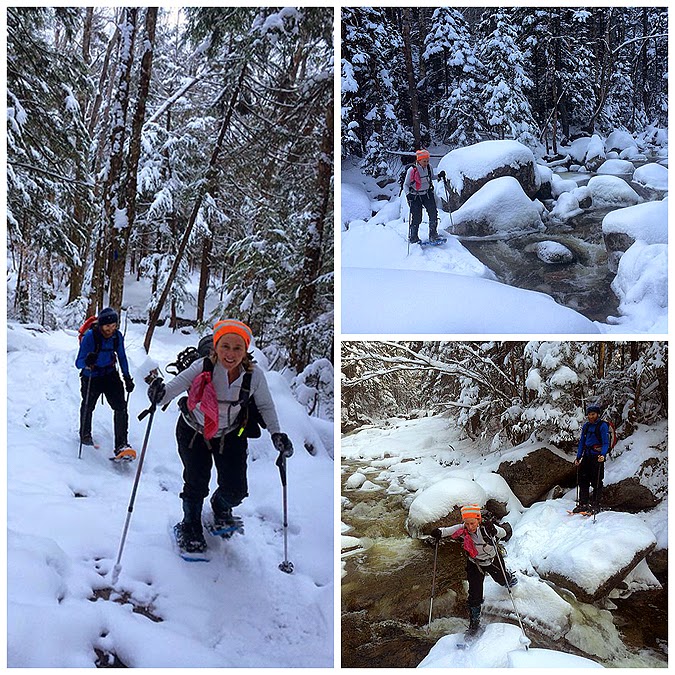 Hiking along the Basin-Cascades Trail 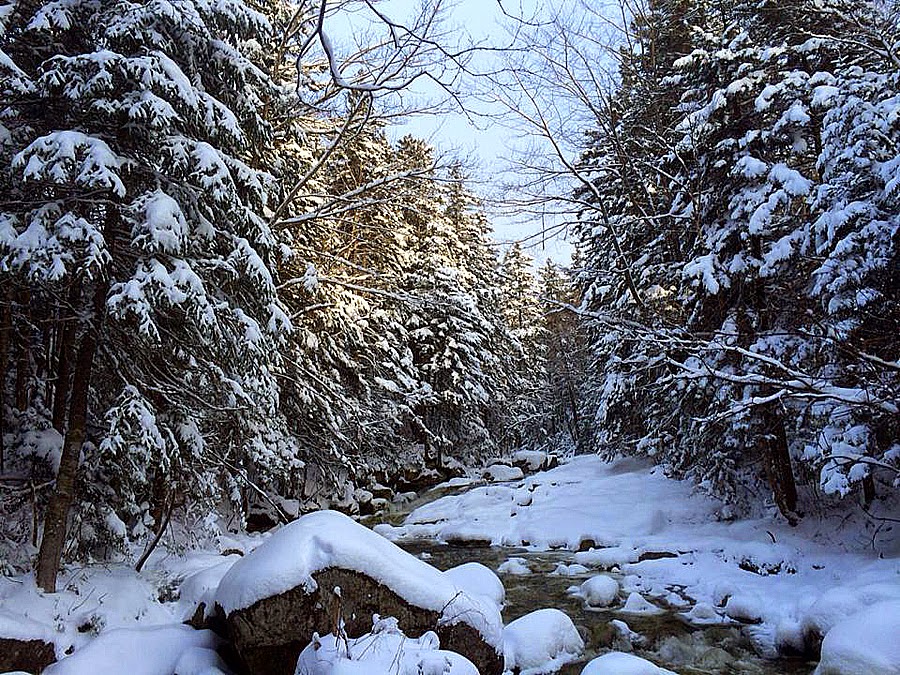 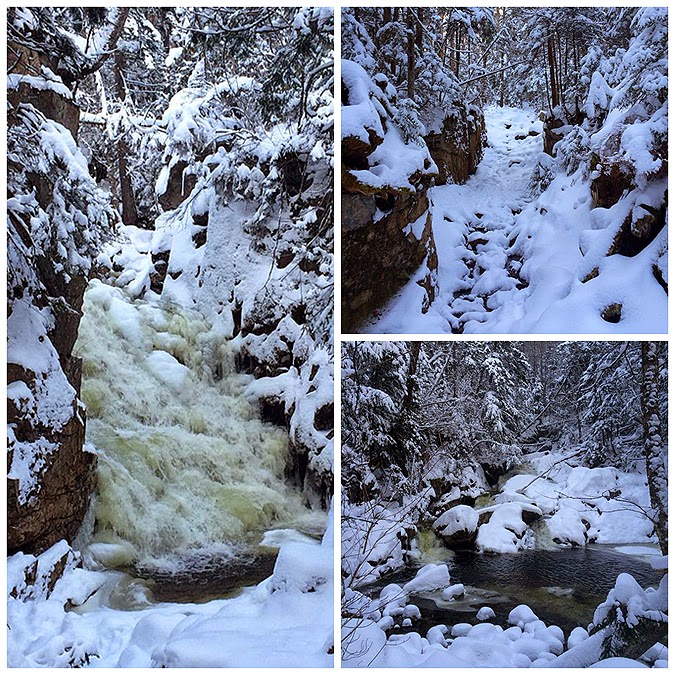 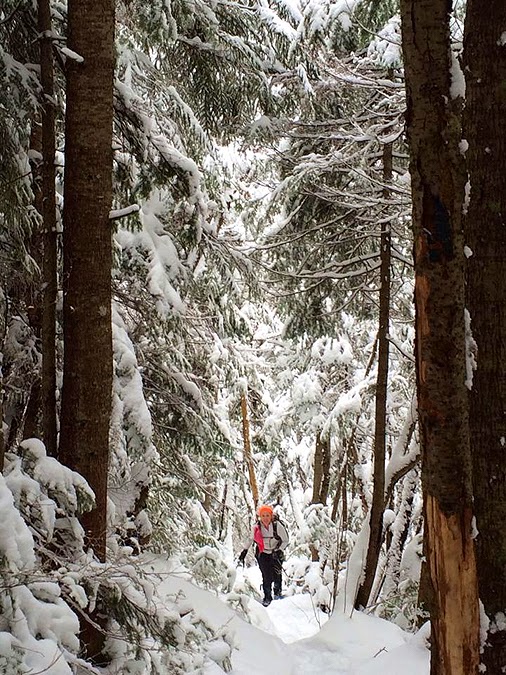 Denise hiking through a winter wonderland 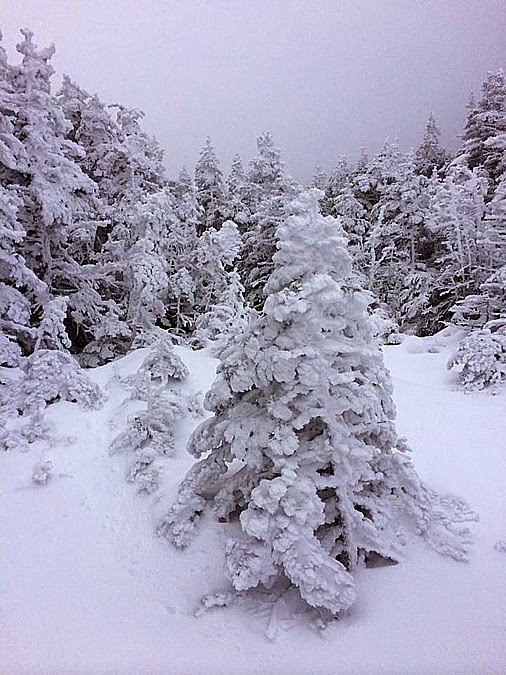 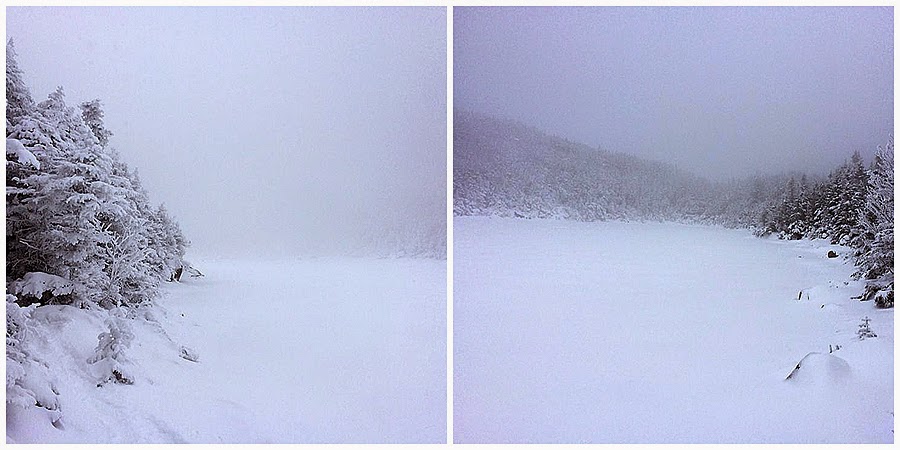 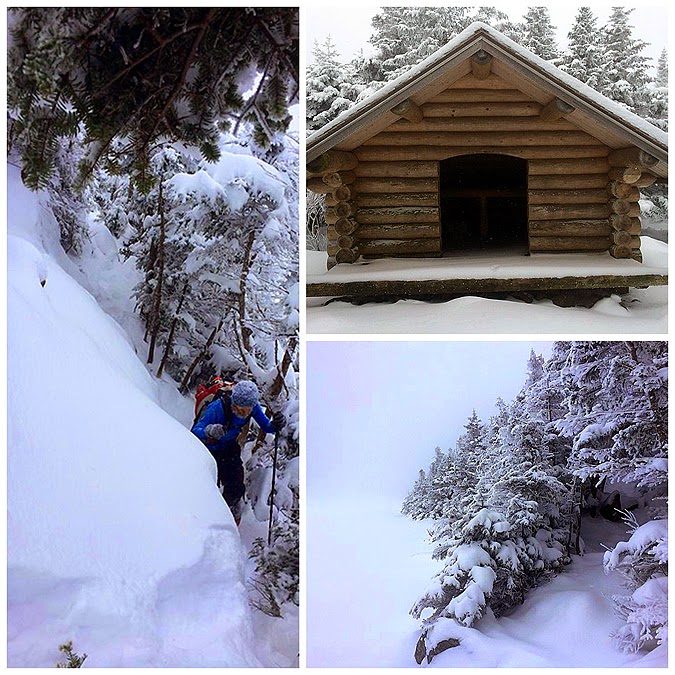 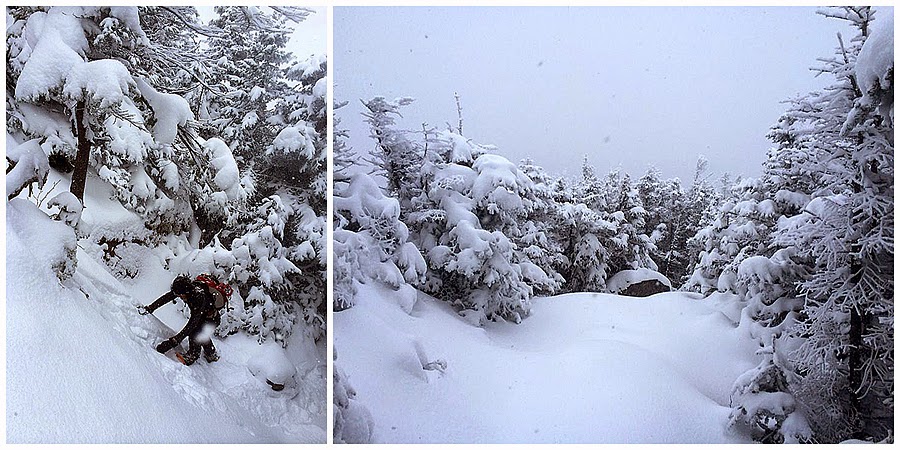 Heading up to North Kinsman 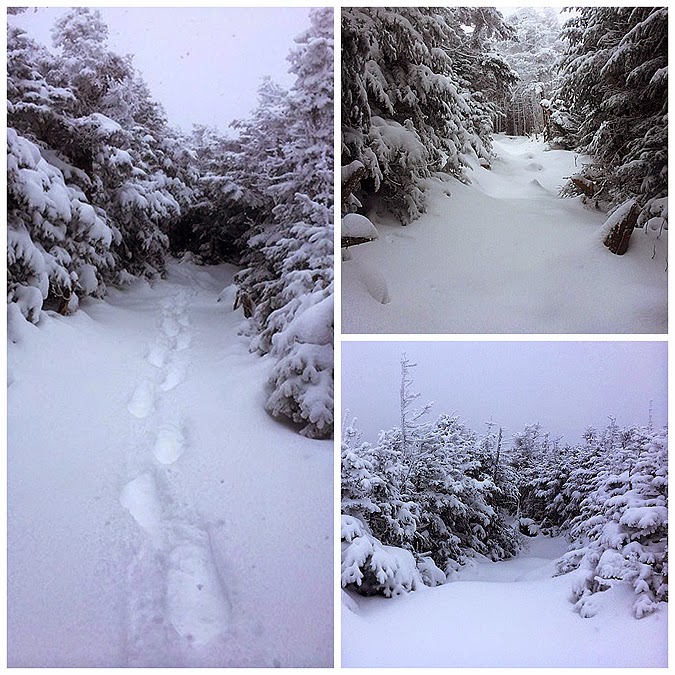 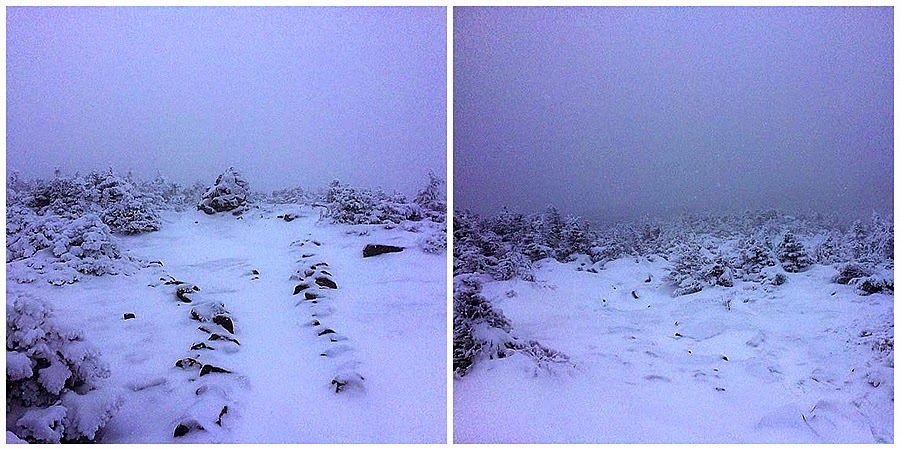 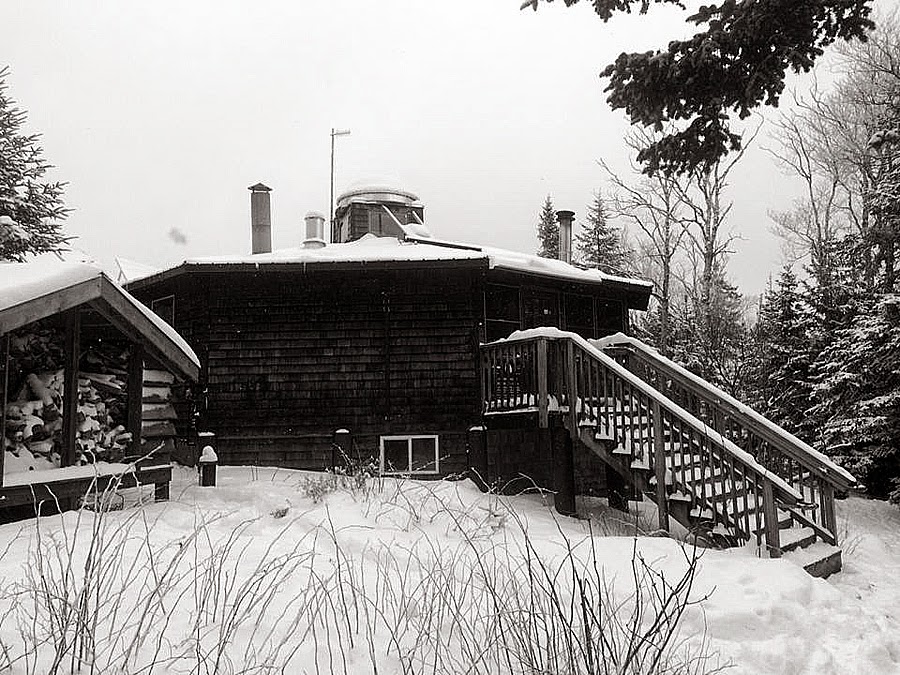 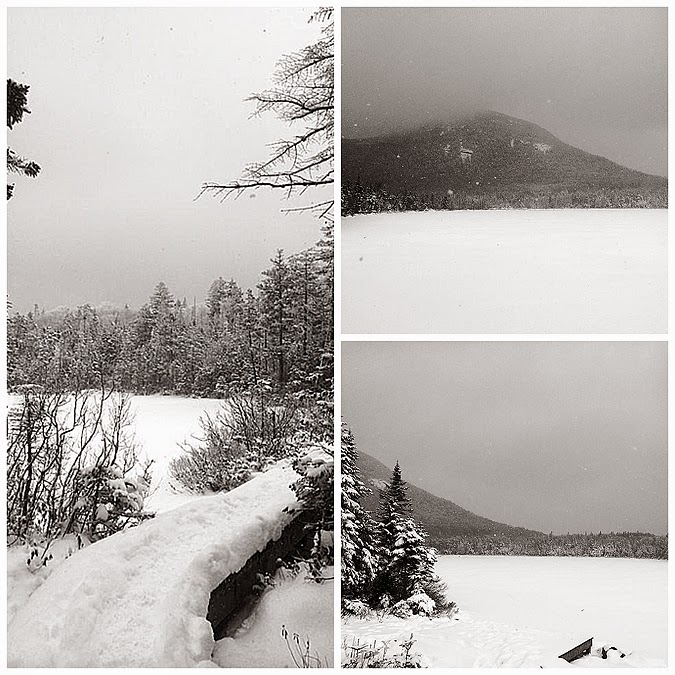 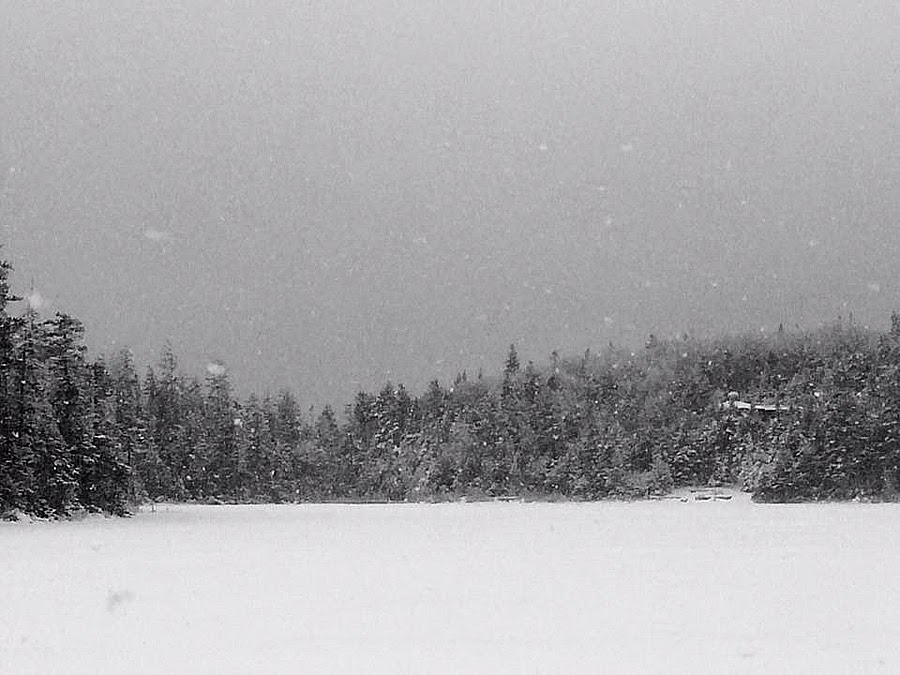 Lonesome Lake and the hut with light flurries falling about! 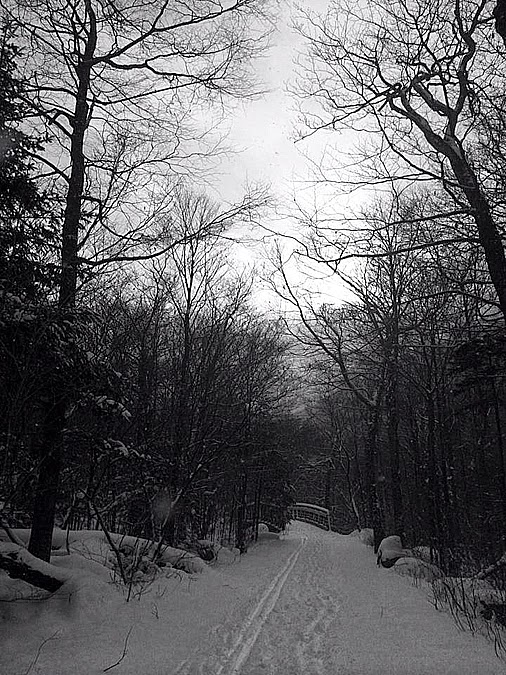 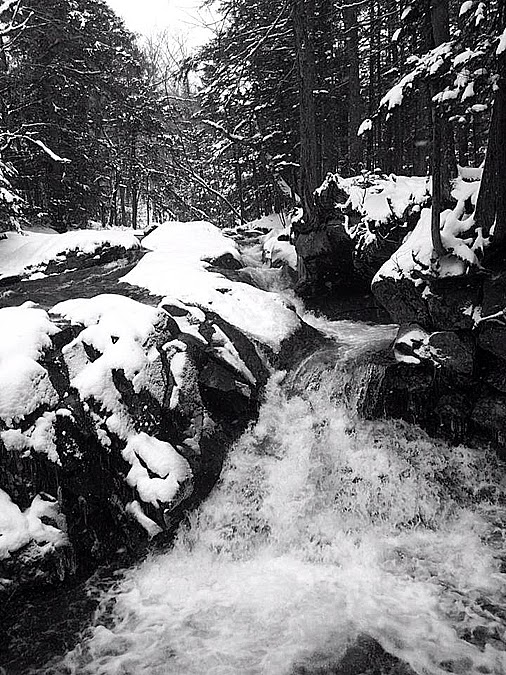 Cascade above the Basin
﻿
﻿
Posted by Chris Dailey at 5:57 PM