Trip Report:
- What a difference a couple of days make!  Last Monday, the hike to Isolation was filled with snow as high winds swept across the birch glades and almost knocked the group I was with off the summit (Click here for that trip report).  On Sunday, the trail was a highway with nicely packed down snow, no wind, and abundant sunshine!
- Like I stated in my previous post I am a 'Orphan Hiker' for the time being and was happy to see that for Sunday's hike we adopted another hiker, Nicole, who was looking for a group to head up Mount Isolation with.  Our group today consisted of Bob & Geri, Tony & Kelsey, Steven & myself, and Nicole!
- Nicole set a great pace over the first three miles to the height of land and the start start of the Engine Hill Bushwhack.  As we hiked over the old logging roads she spotted a Turkey Vulture high up and the tree.  I had actually never seen one while hiking, usually they are spotted on the side of the roads.  It was a pretty cool sight to see and the only wildlife we saw the whole day.
- The hike to Isolation is very moderate with not one steep section until the one hundred yard dash up to the summit from the Davis Path.  When the weather is tame in the winter it is actually a much easier hike than in the other three seasons as the boot-sucking mud, standing/running water in the trail, water crossings, rocks, roots, and rotted bog bridges are covered up nicely with snow.
-  It was interesting to do the hike again less than a week after just doing it.  I kept looking at my GPS watch (awesome Christmas gift from my mom!) comparing how the time was quicker than before because of not having to break the whole trail out!
- The real gem of the hike are the birch glades that are traveled through on the 'Engine Hill Bushwhack.' The bushwhack is used in the winter to cut a couple miles off the trip and avoids a few water crossings.  It starts about three miles in at a 'T' carved into a pine tree. It was such a great day out that we took our time heading through the glades taking it all in as it was the first time Tony, Kelsey, Steven, and Nicole had been through it.  I hope to head here in the fall to check out the glades at peak foliage, it'll be really muddy and wet in places but must look amazing in early October.
- After the birch glades we went full speed ahead to the Davis Path Junction.  As we passed one of the designated campsites we saw that a previous hiker we had passed had spent a planned night there, that must have been really chilly but really cool spending a night under the stars in the dead of winter.
-  Once we gained the ridge I told Kelsey I really like to push it along the ridge to the spur path below the summit so we took off until a partial clearing of a great view just below the summit.  Soon after we were all back in a group as we went up the final steep section to the open summit where we were greeted with phenomenal views and no wind!  We took a bunch of pictures and had lunch and enjoyed a perfect bluebird day on Isolation.
-  After a nice break we hiked back out, while Nicole and Bob took off as Bob took pictures of Nicole while she sledded sections with her plastic butt sled!  We all met up back at the 'T' tree at the beginning of the Engine Hill Bushwhack with just under three miles back to the car.
- Bob, Nicole, and Tony took off there snowshoes and I said I was going to try and beat them to the trailhead with my snowshoes on.  So I took off sprinting down the rest of the way, figuring they were chasing me, of course no one was!  It felt great to run, even in snowshoes, the Tubbs Flex Alp aren't great to run in but over five years of owning two pairs I've figured out how to. I blitzed down the mountain, picking up a fallen map along the way and passing two guys we had previously seen as they were enjoying the last mile back to the car.  I was out of breath by the parking lot, which was a great way to finish up Isolation.
- I changed and waited for the others, talking to the two guys who are on Hike-NH, they are closing in on their Winter 48.  Tony came out of the woods first followed shortly by Kelsey, followed by Bob and Nicole, with Geri and Steven popping out a few minutes after them.
- It was another great hike of Isolation with a really fun group.  I hope Nicole enjoyed our goofy banter (Making fun of my dating adventures and Steven's love of his life that he has yet to meet!).
- After saying our goodbyes I took off back to RI and just missed out on the nasty weather and caught a great sunset drive through the notches! 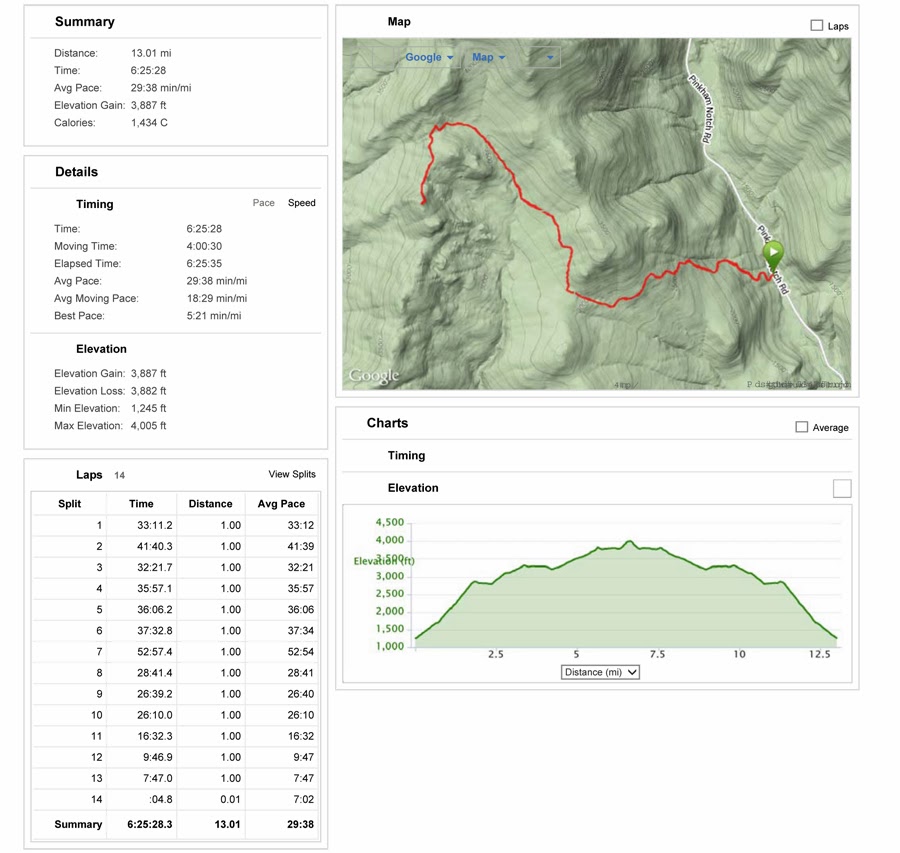 Trek of out route, click here for more info 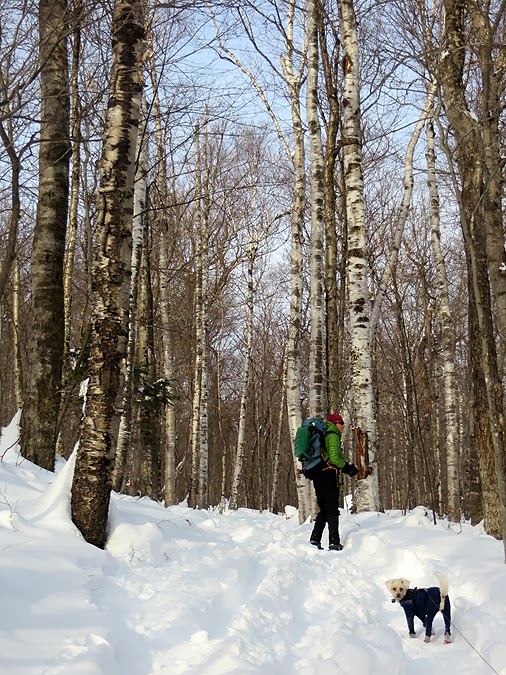 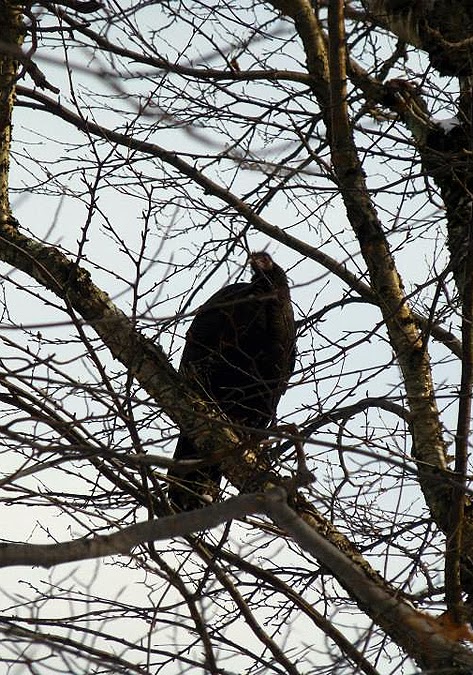 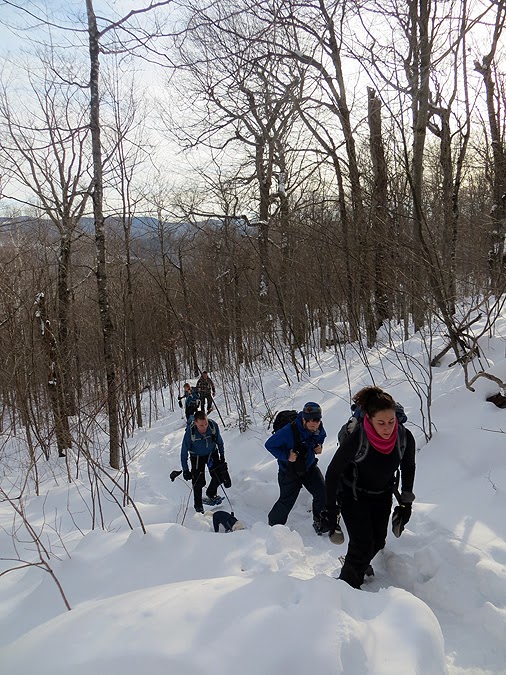 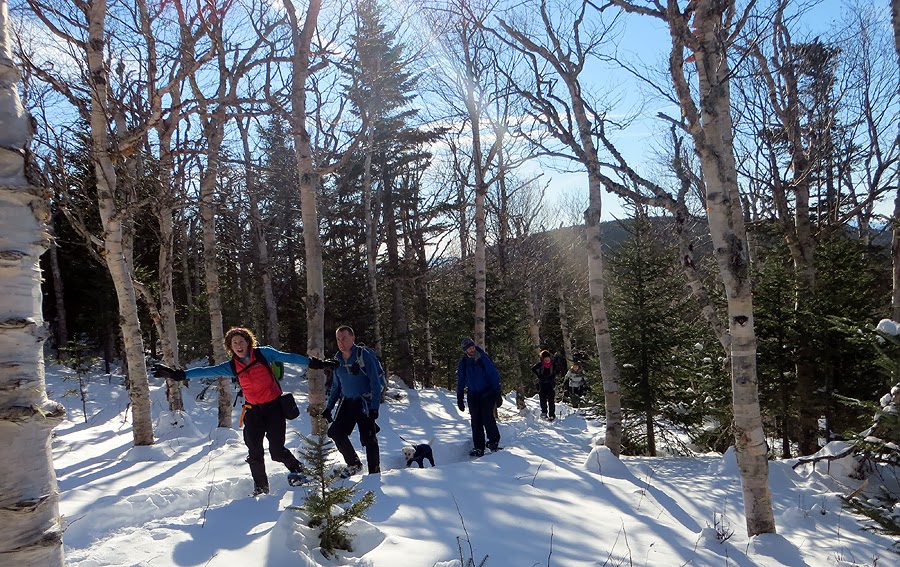 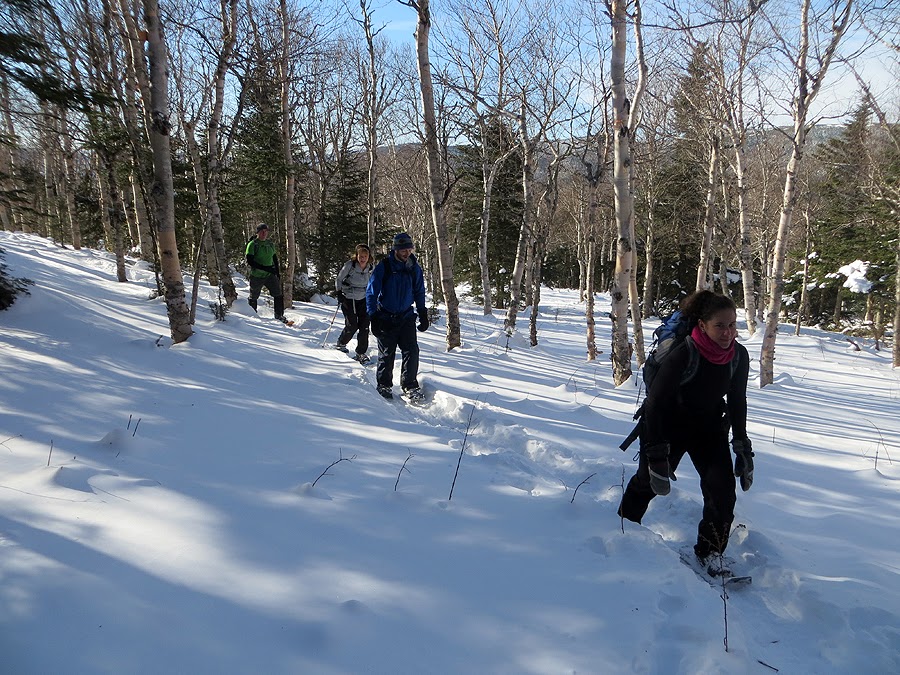 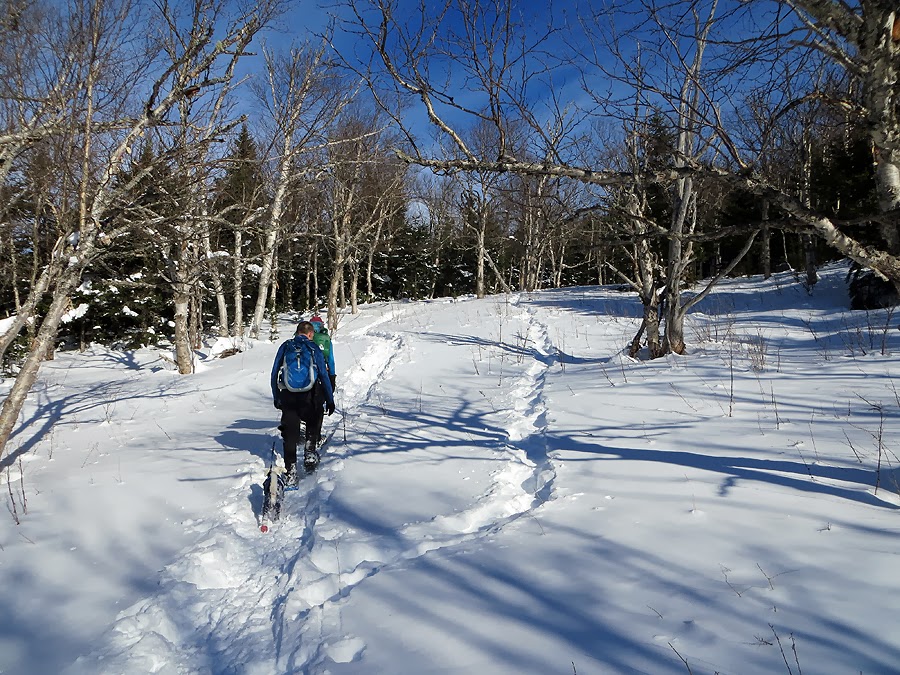 Nicole and Bob lead the way 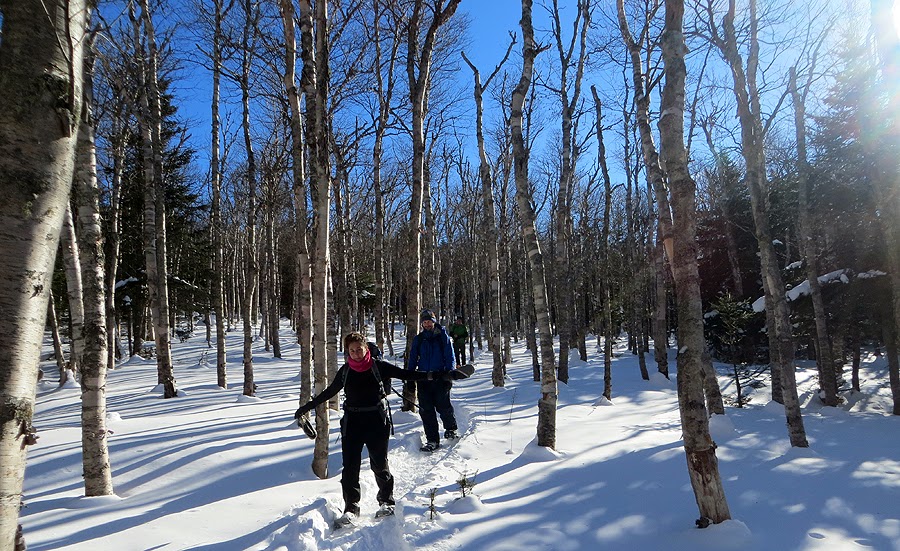 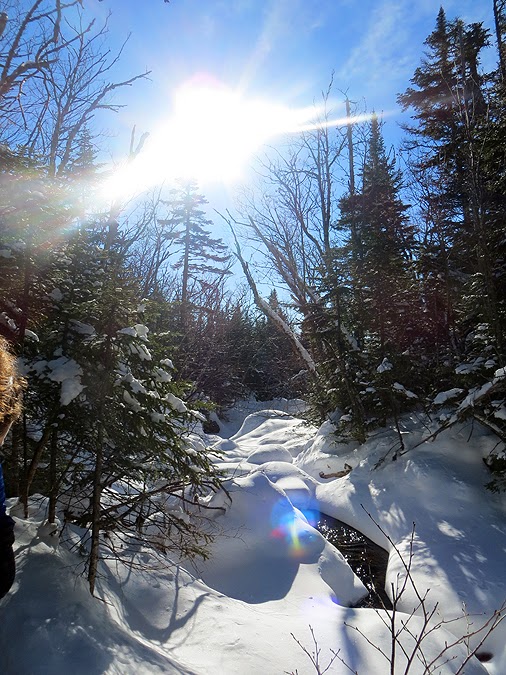 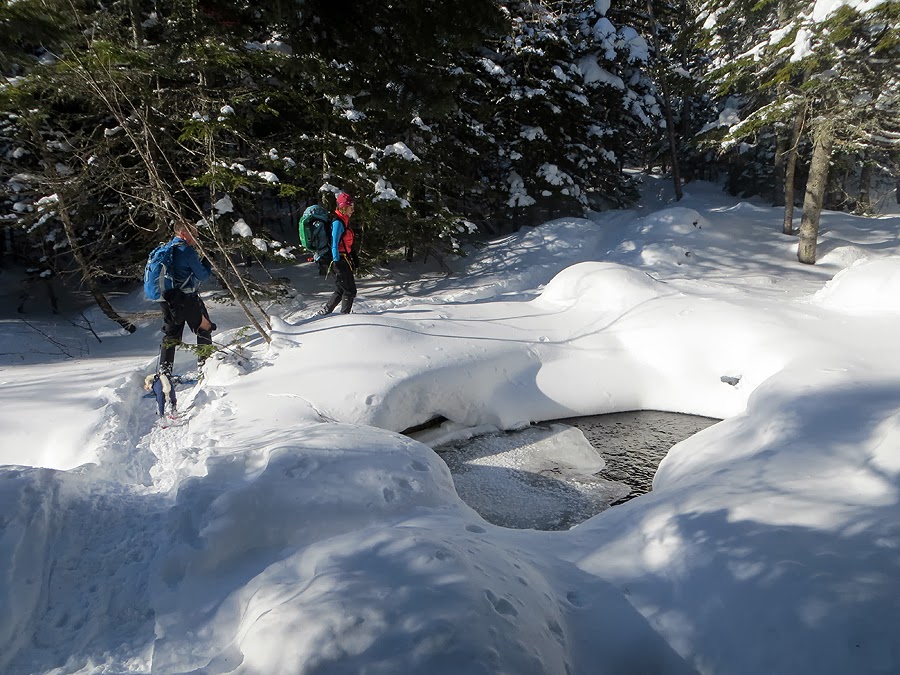 Solid snowbridge over the Rocky Branch 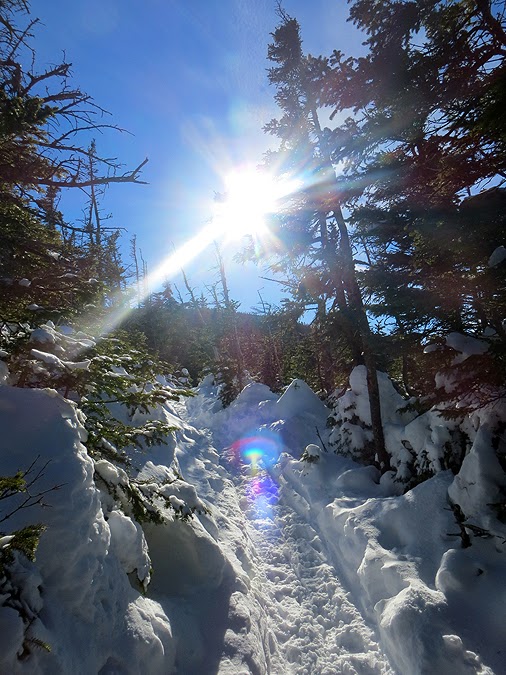 Along the Davis Path 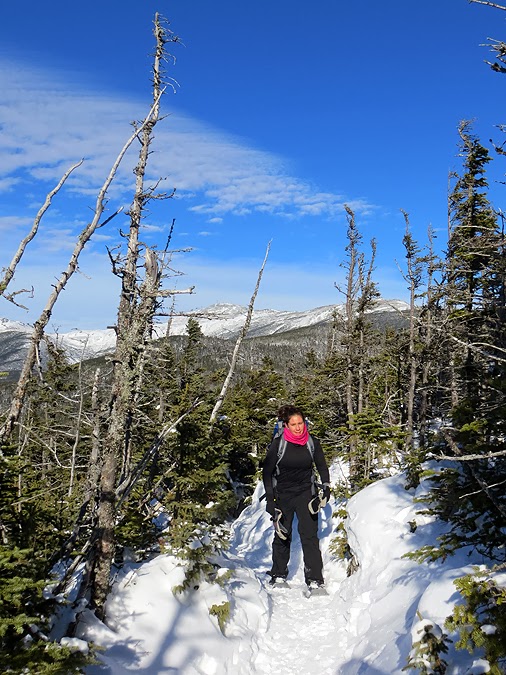 Kelsey heading to the summit 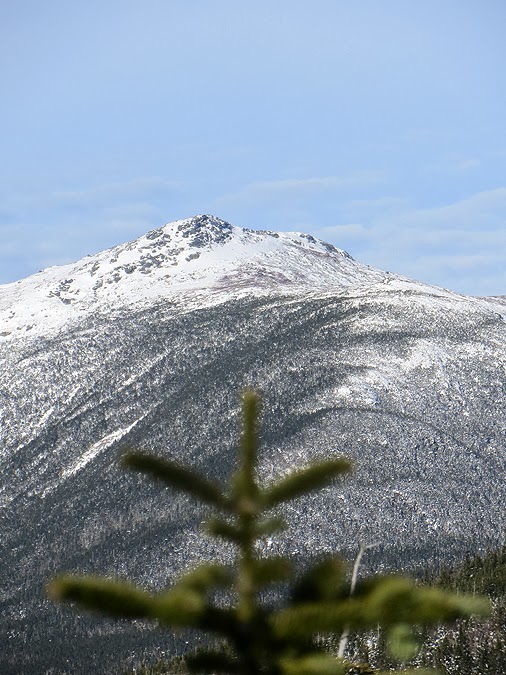 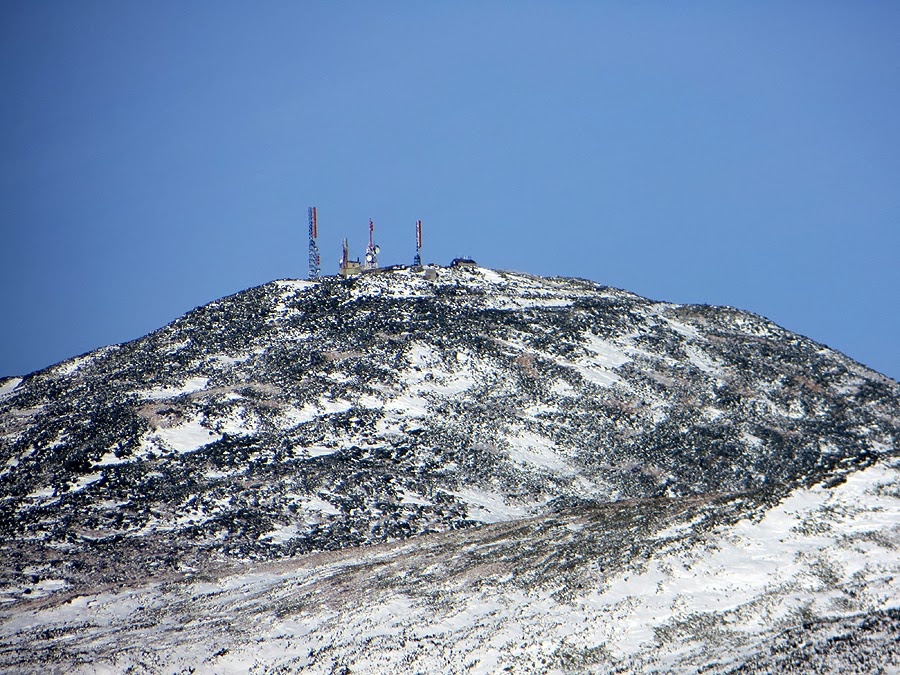 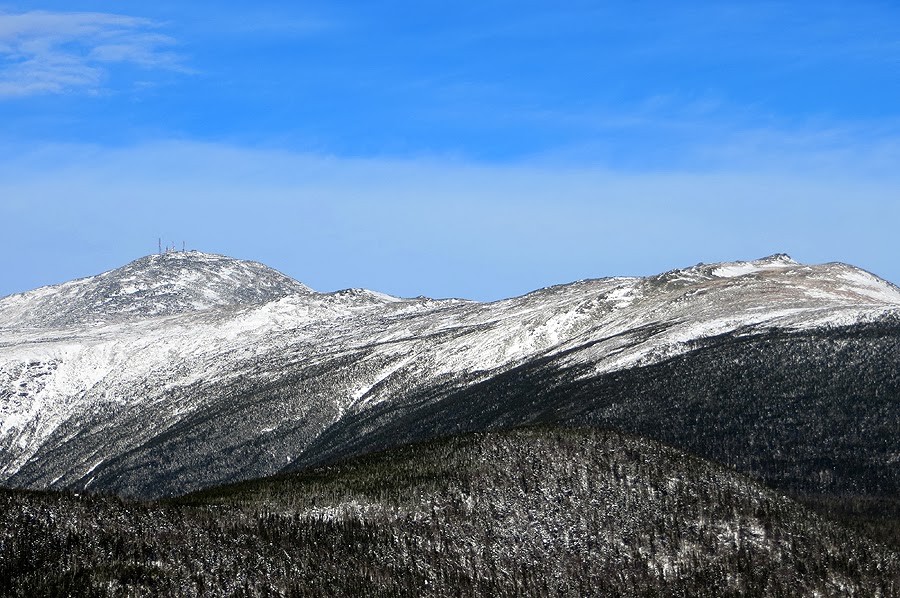 Mount Washington and the Boott Spur 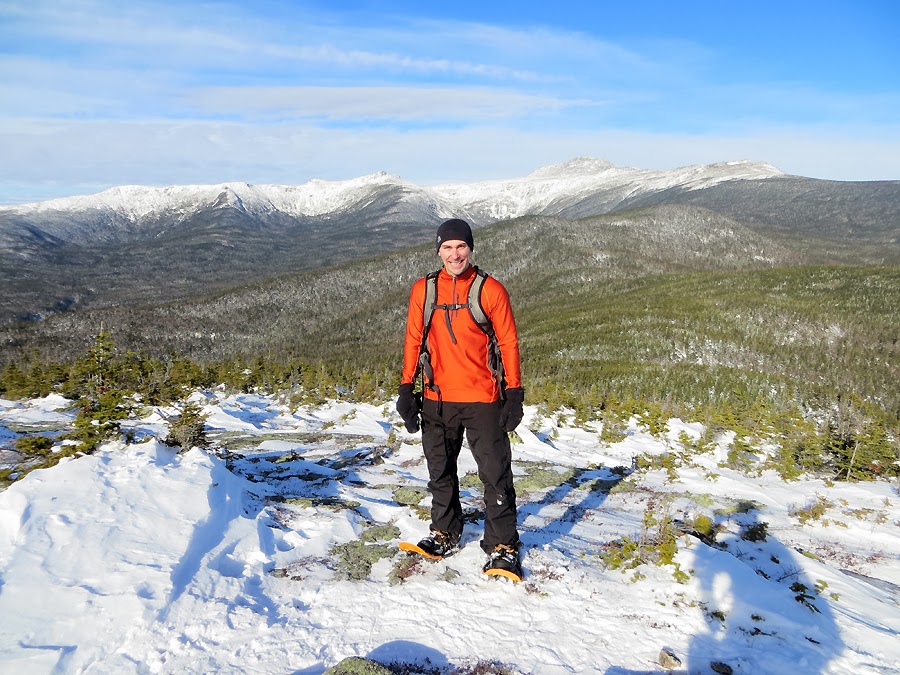 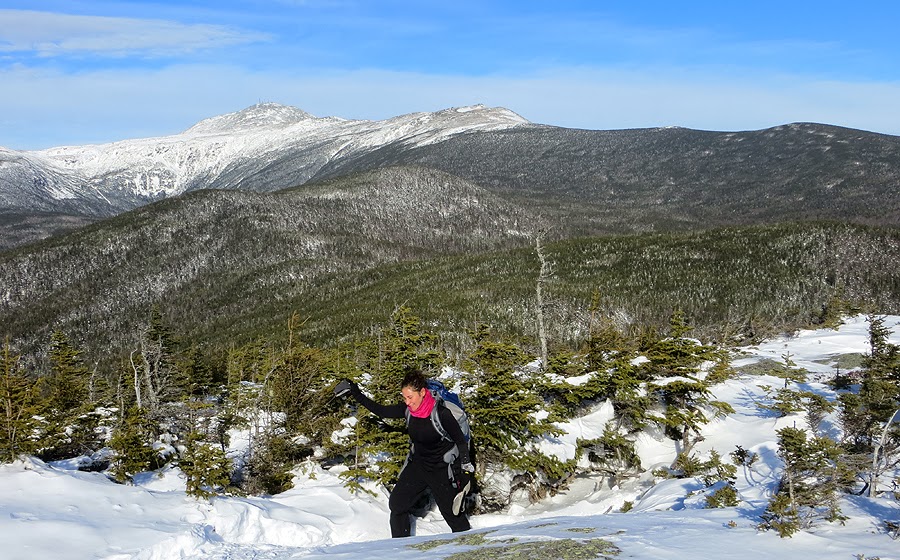 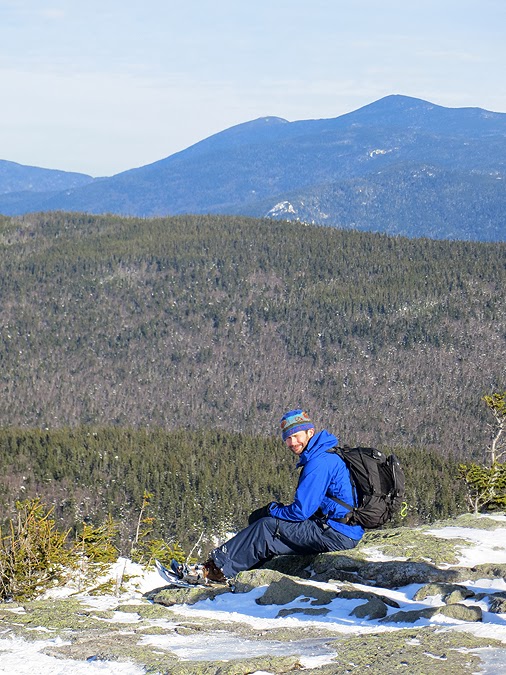 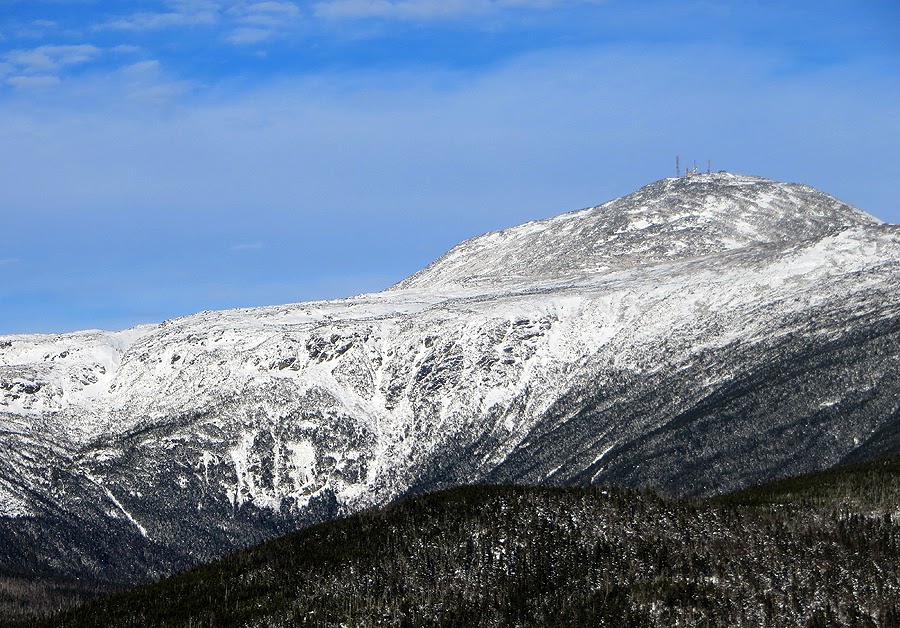 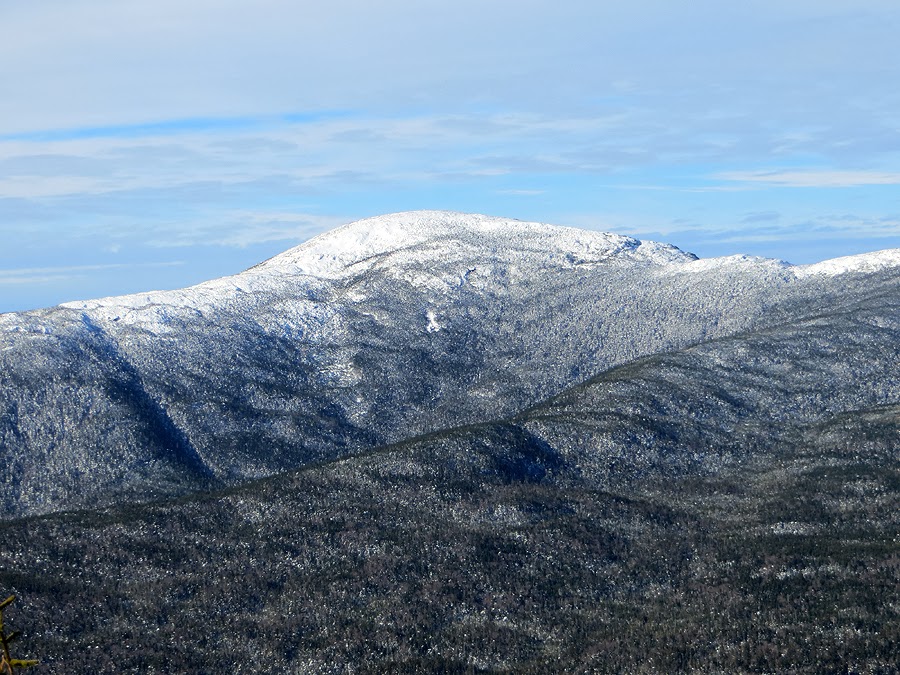 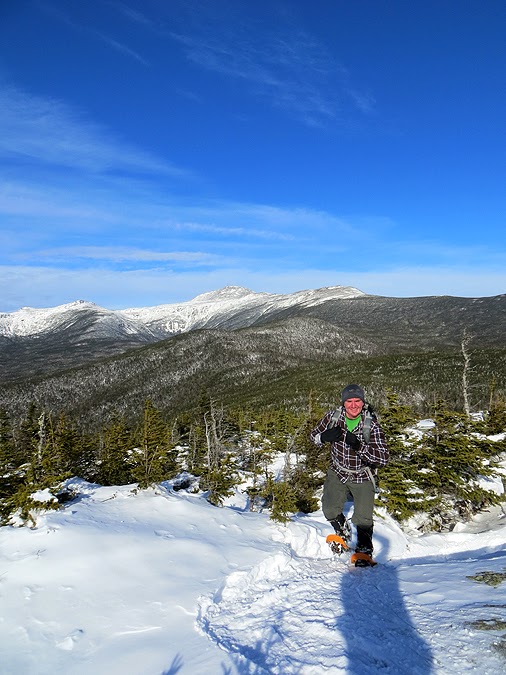 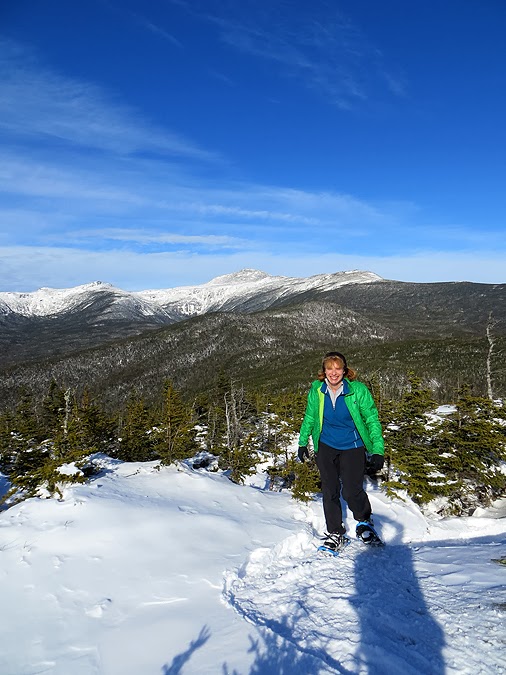 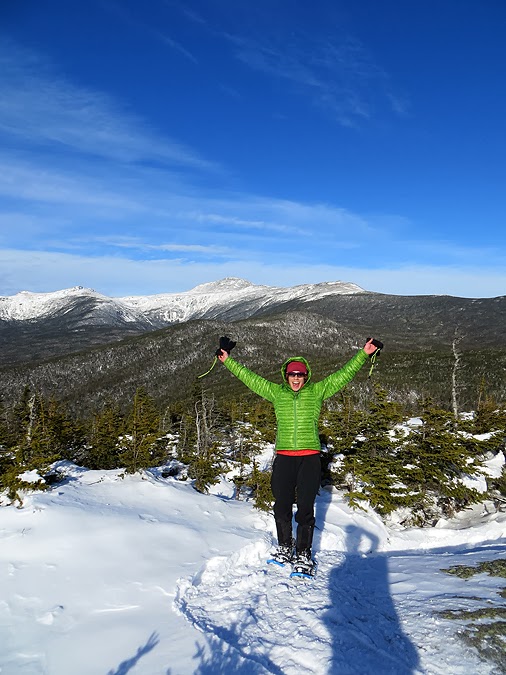 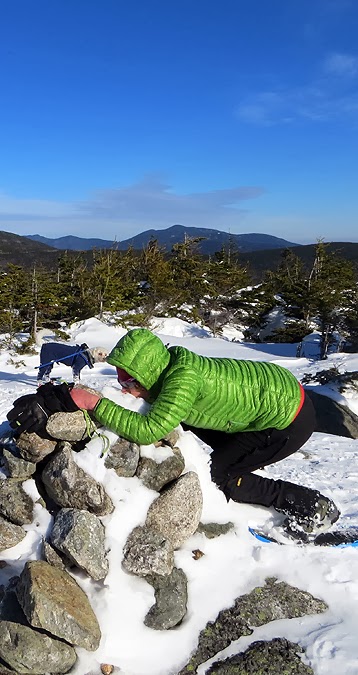 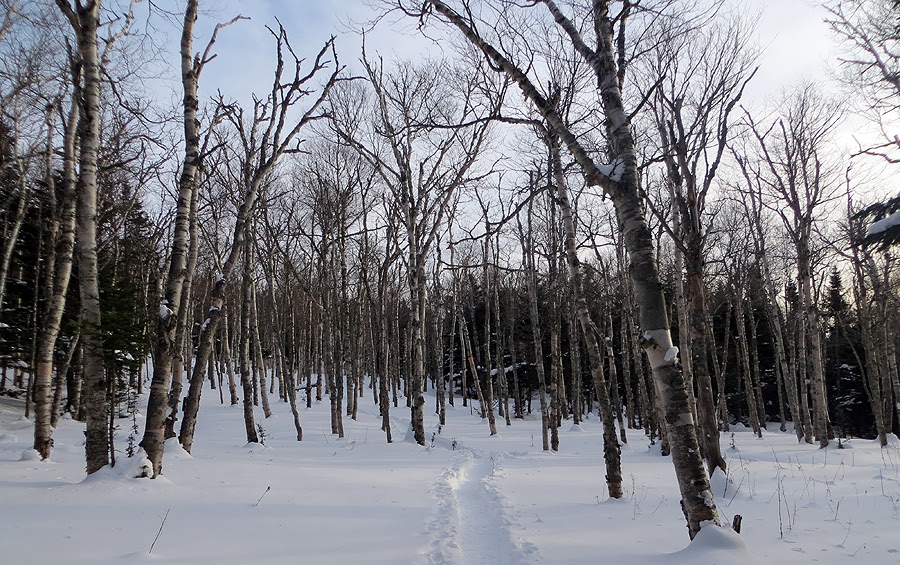 Back in the Birch Glades 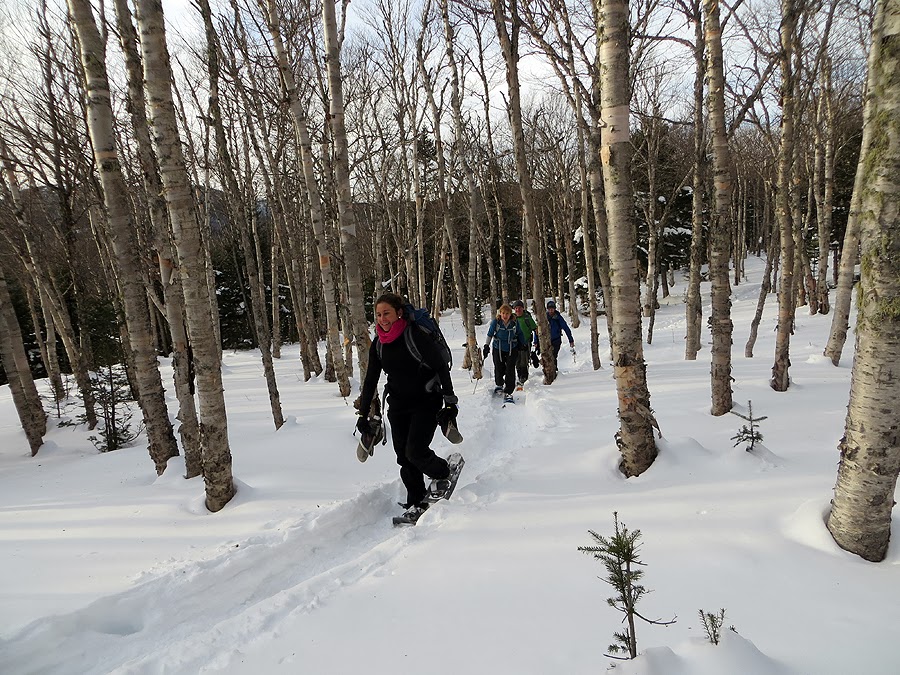 Kelsey heading back through the Engine Hill Bushwhack 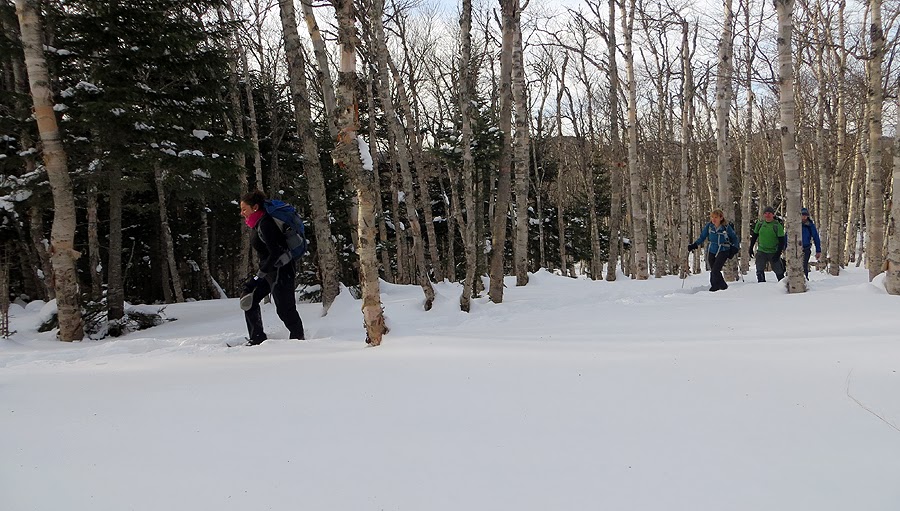 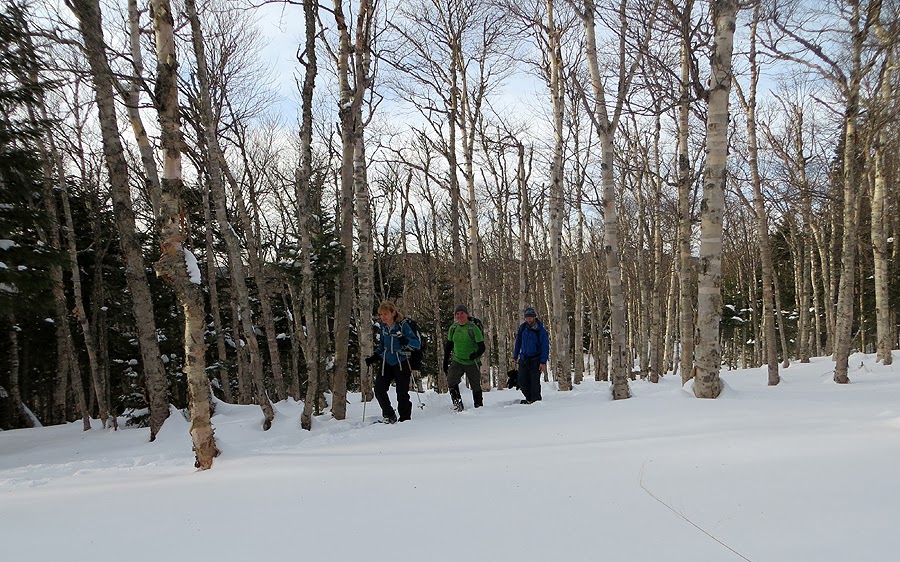 Geri, Steven, and Tony
Posted by Chris Dailey at 5:44 PM