Click here for Saturday's pictures    /    Click here for Sunday's pictures
Carters & Cats﻿
- On Saturday I headed over to the Pinkham Notch to hike the Carter and Wildcat mountains.  Originally I was going to park at Pinkham Notch Visitor's Center (PNVC) and get the road walk out of the way early in the morning but the notch was blanketed in thick fog and cloud cover and I didn't feel like getting run over by a car or trampled by a moose so I just headed to the Ninteen-Mile Brook trailhead and hoped that the clouds and fog would burn off before I reached the viewpoints.
- I decided to hike a few tenths of a mile up the road to Camp Dodge and use the "cut-off" through the woods to the southern link of the Imp Trail.  I have been to Camp Dodge several times but never used the cut-off, so I really had no idea where it was.  I ended up using a path behind the mess hall and followed that to a dead end then hooked onto a very overgrown old logging road that parrallelled Cowboy Brook before I realized this was probably not the right path so I just cut through the woods until intersecting the Imp Trail.
- The weather was gradually clearing as I ascended the Imp and North Carter Trails. Along the way I passed two girls from VFTT (Sarah and Ali and there hiking doggy Hannah) who were also doing a Carter and Cats Loop then a little later I saw two guys who were bailing because they were soaked and cold.
- Once I gained the ridge I went a few tenths of a mile over to North Carter's summit and back.  The summit sign on North Carter is no longer there, just a pile of rocks is left where the sign used to be.
- The hike over Middle and South Carter was good, the weather kept improving and the views across to the Presidential Range were getting better and better.  By the time I made the steep ascent up to Mount Hight the views to the east down into the Wild River Wilderness into Maine and west across to the Presidential Range were phenomenal!
- I took a nice long break on Mount Hight to have lunch before heading over to Carter Dome where I encountered the only significant stretch of snow all day, there was a dying mono rail and snow spine leading up to the summit, a couple of feet deep in spots but it was not a problem and will probably melt off in a week.
- I took another break on Carter Dome to delayer, from here on out I was in short sleeves, it felt great to finally be hiking without layers for the first time since last October.
- Dropping down into Carter Notch from Carter Dome is steep with some rought footing, but there are a couple of killer view spots along the way to make it worth it.
- Usually I head over to Carter Notch Hut but I decided not to and just start the steep ascent up the Wildcat Ridge Trail.  Unfortunately the care taker at the hut was giving out free brownies so I missed out!
- The hike up to Wildcat "A" Peak went better than usual, I usually hit a wall about two-thirds of the way up but this time I was fine.  The view from the summit outlook was great as usual where I took a snack break before putting my head down for the mini-slog over the "puds" to "D" Peak.
- There is a really great view of Mount Washington and the ravines coming down from "B" peak but other than that the trail is in the woods until arriving at the observation tower on "D" Peak where I took a nice long break looking across to the the Presidential Range and down into Pinkham Notch.
- Now it was time for my second favorite part of the hike, getting to hike down the ski trails.  I stayed on the Pole Cat - Dead Cat - Smelly Cat Ski Trails while enjoying the up close views of the Gulf Of Slides, Tuckerman, Huntington, and the Ravine of the Raymond Cataract on Mount Washington before hitting NH Route 16 where it was a quick and easy 2.5 mile walk back to my car.
- After cleaning myself up I headed to Gorham to Mr. Pizza to stuff my face with food and have a cold beer before heading to Haystack Road to set up my tent and watch the 'Super Moon' rise high in the night sky. It was an awesome site but I kept waking up  during the night thinking somebody left the lights on!
- On Trail 8:30am, N. Carter 10:30am, M. Carter 11am, S. Carter 11:30am, Hight 12:05pm, Carter Dome 12:50pm, Carter Notch 1:40pm Wildcat "A" 2:10pm, Wildcat "D" 3:05pm, NH 16 4pm, finished 4:45pm. Weather in the high 40's to low 60's, in the clouds until 10:45am, winds 15-20 mph, saw 18 other hikers.

Jefferson through Jackson
- I felt very refreshed when I woke up early Sunday morning, I checked the Mount Washington Observatory it it looked like a fantastic day for a long hike above treeline.
- I headed over to the Ammonoosuc Ravine / Jewell trailhead where I packed up my gear and made my way up to the Caps Ridge Trailhead by way of the Jewell and Boundary Line trails and Jefferson Notch Road.  I was hoping to see a moose while walking the road early in the morning but I only saw some hoof prints and poop in the dirt road.
- The Caps Ridge Trail is one of my favorite trails, it quickly gets you above treeline and it has some minor/easy rock/boulder scrambling. There are three 'Caps' as you ascend up to the summit of Mount Jefferson, the second cap sticks out the most and is the most fun.  When the trail reaches the bottom of the second cap you have the option to follow the old faded paint blazes up the rocks or follow a beaten path to the side avoiding this small scramble.  I of course chose the scramble, it's pretty easy but a lot of fun!
- The views were great so far but as I passed the Cornice junction the wind changed direction and started bringing in clouds from the north east.  I made it to within a quarter mile of the summit before the clouds socked me in.  From here until reaching Lakes of the Clouds I would be walking in the clouds and wind with minimal views.
- On the summit of Jefferson I got out of the wind and put on my winter gear (minus traction) and made may way over to Mount Clay and up to Washington where I ran into a group of six, one of which was Mallie (Early Bird from VFTT), they had come up from the Lion Head Trail and were doing a kick ass Northern Presi Traverse through Madison and out the Pine Link Trail.
- Now it was time for phase two of my hike along the Crawford Path and a couple of loop Trails.  The skies gradually cleared as I descended to Lakes of the Clouds Hut and by the time I was on Mount Franklin blue sunny skies were all around me.
- There is a section of the Crawford path just south of Mount Franklin which is my favorite stretch in the Southern Presidential Range, it's a small hump with a level stretch with rocks neatly placed to make a border for the sides of the trail.  I've been on this stretch several times and there's no one ever on it and the 360 degree view is simply awesome.
- I made it to Mount Eisenhower during the noon hour and enjoyed lunch while talking with some hikers before heading over to Mount Pierce. The weather had warmed up and I was losing elevation so I was back in a tshirt, it was sunny enough that my neck did get a little sun burnt.
- The hike over to Mount Pierce is half in the open, half in the scrub, with fine views down to the Mount Washington Hotel.  Mount Pierce has the last up close great view of the Presidential Range.
- Now it was time for phase three of my hike which was back in the woods down to Mizpah Spring Hut and over to Mount Jackson before heading down to Route 302.  It's not a difficult hike but the last part of the trail down to the hut and the Jackson link of the Webster-Jackson Trail are usually the worst heavily used trails in the White Mountains and Sunday they did not dissapoint with standing water, running water, erosions, exposed roots, nasty rocks, and loose trees, basically the trails are in mid season form!  Luckily views from Mount Jackson's summit make it all worth it!
- Once down to Crawford Notch it was a long road walk back to the car, my feet were hurting, I wore my old boots expecting snow up higher but there wasn't so I wished I had worn my trail runners.  Other than that it was a nice walk with some views along Clinton and Base Road up to Mount Washington.  I made it back to my car just after five and quickly got out of my smelly clothes and stretched for a long time before heading back to RI after a great two days in the mountains!
- On trail 7am, Caps Ridge trailhead 7:50am, Jefferson, 9:05am, Washington 10:45am, Monroe 11:45am, Eisenhower 12:45pm, Pierce 1:25pm, Jackson 2:25pm, Route 302 3:35pm, finished 5:10pm.  Saw 30 other hikers, temps between the low 30's to low 60's, winds up to 25mph but died down quickly to light and variable, visibility between 200 feet to 75 plus miles. 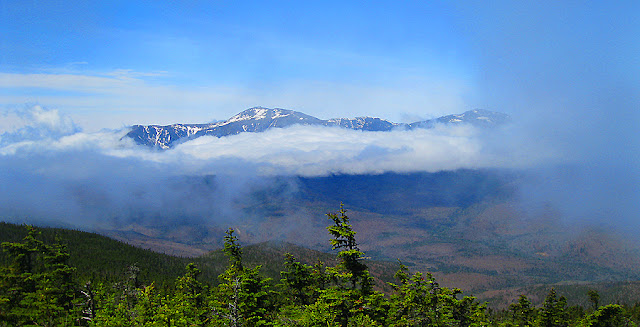 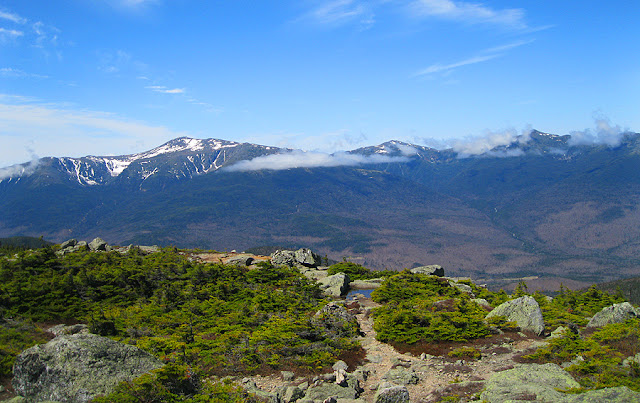 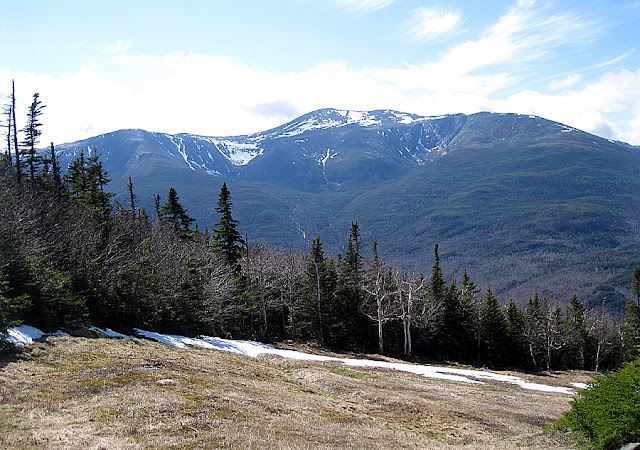 Mount Washington from the ski trails 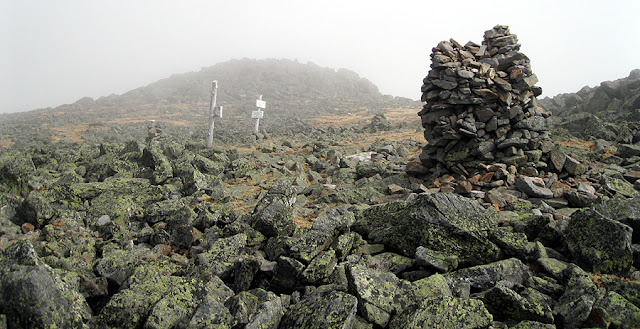 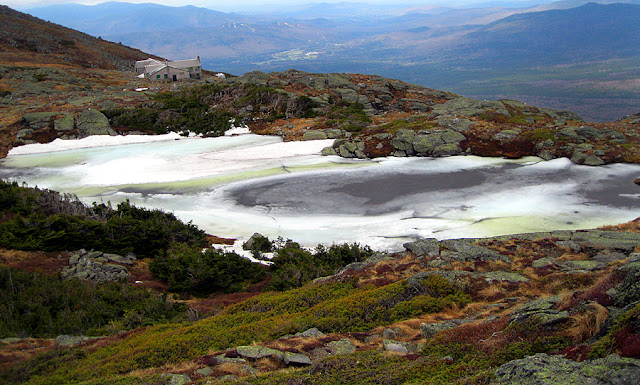 Lakes of the Clouds

Lakes of the Clouds and the Hut 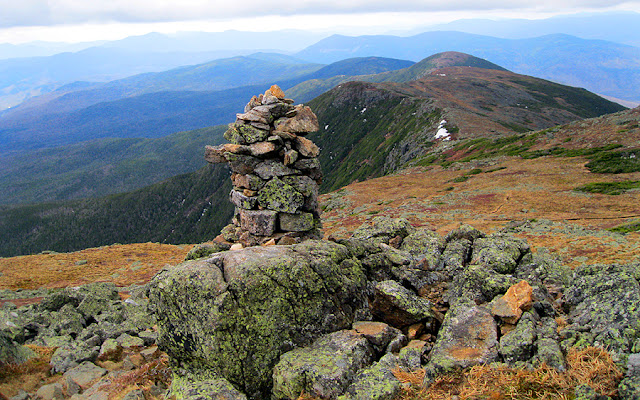 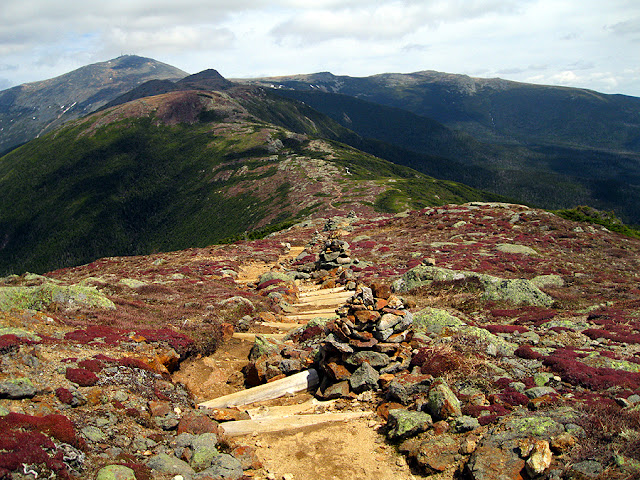