The Wolfjaws from Bennies Brook Slide

Trip Report:
- The forecast for Sunday was supposed to be crummy but I woke up to bluebird skies and some puffy white clouds.  I knew the great weather would probably only last until early afternoon so I gathered up my gear and quickly headed to the Garden Trailhead to hike Lower and Upper Wolfjaws via Bennies Brook Slide.
- Bennies Brook Slide is a beginner's slide, it was partial overgrown in spots until Hurricane Irene came along and opened it up creating a huge open highway of slab with debris on the edges of the slide along with mud and huge misplaced boulders in places. It never gets really steep until the end and is an incredible sight...basically this is the only way a hiker should summit Lower Wolfjaw!!
- There are two ways to get to the Bennies Brook Slide, one is to take the Phelps trail to the Southside Trail for about 2.75 miles or just stay on the Phelps Trail to the DEC Interior Outpost and hook onto the Southside Trail for about a half mile to the slide.  I decided to take the latter approach because the Southside Trail had been damaged by Hurricane Irene and I didn't want to chance it.  I did however check out the water crossing about a tenth mile down the Southside Trail to see if it was difficult, it wasn't so I decided I would head back the Southside Trail later in the day.
- The Bennies Brook Slide isn't the first slide that you come across on the Southside Trail from the Interior Outpost, the Wolfjaw Brook Slide is.  Once past the Wolfjaw Brook Slide it's only about a five to ten minute walk until the Bennies Brook Slide where the real fun begins.
- This slide is magnificent and the debris and destruction was wicked. Meanwhile hiking up the slide was easy and the views were phenomenal, the slide is huge and becomes extremely wide in places, I felt like a tiny ant wondering back and forth up the rock slab, over ledges and boulders, and through the mud.  There was water running in cracks, cascading over slabs, around and over boulders creating mini waterfalls, and pools of water filled with tadpols of all things!
- The slide almost goes all the way to the top of Lower Wolfjaw's summit, it gets really steep in the last 50 to 75 feet, I tried to make it up one final steep burst before heading into the woods but had to down climb about ten feet back to the left side were I headed into the woods and popped out on the W.A. White Trail a couple of minutes later and then headed up trail another five minutes or so to the summit.
- I took a much needed break on the summit, I was drenched in sweat and even a little tired from the steep hike up.  The weather was changing, the skies were becoming cloudy and the rain was definitely on its way but I was pretty confident I could head over to Upper Wolfjaw and get most of the way back to the car before the rain came.
- The Wolfjaws pack a powerful one two punch along the Great Range, from Lower Wolfjaw you descend very steeply to Wolfjaw Notch then it's up and over what I refer to as Middle Wolfjaw then over to Upper Wolfjaw.  It's a real ass kicker of a hike, the footing is awful and the trail is steep, there's one section with rope that is there to help hikers out, I actually think it's not needed at all, and it almost killed me as the rope got caught on my backpack and tried to throw me ten feet down into rocks, roots, and trees, not fun!
- Upper Wolfjaw's summit is a ledge that has good views to the south and east and made a perfect spot for a nice little break before heading back to Wolfjaw Notch.
- At Wolfjaw Notch I took the ADK Range Trail, I was expecting an awful trail but was surprised as it was in great shape and easy on the legs.  about halfway down I spotted the Wolfjaw Brook Slide to my left so I cut through the woods and hopped my way down the slide.  I hiked the slide for about a half mile over boulders, lose rocks, mud, and piles of trees smashed together everywhere.
- After awhile I kept a lookout for the ADK Range Trail, and as luck would have it I spotted it crossing the slide so I hooked back on it and took that down to the Southside Trail.
- The Southside Trail only has one awful section that was crushed by Hurricane Irene, the trail abruptly ends at a cliff with a pool of water about 25 feet below the edge.  I backtracked about fifteen feet and spotted a crude herd path that went over and around then dropped down to Johns' Brook, nothing to it!
- The rest of the hike was business as usual and the rain held off just as I reached the Garden...perfect timing! 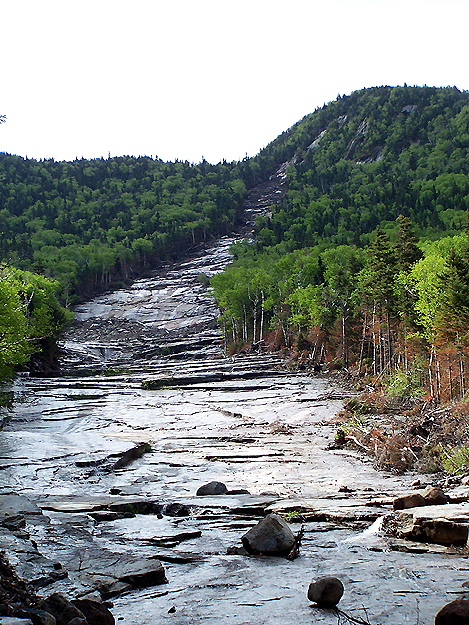 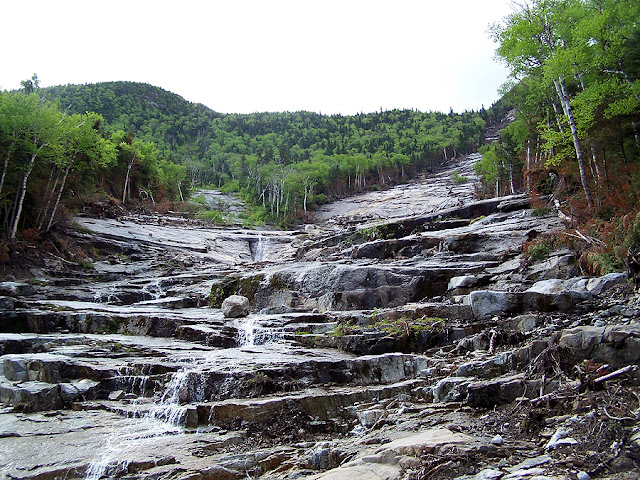 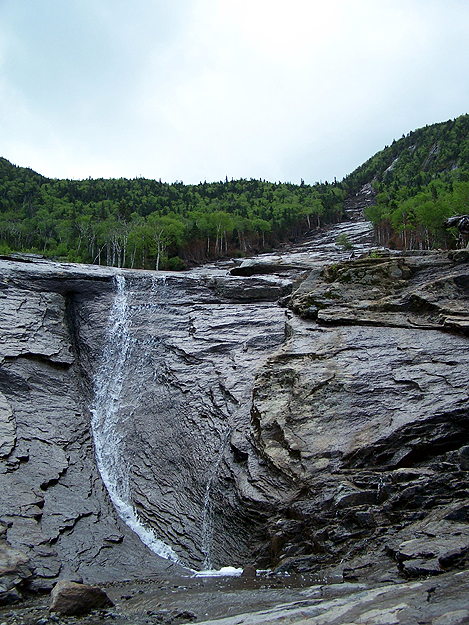 ﻿Glow in the dark newt!
Posted by Chris Dailey at 2:53 PM