Trip Report:
- The last day of January brought an arctic chill and brutal winds to the White Mountains.  Whitney works every Saturday afternoon so in order for us to hike we have to get up early and hit the trails.  This is usually a great thing as we beat the crowds and get to stuff our faces full of food after the hikes.  The downside to this is early morning drives through the notches which can be a white knuckler as the sun fights to come up.  On Saturday morning as we headed up and through Crawford Notch blowing snow flew across Route 302 making visibility minimal.  Luckily, as we turned down an unplowed Little River Road in Twin Mountain we became shielded from the wind, which was a good thing since it was below zero.
-  We quickly geared up and headed along the old Little River Railroad grade.  The Little River Railroad was only in existence for six years or so during the 1890's.  It was about a six mile long track which headed into the Little River Valley for logging purposes.  The railroad paralleled the Little River below the mountains of Hale, Zealand, North Guyot, South and North Twin.  Even though the railroad has been gone for over one hundred years the grade and 'tunnel' is still visible as the herd path from the end of the Little River Road and the first mile along the North Twin Trail still lets a hiker walk over the same ground where the tack once existed. When parking at the end of Little River Road, Please do not block the bridge, do not wear spikes on bridge, and respect the the area and the local home owners who let us use their property to access the mountains.
- One of the gems in the Little River Valley are the Birch Glades of Mount Hale.  The old Fire Wardens path, named the Mount Hale Trail, used to take the warden through the birch glades over easy grades through the beautiful glades up to the summit of Hale where a fire tower used to stand.  The Mount Hale Fire Wardens Trail has been abandoned since the 1960's, however, it still sees a lot of use and is easy to follow.  The only catch is knowing where to locate the start of the old trail!
- On this day, Whitney started off breaking fresh powder along the railroad grade until the start of the North Twin Trail at the end of Haystack Road.  From there I took over breaking trail for a mile until leaving the North Twin Trail and hook onto the FWT just before the third water crossing over the Little River.
- From here the snow levels increased and Whitney took the lead breaking trail for a little bit until I took over for good once we hit the middle of the Birch glades.  It was my third time breaking out the Fire Wardens Trail.  It's one of my favorite trail to break out as it heads through the beautiful open glades where we could see faint ski and snowboard tracks cutting through the trail and heading down through the Birch glades.
- Above the birch glades the trail transitions back to pine gains the ridge where it travels through a section of evergreens draped in Old Man's Beard before heading over a bump, followed by a slight decline before making it's way to the summit.  The snow along the last half mile was becoming more and more drifted and the last quarter mile was some dig time breaking trail, including the last fifty feet before reaching the summit.
- We were the first to summit Mount Hale so it was a cool sight seeing untouched snow which was pretty deep as most of the summit cairn was buried below the snow.  We took a few pics but did not stay too long up there as it was well below zero and you have to keep moving to stay warm in temperatures like these.  We motored down he mountain where I took a few mini shortcuts through the glades down deep snow to cut off some of the switchbacks.
- When we reached the North Twin Trail I froze my hands up really bad, my hot hands were dead, as I probably squeezed them to death.  Luckily, Whitney gave me hers which warmed me up for the quick hike back to the car. On the way out we finally ran into a few other people, two hikers and two skiers.
- We made it back to a now plowed Little River Road just after 11am and high tailed back to North Conway for a yummy brunch at the Sunrise Shack! 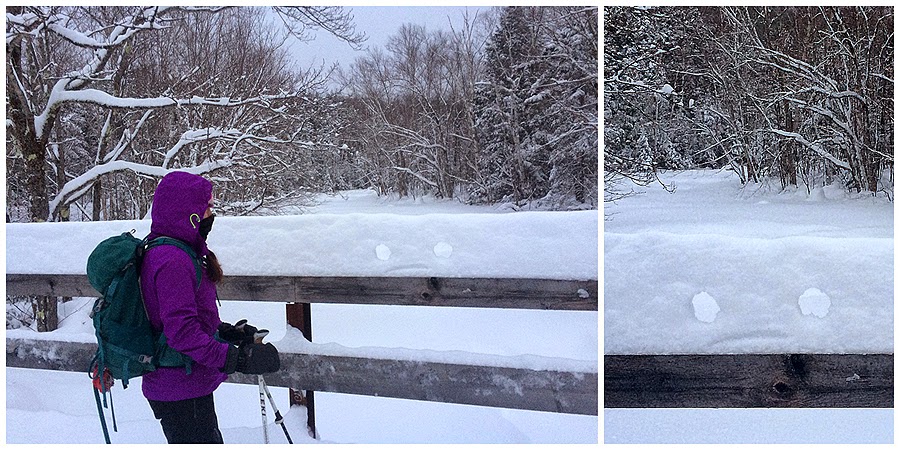 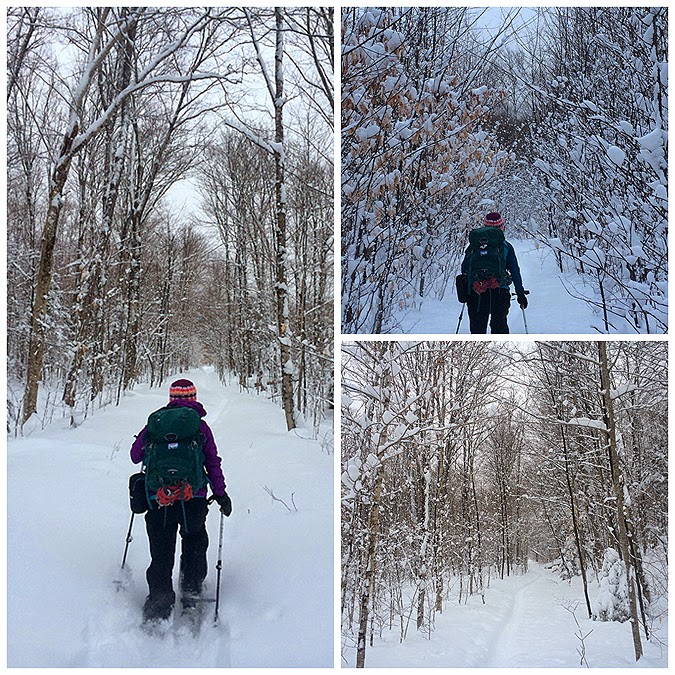 We start off by heading along the old railroad grade 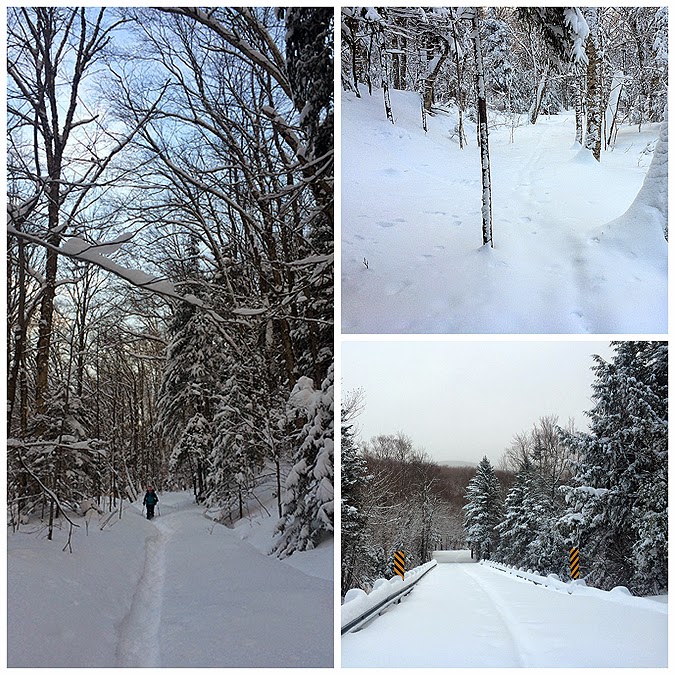 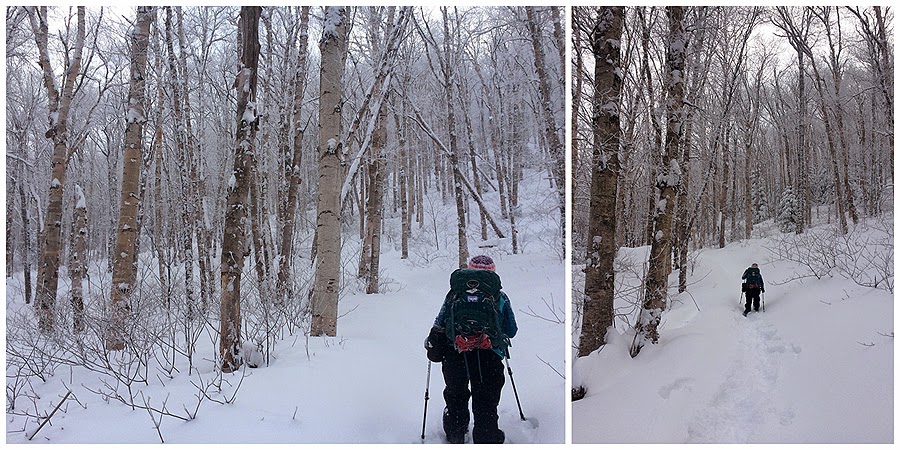 Whitney makes her way into the Birch Glades 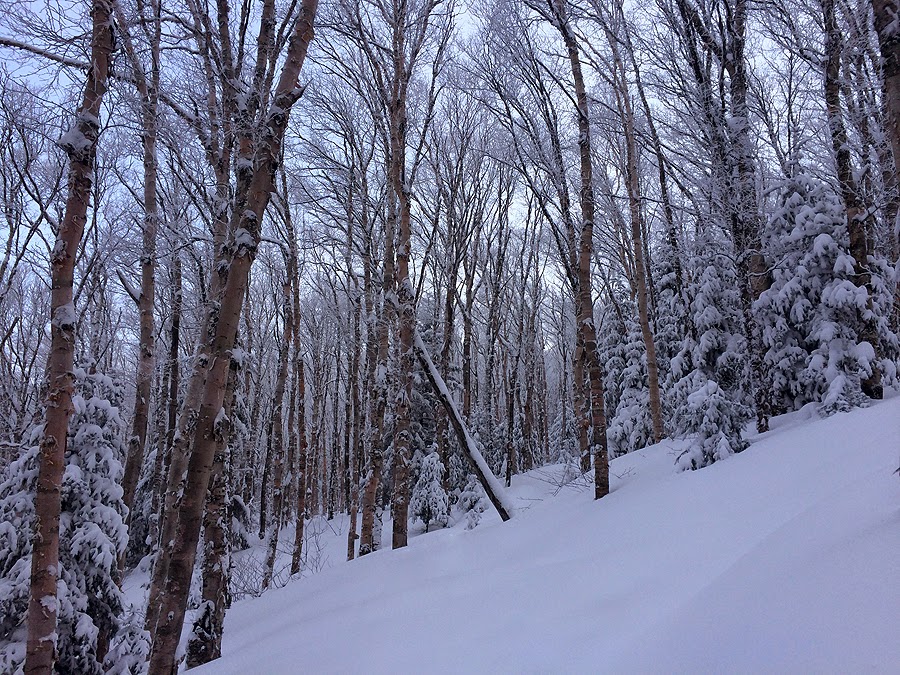 Unbroken snow through a winter wonderland

Breaking trail up through the Birch glades 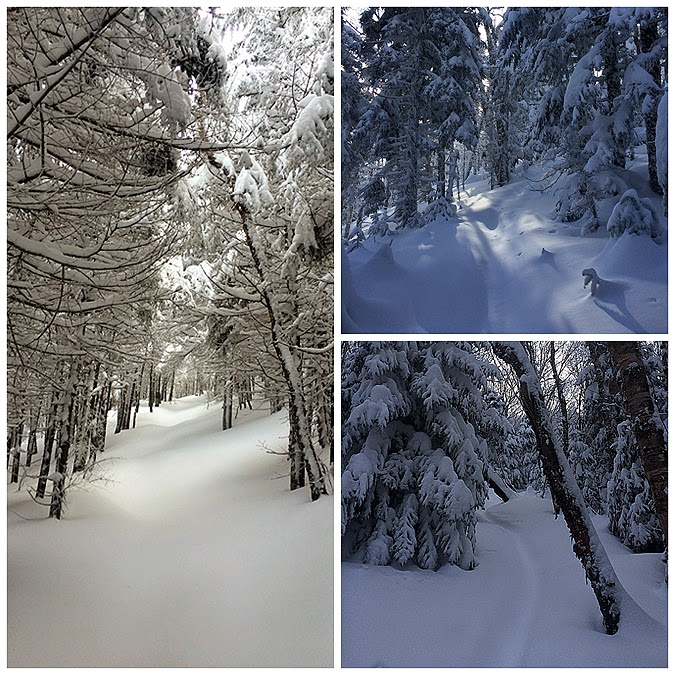 Above the Birch glades the woods transitions back into pine 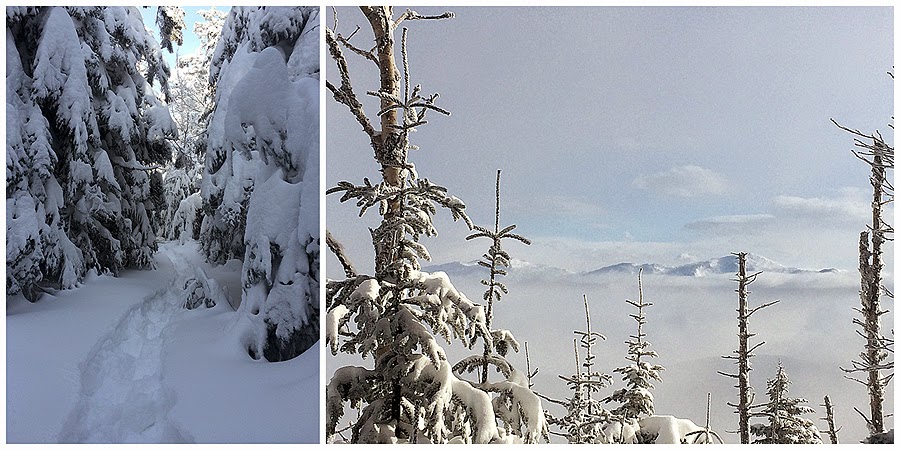 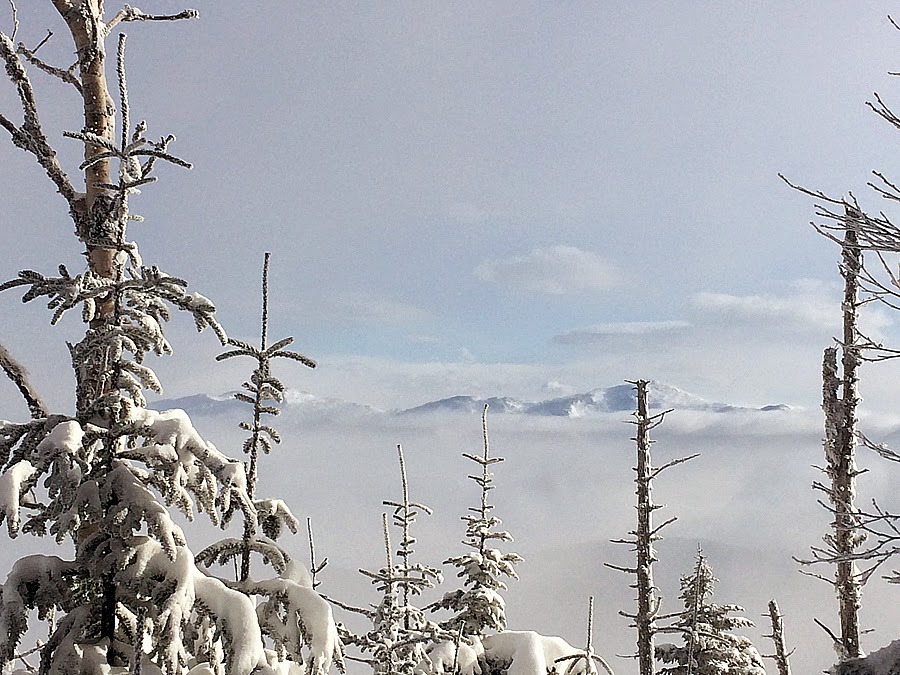 Presidential undercast to the north 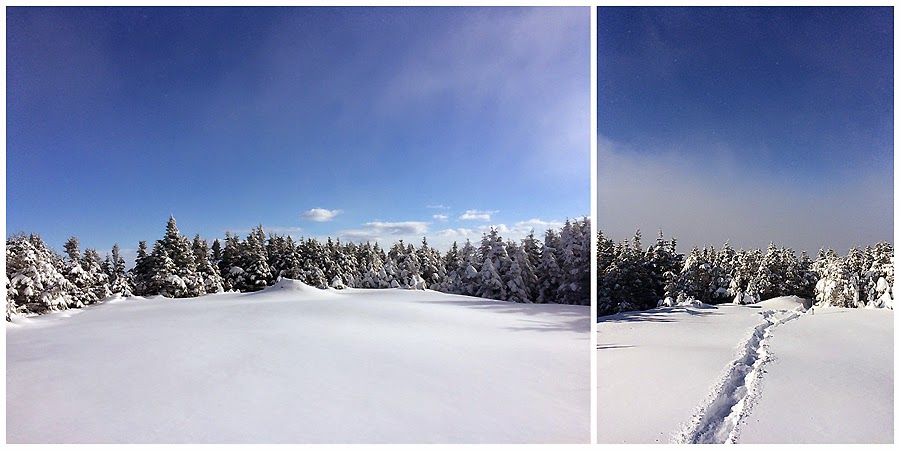 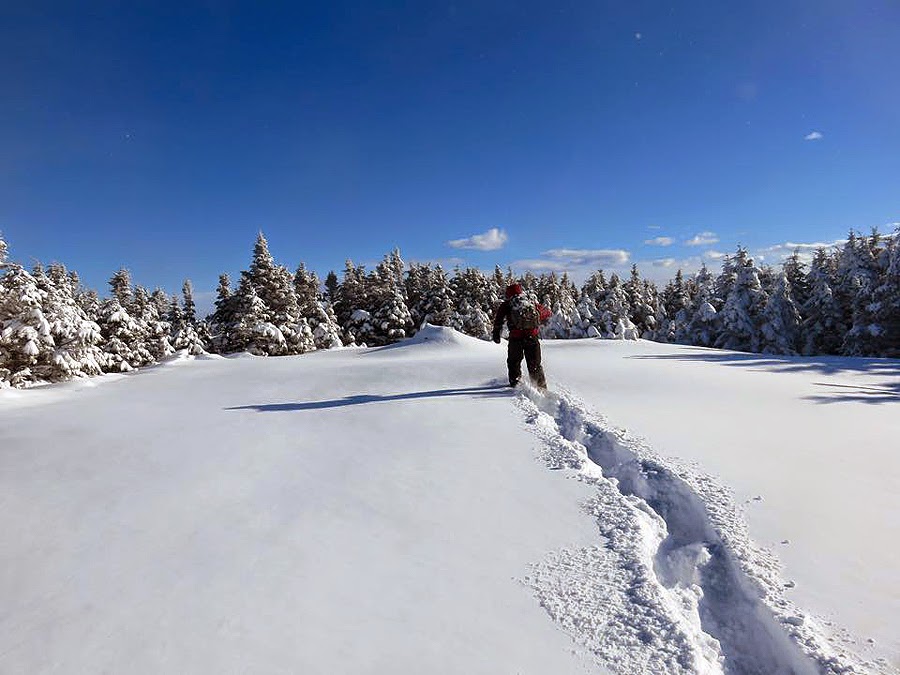 Trudging over to the summit (photo is from Whitney's collection) 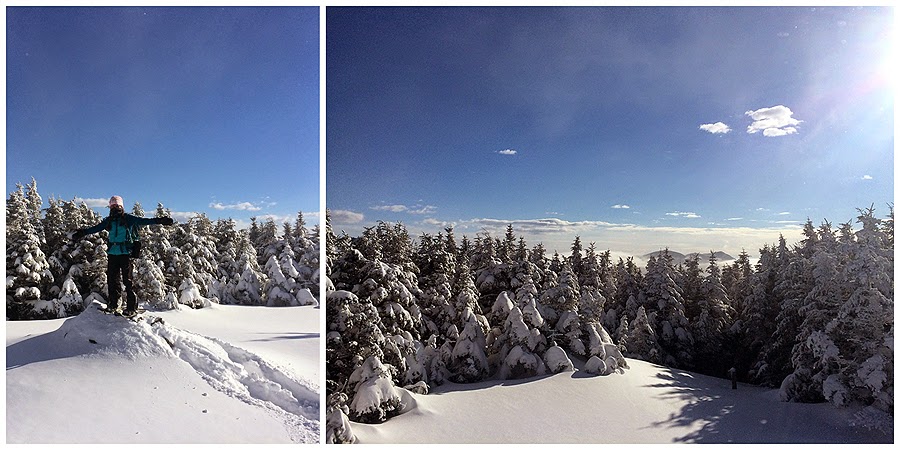 On top of the summit 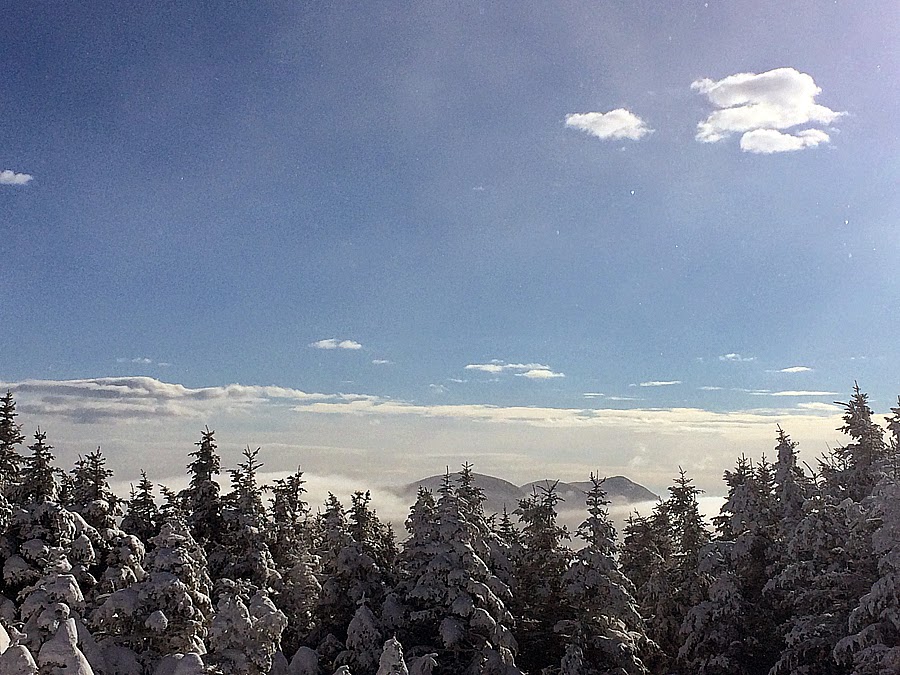 Looking out towards the Willey Range (I think) 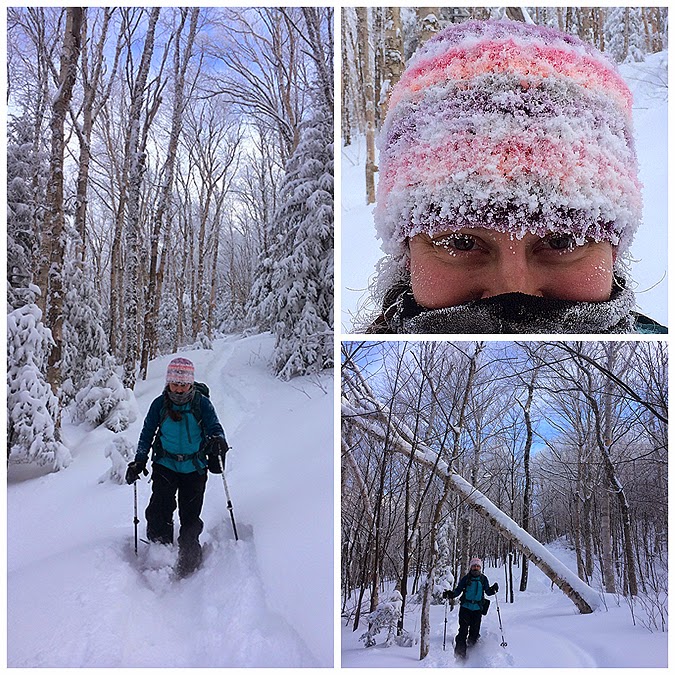 Back down the mountain with a frosted Tip-Toe! 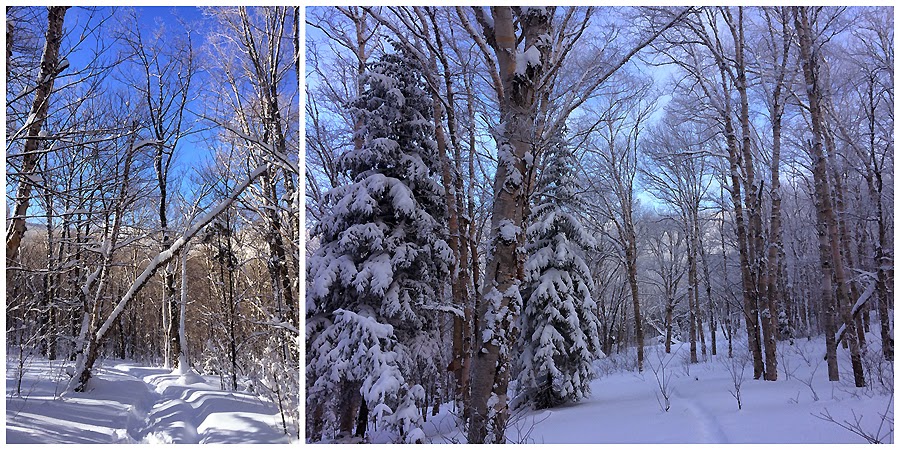 One last section of the glades 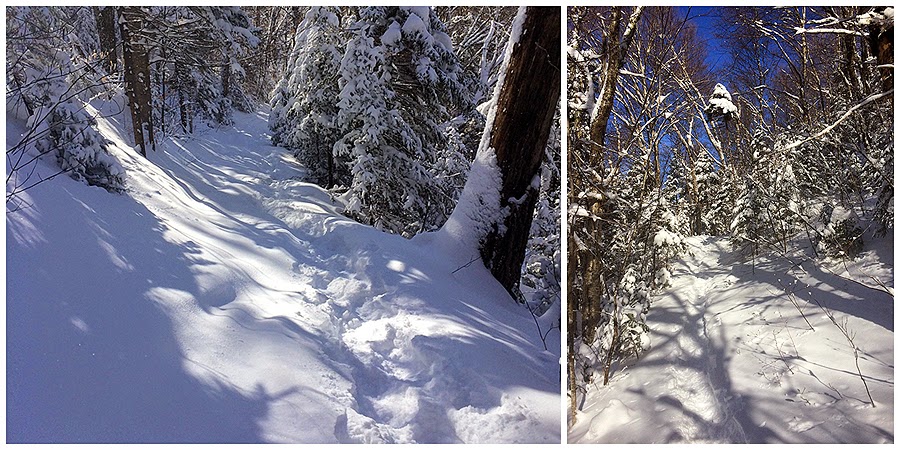 The lower end of the Fire Wardens Trail is a 'ramp' 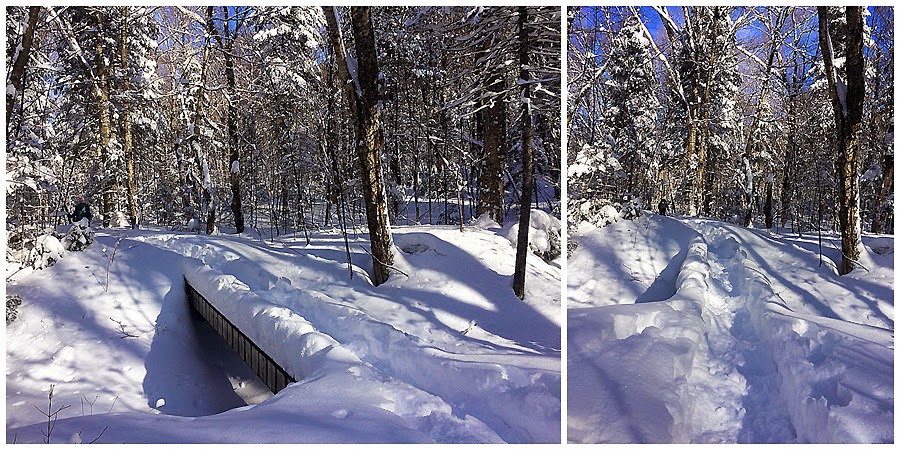 Back out over a now well packed down North Twin Trail 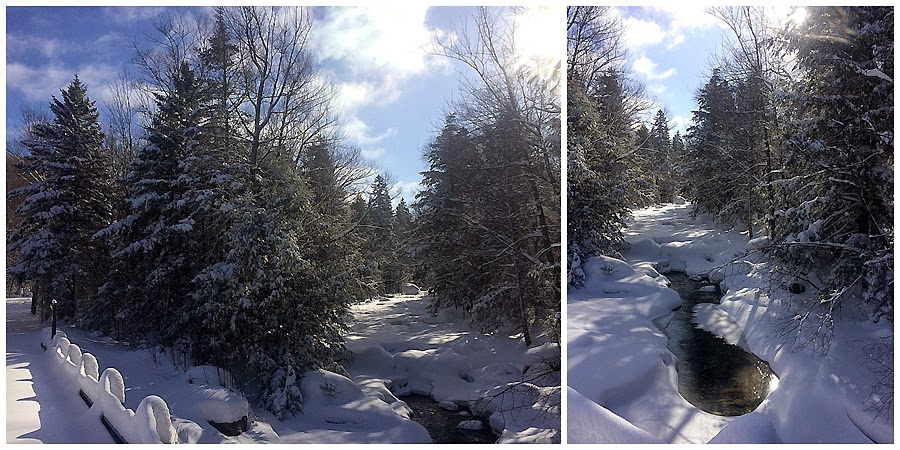 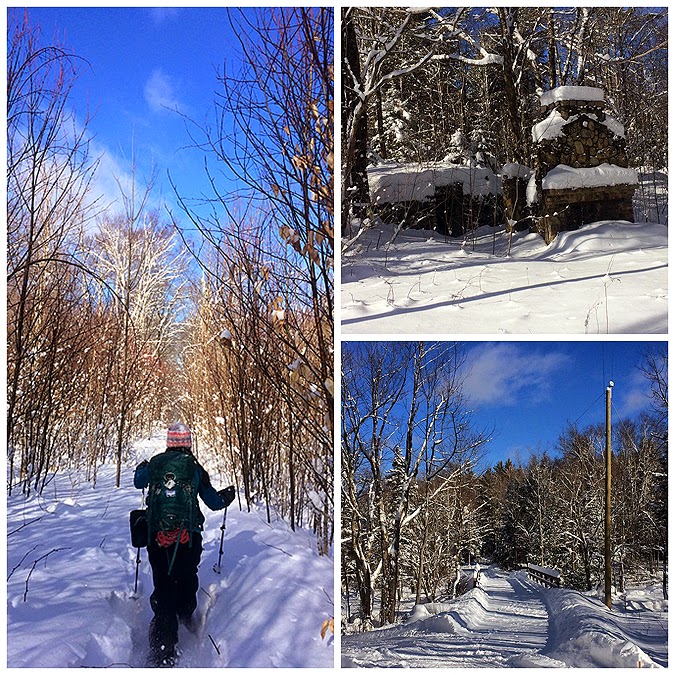 Heading back to the car we stop at the old fire and stone storage space. Please do not block the bridge, do not wear spikes on bridge, and respect the the area and the local home owners who let us use their property to access the mountains.

Route for the day, click here for details
Posted by Chris Dailey at 10:40 AM